Despite Thursday's pop in stock price, ArcelorMittal still faces headwinds with the global steel industry as well as its balance sheet.

What: Shares of ArcelorMittal (MT 1.65%), a leading supplier of quality steel products in all major markets and a major iron ore producer, are rising more than 11% toward the end of trading on Thursday after a couple of developments took place.

So what: First, in the Extraordinary General Meeting (EGM) of ArcelorMittal shareholders held today, shareholders approved both resolutions with a majority. Here's a snippet from the press release regarding the two approved resolutions on the agenda.

Another positive development today was via Morgan Stanley, which initiated coverage and offered an "overweight" rating to its investors. It's the latest in a grouping of upgrades for the stock, as Jefferies recently upgraded the company to "hold"; Goldman Sachs upgraded ArcelorMittal to "neutral" within the last month and a half.

Now what: While these developments are helping the company's share price in the near term, it's still been a struggle over the past year, with the stock losing much of its value. 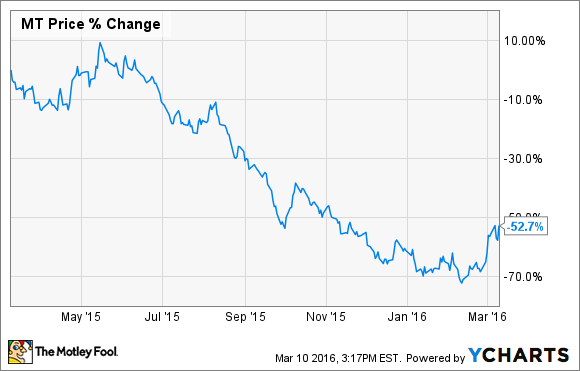 Neither of Thursday's developments will likely help the long-term value of its stock price as China's slowing economy has hindered markets worldwide -- especially hurting companies such as ArcelorMittal which rely on the global steel industry -- even after China recently said it would curb the excess industrial capacity, which could help prices for iron ore.

In addition to China's slowing economy, the company will still have to deal with a huge pile of debt, which was nearly $20 billion at the end of 2015. Investors would be wise to expect a bumpy road ahead for the company despite today's 10% pop in stock price.