The beverage colossus faces a stiff secular headwind as consumers and public authorities are increasingly concerned about the health effects of sugary soft drinks.

With the per capita consumption of soft drinks in decline, there is good reason to believe that the franchise's heyday is over. Image source: public doman.

U.S. stocks are lower in mid-afternoon trading on Thursday, with the S&P 500 (SNPINDEX: ^GSPC) and the Dow Jones Industrial Average (DJINDICES: ^DJI) (DJINDICES: $INDU) down 0.24% and 0.51%, respectively, at 2:45 p.m. ET. Perhaps investors are digesting European Central Bank president Mario Draghi's suggestion that there would be no more rate cuts, which appeared to nullify the announcement of a rate cut and an increase in the ECB's asset purchase program. Shares of Coca-Cola are outperforming slightly, up 0.78%, ostensibly on a bullish report from RBC Capital Markets.

The analyst group called Coca-Cola its "favorite mega cap idea" in the consumer staples sector and pointed to four factors the broker believes investors are overlooking:

1) volume acceleration as a result of refranchising, 2) the importance of Coca-Cola's new approach to marketing and its impact on category growth and market share trends, 3) the growing "cost culture" at the company, which should manifest in best in class profit per employee metrics and 4) the emergence of pricing power for the company.RBC Capital Markets issued a bullish report on beverages giant Coca-Cola, calling it their "favorite mega cap idea" in the consumer staples sector and pointing to four factors the broker believes investors are overlooking:

This article will not examine whether or not these factors are indeed being overlooked; instead, this Fool is more interested in one of the graphs in the report: 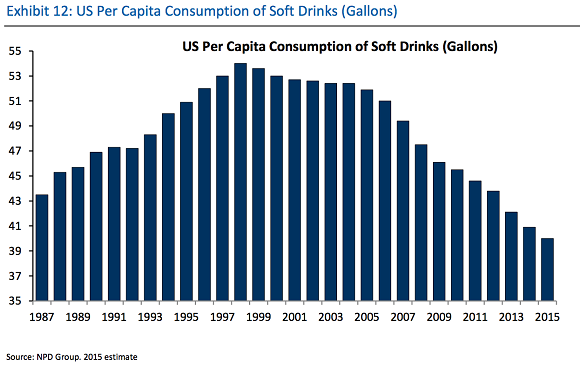 The graph is a stark illustration of a trend that ought to be highly unsettling for Coca-Cola shareholders because it has the potential to swamp the combined effect of the positive factors mentioned over the medium to long term: As awareness of the significant health risks linked to the excessive consumption of sugar increases, Americans' consumption of soft drinks appears to be in irreversible decline.

(Note that the vertical axis of the graph does not begin at zero, which magnifies the perceived decline; nevertheless, per capita consumption fell by more than a tenth between 2010 and 2015.)

Coca-Cola is hardly unaware of this phenomenon. The very first risk it lists in the "Risk Factors" section of its 10-K report for 2015 reads (emphasis in the original text):

Obesity concerns may reduce demand for some of our products... [S]ome researchers, health advocates and dietary guidelines are suggesting that consumption of sugar-sweetened beverages, including those sweetened with HFCS or other nutritive sweeteners, is a primary cause of increased obesity rates and are encouraging consumers to reduce or eliminate consumption of such products.

In fact, concerned by the threat this trend represents to its franchise, the company has resorted to some desperate and unethical actions (notice the use of "suggesting" in the first paragraph of the "Risk Factors" discussion).

On the business front, Coca-Cola is moving to diversify its products range away from soft drinks and is betting on growth markets, where obesity is nowhere the near the problem it represents in the U.S. (notably, in developing economies).

The question is whether they can achieve this quickly enough or on a sufficient scale to replace the decline in their North American soft drink franchise. That's far from clear: For example, total revenue has fallen in each of the past three years (for a cumulative drop of 8%), yet the rate of decline has actually been slower in the North America relative to the rest of the world.

Coca-Cola now faces the same threat that the tobacco industry faced a few decades ago, as consumers and public authorities become increasingly aware that soft drinks are fundamentally unhealthy. 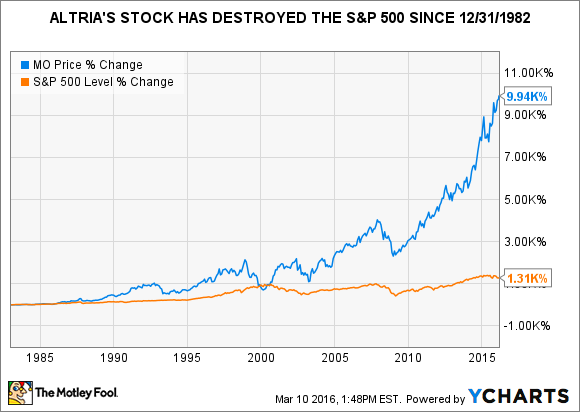 Despite legal wrangles and the decrease in U.S. tobacco consumption, shares of Altria continued to smash the broad market (and note that the graph does not include the effect of dividends, which would add to Altria's outperformance). On that basis, Coca-Cola's shareholders could yet have a golden future ahead of them.

All the same, this Fool is not a fan of investing in businesses that face a growing secular headwind of this type (particularly at 23 times earnings). As far as megacap ideas in the consumer staples sector, I prefer Procter & Gamble, for example.