Oil prices continue to rock oil-related stocks up and down. 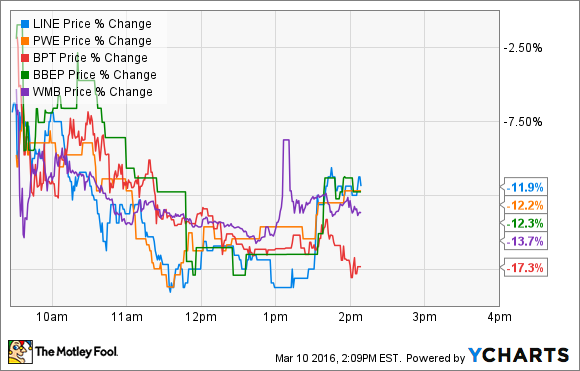 So what: For the most part, it's oil prices again. Oil has been mostly going up since bottoming out in February, with a few off days. Today is one of those, with both Brent and West Texas Intermediate trading down after jumping by 3% and 4% respectively one day ago. Besides oil prices falling slightly on Thursday, there's likely also a lot of short-term trading activity involved, with momentum and short-term traders looking to get in and out quickly, as oil prices continue to drive very high volatility in oil-related stocks.

There's a little more, though. There are rumors circling LINN, related to the potential tax consequences for its investors, if the producer were to restructure some of its debt. Since LINN is an LLC, the tax liability belongs to the investors (that's you if you own LINN shares), which is very different than investing in a typical "c" corporation. In other words, if LINN restructures its debt, there's a tax benefit on the gain in any beneficial tax deduction, and that gain would likely trigger a tax hit for unitholders.

The word is, LINN is working on a way to avoid this. The double-whammy is that not only does this mean there could be the pain of a tax hit if LINN does restructure, but also the likely losses that common unit holders would feel from that restructuring. So there's a chance some investors are getting out now, simply to avoid the potential headache.

Penn West announced fourth quarter earnings before market open Thursday, reporting a much larger net loss than analysts were expecting. At the same time, the producer spent less on capital expenditures than it was projecting, while production volumes still fell above the mid-point of guidance. At the same time, Penn West remains on the cusp of defaulting on its debt, and is actively talking with lenders in an attempt to renegotiate the terms of its debt, including amending covenants.

Like many oil companies, the company's debt has become a serious concern in the face of an ongoing weak oil price environment, and the company is close to falling below the required EBITDA ratio for its debt. The reality is, it may already be in that boat, and the recent oil price recovery won't be enough to bridge the gap before the end of the quarter.

The BP Prudhoe Bay Royalty Trust shares are down sharply Thursday following a press release by CAS Investment Partners, pointing out language in the recent SEC 10-K filing by the trust, describing the risk of payouts falling short of the value of the shares in the trust. This is incredibly important when investing in this trust -- or any minerals trust -- because you don't own shares of a company, but rights to royalties paid on a portion of the production of held in the trust. And when the assets stop paying, you're done, so you better be sure you know what you're getting into.

In this case, CAS Investment Partners points out that the recent payouts of the trust would be worth less than half the value of the trust's shares before the trust were wound down. And while that's probably the worst-case scenario (which would be a product of low oil prices lasting for another several years), it's something investors must consider before investing in this trust. Buyer beware.

For Breitburn and Williams Companies, there isn't any big news, but Williams Companies stock is trading ex-dividend today, which usually pushes a stock's price down. Breitburn, like LINN and Penn West, is an independent oil producer with a lot of debt, and that means its shares will typically be volatile when oil prices move up or down big, or reverse course from what they were doing in days before.

Now what: LINN, Penn West, and Breitburn remain high-risk investments right now. There's a lot of speculation on what will happen with their debt negotiations, but the reality is, it's almost a guarantee that one of them will go bankrupt, and the other two will probably manage to renegotiate their debt without having to file for bankruptcy, but still at some cost to shareholders. The thing is, it's nearly impossible to know what the likely outcome will be for each of them as things stand today, so it's probably best to stay on the sidelines at this point. I own shares of LINN and options for LINN and Breitburn, but they were bought before things got this bad, and I'm not putting good money after potentially bad.

Williams Companies has a lot in front of it, with a pending merger with Energy Transfer still in the works, a big pile of debt of its own to deal with, and the potential impacts of falling U.S. oil production impacting its revenues this year and probably next still weighing on its stock price. The company should be fine, but the uncertainty (and a bevy of better midstream investments out there) make it another stock to avoid today.

BP Prudhoe Bay Royalty Trust is an interesting one. The worst-case seems to be about a 50% loss of capital, with the upside being potentially significant, if oil prices continue to recover over the next couple of years. But like the others above, there are probably better, lower-risk choices now, both in and out of the energy sector.