The company's latest results were in line with guidance but still produced plenty of talking points.

The latest fourth-quarter results from produce freshness company AgroFresh Solutions Inc. (AGFS) didn't produce the kind of violent move created by the third-quarter results presentation, but they were no less dramatic for other reasons.

Following a disappointing opening to life as a listed company, AgroFresh's fourth-quarter results were in line with internal guidance. It also announced, however, the departure of CEO Thomas Macphee, while President Stan Howell will step down at the end of April. Who knew keeping apples fresh could cause so much drama? 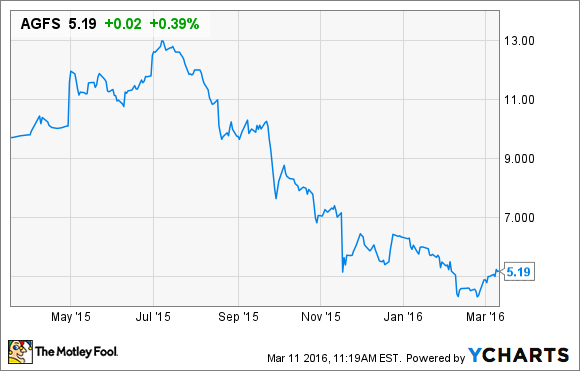 AgroFresh Solutions results: The raw numbers
As discussed at the time of the third-quarter results, it was disappointing that AgroFresh's management didn't give guidance -- it's not the sort of transparency you expect from a newly listed (as of Aug. 2015) company. However, a few days later, management issued a press release "clarifying" comments made in the presentation, and promptly forecast full-year adjusted EBITDA in the range of $87 million to $93 million.

Fast-forward to the fourth quarter, and adjusted EBITDA came in at $90 million, a decline of 9% from 2014. Meanwhile, constant-currency sales declined 3% -- better than the estimated 8% to 10% decline in the global apple crop. (AgroFresh's core product is SmartFresh, a solution helping farmers and distributors manage storage during transportation and reduce wastage, and its primary end market is apples.) Full-year 2015 adjusted operating cash flow was $49 million.

What happened with AgroFresh Solutions this quarter
The key points:

What management had to say
Clearly, AgroFresh is trying to reduce dependence on SmartFresh and/or apples; as such, its priorities for 2016 include investing to generate:

Chair of the board Nance Dicciani highlighted growth priorities in the press release: "We expect to continue to build on our success as we penetrate additional fruits, build momentum for new technologies, expand our market leadership, and enter into new geographies. We are very confident in the long-term fundamentals of our markets and the business."

Looking forward
Until AgroFresh develops meaningful sales of its other products -- or even significant sales of SmartFresh with fruit such as pears or plums -- the company will still be seen as a one-trick pony, susceptible to margin erosion from new entrants in the marketplace such as FYSIUM. Unfortunately, the timing of a soft Northern Hemisphere apple crop -- particularly compared to a strong crop in 2014 -- only served to highlight the risk in relying on one key end market.

No matter what, AgroFresh will be judged by how successful the company is at expanding sales in other markets in 2016 while hoping for a better apple crop in the fall. Meanwhile, the search is on for a new CEO.

Lee Samaha has no position in any stocks mentioned. The Motley Fool recommends AgroFresh Solutions. We Fools may not all hold the same opinions, but we all believe that considering a diverse range of insights makes us better investors. The Motley Fool has a disclosure policy.