Fastenal (NASDAQ:FAST) has felt the pressure from the downward trend in demand from companies associated with the oil and gas industry, as well as the strong U.S. dollar. That said, the company still generates excess free cash flow and has actually grown in-store sales. Earnings and revenue increased 5% and 4%, respectively, year over year in the most recent earnings report. I expect the company to grow free cash flow in the years ahead. Should this thesis play out, it would be just one of the many reasons Fastenal could be a buy right now. Stock prices surged after the company's recent earnings release in January, but shares were still down 11% from the highs in 2014. Let's see if Fastenal is a buy at current levels. 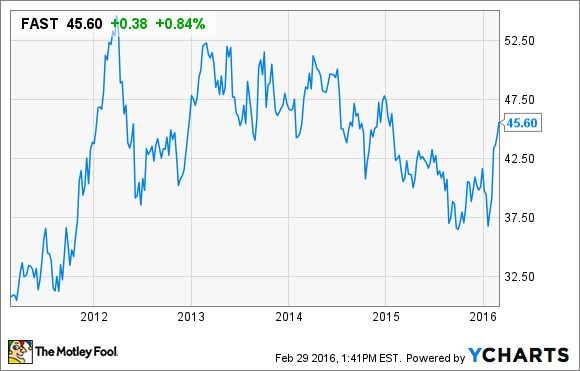 Still a leading business-to-business supplier
Fastenal originated in 1967 as a supplier of threaded fasteners -- screws, nuts, and bolts. Today, although the industry is quite fragmented, the company counts itself as one of the leading sellers of business-to-business supplies to end users. The company sells supplies through 2,637 stores in 22 countries and employs more than 18,000 people. Fastenal has four times as many stores as the next largest competitor.

What makes the company great is its strategy of placing stores next to its distribution network of 14 centers in North America. The proximity of the stores to the distribution centers allows the local stores to operate at a higher-than-average profitability level versus the competition. Fastenal expects to open another 60 to 75 stores in 2016, a rate consistent with that of years past.

Competitive advantages not as troubled as the market indicates
Fastenal has many critics who challenge the sustainability of the company's competitive advantages. Many argue that Fastenal's competitors could easily access the same products through other companies. Substitute products are a legitimate concern; however, Fastenal's business model appears to be far superior to the competition's. At 50.37% and 21.42% gross and operating margins, Fastenal generates abnormally high margins in the industry. Any company producing these kinds of margins will invite competition, but the company's well-placed distribution centers give it an advantage and a barrier to entry because of the high capital outlay involved in building such distribution centers. Also, Fastenal is known as having one of the best customer service teams in the industry.

The company's broad market coverage and in-house distribution give it a scale advantage over the competition, as Fastenal continues to take share from smaller local players. Above-average industry margins should continue as the company continues to roll out on-site industrial vending machines; as of year-end 2015, it had 55,510 vending machines, a nearly 19% increase over 2014.

I believe the company's competitive position is intact for now. The business model should keep potential competitors out for the time being, but investors should keep an eye out for declining margins and revenues.

Long runway for growth
Fastenal's broad product line at convenient locations has helped the company grow over the years. The bundling of products into a "one-stop shop" has significant advantages to the buyer and seller in the form of cost and pricing. Not only does this type of business model create a "sticky" customer relationship, but it also creates unique customer offerings for specific company projects and demands.

The company is positioned well for growth, as management sees the potential for 3,500 stores in North America. The current store count sits around 2,600, leaving plenty of room for growth in North America alone.

Is the worst over for Fastenal?
Fastenal is a long-term play -- its shares aren't for those looking to make a quick buck. Over the last five years, the company has grown earnings 22% and dividends 23% annually. 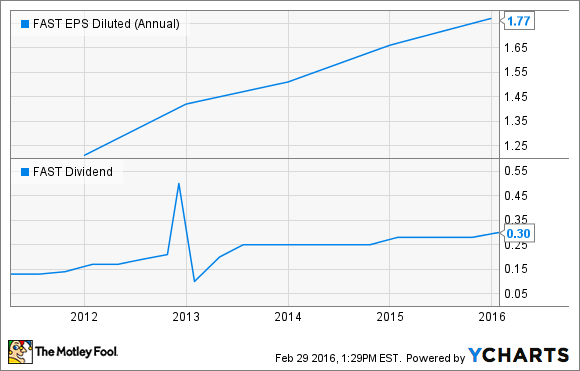 While not cheap by historical measures, the stock appears reasonably priced for a company with sustainable competitive advantages that should compound investors' returns over the long term -- providing you can stomach gut-wrenching volatility until the industry rebounds. It appears the worst may be over for Fastenal.