Please ensure Javascript is enabled for purposes of website accessibility
Log In Help Join The Motley Fool
Free Article Join Over 1 Million Premium Members And Get More In-Depth Stock Guidance and Research
By Tim Brugger – Mar 11, 2016 at 9:15AM

Both digital ad behemoths are on a roll and according to some new data, investors can expect more of the same.

Growth investors would be hard pressed to find two more compelling opportunities than Alphabet (GOOG -1.24%) (GOOGL -1.02%) and its primary competition in the digital advertising space, Facebook (META -0.74%). Both tech giants have unveiled multiple revenue opportunities to drive future growth, including Alphabet's Fiber, Project Fi with its low-cost cellular plan, and smart homes, to name but a few.

Facebook has also spread its revenue wings with the addition of high-priced video spots, taking the monetization wraps off Instagram, and introducing Oculus Rift to the virtual reality (VR) gaming masses. Proactively exploring various ways to enhance revenue streams is rarely a bad thing, and in the case of Alphabet and Facebook, their respective forays also speak to leadership teams with an eye toward the future. 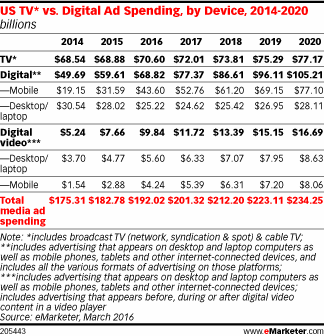 Just the facts
As the world's largest digital advertising market, ad spend in the U.S. is a benchmark for the rest of the world, and that's good news for Alphabet and Facebook. Television has long held the banner as the leading media outlet for marketers, and it was again last year.

According to eMarketer, in 2015 TV ad spend totaled $$68.88 billion, nearly identical to 2014's final tally. Digital ads, meanwhile, generated $59.61 billion in sales, up $10 billion from 2014. This year, as per eMarketer, the gap between TV and digital ad dollars in the U.S. is expected to narrow even further. An estimated $70.7 billion will go to TV spots in 2016, and a whopping $68.82 billion on digital spots. In a sign of things to come, nearly two-thirds of all those digital ad dollars will be directed at mobile device users.

This should be a banner year for online spots, and 2017 should prove even more profitable for Alphabet and Facebook. In what will be a significant milestone, next year digital ad spend won't simply inch past TV spots for the first time ever, it's expected to leave "old-school" alternatives including TV, print, and radio in a cloud of dust.

U.S. marketers will spend an estimated $77.37 billion in 2017 to advertise online, compared to $72 billion targeting TV. Mobile will once again lead the digital way with nearly $53 billion targeting folks on the go. By 2020, digital advertising will drive over $105 billion in sales, with mobile's piece of the pie growing to 73%.

What it means
Not long ago Alphabet was under pressure due to its declining Cost-per-Click (CPC) rate and its lack of a mobile strategy. Alphabet's CPC rate continues to decline -- another 13% in Q4 -- but it hasn't had the same, negative impact as it did a few months ago. The reason investors seem inclined to overlook Alphabet's CPC rates are twofold. One, the number of clicks has risen dramatically in the past year, jumping over 30% last quarter year over year.

Second, Alphabet's mobile strategy has taken hold, which in part has helped drive its growing number of clicks. Mobile is also singled out, as is Alphabet's YouTube property, as a primary driver of its impressive revenue growth. As for Facebook, it's almost laughable now but two years ago it was in the same mobile boat as Alphabet.

Facebook pundits expressed concerns it wasn't ready, even as it became clear the world was going mobile. Facebook has since remedied its mobile "problem," to say the least. Last quarter, mobile ads "represented approximately 80%" of Facebook's ad sales, up from 69% to end 2014.

Alphabet generated $21.33 billion in revenue last quarter, $19 billion of which came from advertising. Facebook relies even more on ad sales, $5.64 billion of its $5.84 billion in total revenue last quarter was ad-related. And if the U.S. digital ad market is any indication, the foundation for Alphabet's and Facebook's continued sky-high ad growth is set for years to come.

Suzanne Frey, an executive at Alphabet, is a member of The Motley Fool's board of directors. Tim Brugger has no position in any stocks mentioned. The Motley Fool owns shares of and recommends Alphabet (A shares), Alphabet (C shares), and Facebook. We Fools may not all hold the same opinions, but we all believe that considering a diverse range of insights makes us better investors. The Motley Fool has a disclosure policy.