It's not easy to track down sales data from different global regions, but here's a look at Ford's three critical markets and what drove their sales gains (or losses) last month.

If you're an investor in Ford Motor Company (F -1.56%) and woke up this morning hoping you could find its February sales data for its three most important markets in one place, you're in luck! It was a very volatile month for the folks at the Blue Oval, posting huge sales gains in the U.S. and Europe, but an equally rough month of sales in China -- though there is more than meets the eye with the latter. Let's take a look at the highlights, and at the context surrounding the figures.

How bad was it really?
Ford's China sales results in February left a lot to be desired, at least until you understand the context around its 9% sales decline compared to the previous year, hitting just over 63,000 units -- a decline that looks even worse than it sounds when graphed, as February is historically a weak month anyway. 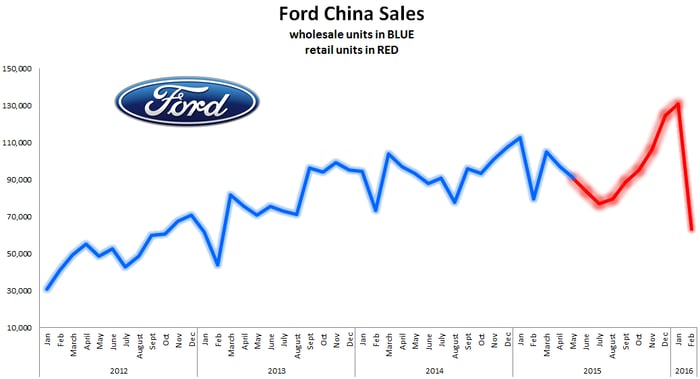 However, what's easy to forget is how much the Chinese New Year impacts production and sales in the region. That's when Chinese factories completely shut down for the holiday, which is officially five days long but often celebrated much longer as employees often take an additional week off or choose to switch jobs at that juncture.

For that reason, investors should average Ford's January and February results and compare the result to the prior period to get a full understanding of how its sales are in the region. When you do that, Ford sold just over 194,000 units in China during the first two months of 2016, which was a very healthy 18% gain compared to 2015.

Ford's year-to-date sales gain of 18% pushed it just ahead of Japanese competitors in the region. Toyota checked in with a 22% gain during the same time frame, good for 190,500 units sold, while Nissan barely trailed the two competitors with 188,400 vehicles sold. Honda found itself further behind, selling only 164,727 units. All of these competitors, though, still trail General Motors by a landslide: It's sold more than 666,000 units year-to-date in China.

One segment Ford continues to focus on is its performance lineup. Those vehicles include the Fiesta ST, Focus ST, and Focus ST diesel, as well as the Mustang. Sales of those performance vehicles almost tripled compared to last year's February, and with the launch of the Focus RS this year, the automaker expects a record-breaking sales performance for 2016.

Also, SUVs remained popular globally, with Ford's EcoSport compact SUV and Kuga (Escape) midsize SUV sales jumping by more than one-third according to Ford. Thanks to the increasing popularity of those SUVs, as well as the soon-to-be launched Edge large SUV in 2016, Ford expects to break 200,000 sales of its SUV lineup for the first time ever -- which would be roughly a 30% gain in sales compared to 2015.

Furthermore, combining Ford's January and February sales results in Europe makes for the automaker's best January/February period in the region since 2010 -- helping to make up for its seemingly poor showing in China.

Last but not least
It's been a volatile start to the year for Ford's sales in the U.S. market, the company's traditional profit engine. Ford kicked off 2016 with a disappointing 3% decline in year-over-year sales, but managed to rebound last month, posting a 20% gain compared to the prior year's February, totaling 217,192 units. Even better is that Ford's retail sales increased 11%, which offset January's larger than anticipated 11% equivalent drop in retail sales.

Of course, with SUVs gaining popularity worldwide, you would expect the trend to be even stronger in America, and that continues to be the case. Sales of Ford's SUVs increased 22% last month compared to the prior year, which was far ahead of the 6% and 5% gained by its car and truck segments, respectively.

One major factor for investors to note was that Ford's F-Series posted a rebound in sales after January's weaker result. February's 10% gain in F-Series sales was enough to top 60,000 units, and drove the truck's year-to-date sales to the positive side, with a 2.4% gain compared to the first two months of 2015. Furthermore, the F-Series continues to rope in strong transaction prices, with ATPs up roughly $1,800 from a year ago.

While great, Ford's February did raise at least one potential concern that investors will want to watch going forward. Ford's total sales increase in February was partially driven by a 36% increase in fleet sales, with about half of those going to rental car companies, which is less desirable. Now the 36% gain can be taken with a grain of salt -- these fleet orders are large and happen at random times, which will throw off year-over-year comparisons. However, investors don't want to see this become a trend. Fortunately, it doesn't appear that will be the case. Ford executives noted that we can expect elevated fleet sales figures through the first half of the year before they taper off and end 2016 just slightly above 2015 levels -- but it's a development worth watching.