Please ensure Javascript is enabled for purposes of website accessibility
Log In Help Join The Motley Fool
Free Article Join Over 1 Million Premium Members And Get More In-Depth Stock Guidance and Research
By Daniel B. Kline - Mar 11, 2016 at 11:30AM

The company made an effort to get ahead of bad news and show that it has a plan for the future.

The market for high-end furniture has struggled, which has been bad news for Restoration Hardware (RH 4.51%). The chain, whose stock has been falling steadily, plummeted in late February after the company released preliminary Q4 results on Feb. 24 after market close. 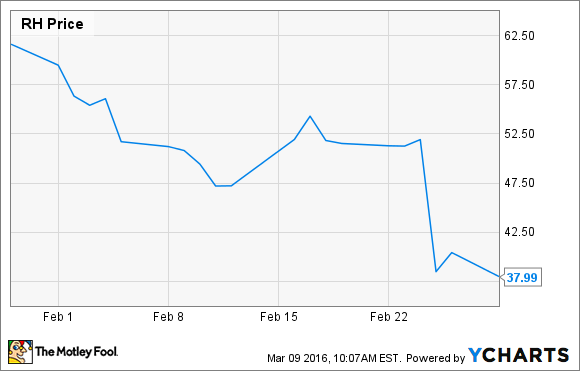 What: Once the numbers went public, Restoration Hardware shares, as you can see on the chart above, went from a slow decline into a free fall. The stock closed at $61.62 on Jan. 29, the last day of trading for the month and stood at $51.92 at the end of the Feb. 24 trading day. The share price then plummeted to a $38.49 close on Feb. 25 before closing the month at $37.99, a 38.34% drop, according to data provided by S&P Global Market Intelligence.

So what: It's not so much that Restoration Hardware reported bad results -- it's just that the numbers did not live up to the company's forecasts. CEO Gary Friedman acknowledged that in the preliminary results press release noting that the company was operating in a changing marketplace. He also admitted that Restoration Hardware needs to adjust its strategies to "optimize performance in the short term, while positioning the company for long-term value creation."

He cited three areas that need to be addressed.

Now what: Give Friedman credit for not only getting ahead of the story but being very forthcoming with shareholders. In his message, he was also relentlessly optimistic that the problems were short term.

"While there is certainly a fair amount of bad news in the quarter, the good news from our point of view greatly outweighs the bad when you put it into the context of our long-term growth strategy," he said. "Despite the economic headwinds, our two key growth strategies – the expansion of our product offer and the transformation of our real estate – are working exceptionally well."

There is, of course, some corporate spin there, but given the problems Friedman identified above, which seem either solvable or short term, an eventual bounceback seems possible.