As a leader in natural gas-fired and geothermal power plants in North America, Calpine looks like a good pick in a depressed energy environment.

There are a few things in the world I don't really trust. I don't trust that a $29 cell phone is really going to cost me $29. I don't trust that Sumner Redstone's ex-girlfriend was in it for the love, and I'm unconvinced that you can get out of a contract with a cable satellite provider without selling your first-born child.

Do you know what else I don't trust? Utility companies.

They're not great for the environment, they're slow to adapt to the changing landscape around them, and many are anti-competitive. I'm not alone in this feeling, and we know that many of these utilities operate today as protected monopolies.

However, they are a necessary evil, as they provide the base-load power that allows us the many luxuries in our lives. While I may not like many of the utility companies that I follow, I do recognize that there may be opportunities from time to time investing in certain types of utilities. And that's why Calpine Corp.'s (NYSE: CPN) business, which revolves around natural gas and geothermal power, could become extremely profitable in the years and decades ahead.

Here's a look at Calpine's business, why I'm interested in this utility.

Largest provider of electricity from natural gas and geothermal
Since its founding in 1984, Calpine has built itself into one of the largest power generators in the United States. Through 83 power plants in 19 states and Canada, the company has more than 27,000 megawatts of generation capacity. It has a strong presence in the competitive wholesale power markets in Texas, California, and the Northeast. The power plants consist of natural gas and geothermal across the nation. 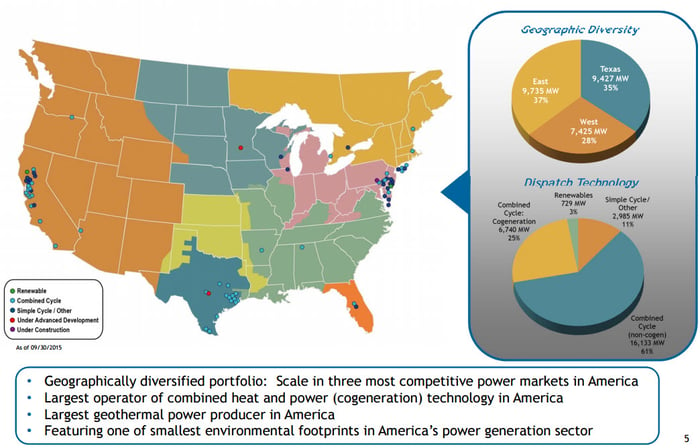 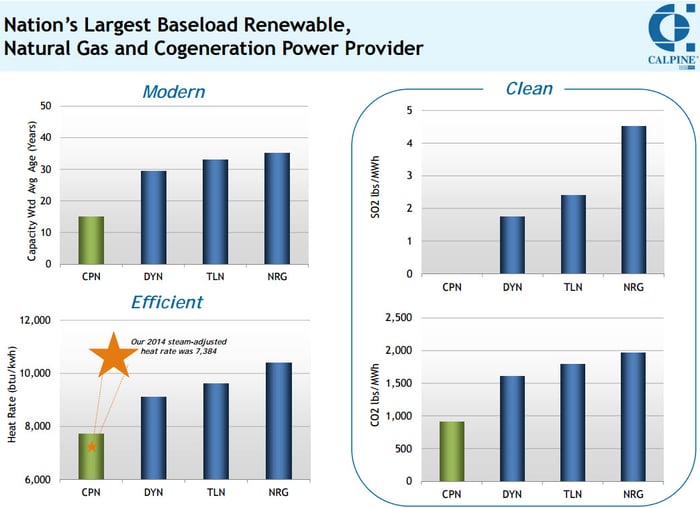 Calpine also has strong competitive advantages with its geographic presence, scale, and low-cost status. The shale revolution, which created a glut of supply on the market, has certainly driven down the price of natural gas, and as a result, Calpine can produce lower-cost electricity from its gas-fired generators. Calpine is well positioned to deliver low-cost electricity well into the future with the now abundant supply of domestic natural gas. In addition, the company is positioned well against environmental liabilities or issues because of its geothermal power plant portfolio, which is cleaner, more efficient, and cost effective versus burning fossil fuels.  .

Calpine has a significant competitive advantage versus its competition, as it positions itself as a low-cost provider in the power generation space. And it has substantially fewer greenhouse gas emissions than its peers, which positions it well for stricter federal and state environmental laws.

High barriers to entry
The power industry is one of the nation's biggest sectors, and it's not going anywhere. The deregulation of the industry generated increased competition from wholesale power producers, lessening Calpine's geographic advantages, yet Calpine still brings incredibly high barriers to entry with essential assets that aren't easily replaced and come at a high cost to compete with or disrupt.

Also, Calpine's high barriers to entry for gas-fired plants should allow the company to take advantage of other trends, such as:

Shareholder-friendly and competent management team
Calpine has generated over $3 billion  of cumulative free cash flow in the past five years. The company has been able to accomplish this level of success through managing working capital at a highly disciplined level, and its capex discipline has helped it focus on reinvesting in things that drive the growth of the business. This free cash flow generation allows the company additional flexibility to repurchase shares, issue dividends to investors, or purchase other businesses.

Management has been extremely shareholder-friendly, having returned $2.7 billion to shareholders in the form of share repurchases since 2011. Overall, management has repurchased an incredible 25% of the shares outstanding since 2013.

Currently, the company isn't paying a dividend, because it sees the repurchase of shares with a projected FCF yield of 15.72% as a better capital allocation strategy. Remember, the FCF is likely to go higher as Calpine continues to repurchase shares. It's difficult to argue that policy. Regardless, the issuance of future dividends will be an added bonus for investors when management deems it the right time. 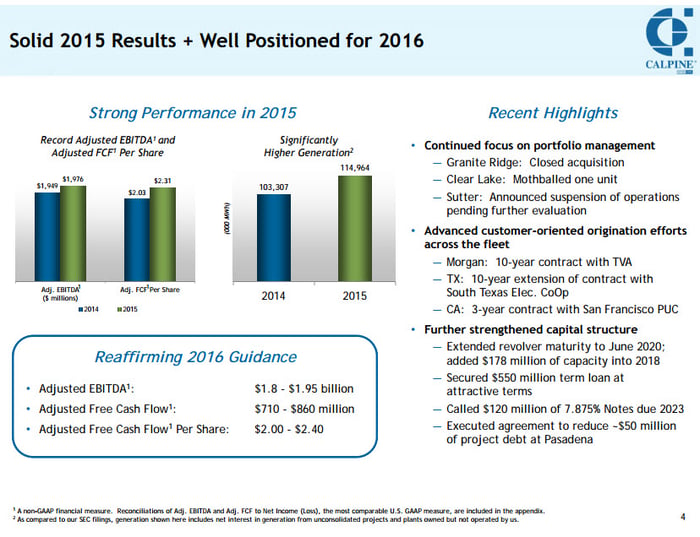 Although I do think we're closer to the end than not, there are just too many variables in the energy market to say which way the wind will blow for commodity prices. However, stock prices are beginning to look very appealing at these levels for many energy-related names (outside of highly levered E&P companies). It could give investors a long window for acquiring a position in a couple of the higher-quality energy companies that could reap huge returns several years down the road.

Calpine could be one of those companies. As you can see in the figure above, management has guided for roughly $710 million in free cash in 2016 on the low end of the range after the massive drop in commodity  prices. That guidance would have shares trading at a P/FCF of 6.36 at current levels based on the current market cap of $4.52 billion (an enterprise value of $15.76 billion). If the company were able to generate this free cash flow number in the next three to five years, shares would be extremely undervalued at current levels.