A major announcement from the Fed and two key quarterly earnings reports are all on tap for investors over the next week of trading.

Stocks moved significantly higher over the last five trading days, marking the third straight week of gains for major indexes. The Dow Jones Industrial Average (^DJI) and S&P 500 (^GSPC -0.09%) each rose over 1% last week, just shy of breaking into positive territory for the first time in 2016. 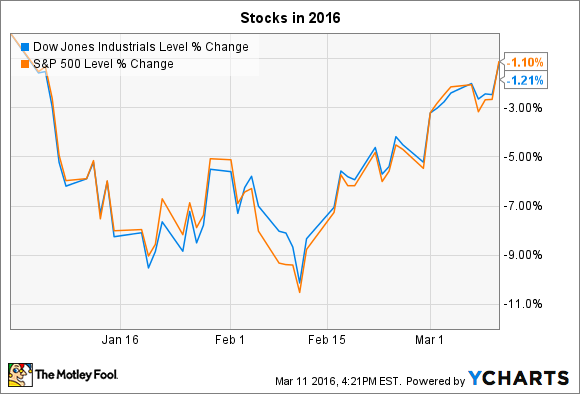 The news that's likely to move the market this week includes a major policy announcement from the Federal Reserve, along with quarterly reports from 3D Systems (DDD -0.10%) and FedEx (FDX -0.97%).

Monday, March 14 -- 3D Systems' 2016 outlook
3D Systems kicks things off by posting its quarterly results before the market opens on Monday. The 3D printing specialist's stock is up over the last three months but has still only recovered a tiny piece of the 70% loss it has endured since last March.

Investor optimism was stoked by two recent developments. First, 3D systems announced last month that it expects to book $183 million of fourth quarter sales, equating to a 2% decline, far better than the 14% plunge that Wall Street had feared.

And in early March, rival Stratasys posted robust quarterly results that pushed the stock up 20%, pointing to an end to the industry slowdown that sent both companies' sales plummeting.

In addition to moderating sales and profit declines, 3D Systems shareholders are hoping for improving profitability metrics as well as a goodwill impairment charge that doesn't exceed $570 million, the high end of management's guidance.

Wednesday, March 16 -- The Federal Reserve's interest rate decision
On Wednesday, the Federal Reserve concludes a two-day meeting, after which it will publish its updated monetary policy statement at 2:00 p.m. EDT. According to a recent survey by The Wall Street Journal, most economists see the central bank declining to raise interest rates this week after boosting them in December for the first time in seven years.

Since late last year, financial markets have endured sharp swings as investors processed a collapse in commodity prices and worried about a global growth slowdown. On the other hand, strong employment gains in the U.S. suggest that fears of an impending recession are overblown. In any case, Wall Street will carefully parse the Fed's statement on Wednesday for clues as to officials' thinking on both the strength of the economy and the projected path of interest rates over the next few years.

We know from UPS and its most recent quarterly report that quicker, more expensive shipping methods are growing faster than traditional truck-based delivery right now. Package volume was flat in the UPS ground segment but jumped 10% higher in the next-day air division.

That points to the potential for decent profit gains for FedEx, which has been hurt by a broad shift in preference toward deferred shipping services. Its express segment logged a major profitability improvement last quarter (margin rose to 9.4% of sales from 7% the prior year), thanks mainly to cost cuts, along with a minor uptick in volume. Shareholders will be looking for more evidence of efficiency gains over the all-important holiday delivery season.

Demitrios Kalogeropoulos has no position in any stocks mentioned. The Motley Fool recommends 3D Systems, FedEx, and Stratasys. We Fools may not all hold the same opinions, but we all believe that considering a diverse range of insights makes us better investors. The Motley Fool has a disclosure policy.