As Alphabet’s Google Fiber continues to target major metropolitan areas, the search giant announced its ultra-fast Internet service is coming to the City by the Bay.

If search represents its past and present, technology titan Alphabet's (GOOG 4.16%) (GOOGL 4.20%) future lies in its various "moonshot" programs.

This approach perhaps de-emphasizes the long-term staying power of present cash cows such as search and mobile apps, but Alphabet's management signaled that it sees major opportunities in the company's Other Bets segments when it reorganized the increasingly sprawling firm last October.

More recently, Alphabet give investors their first window into its Other Bets segment during its fourth-quarter earnings report, which revealed its Google Fiber division as a sizable siphon  for the parent company's cash. However, a recent move for Google Fiber perhaps represents a new trend for its ultra-fast Internet initiative.

Google Fiber comes to San Francisco
Alphabet recently confirmed that it plans to bring Google Fiber to select parts of the City by the Bay, which until recently had been classified as a "potential city." 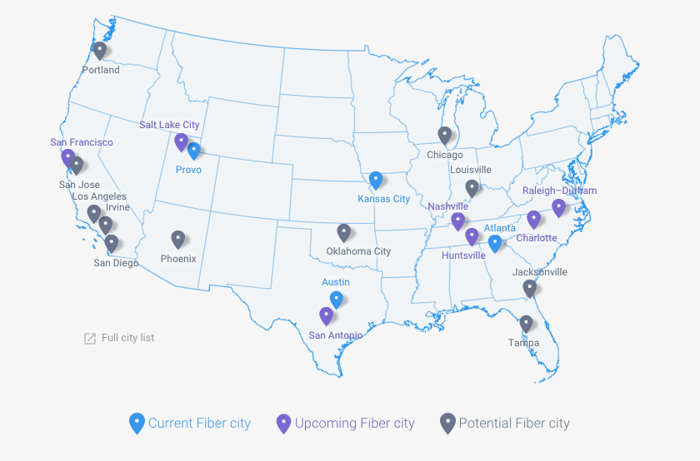 However, Alphabet intends to use a plan similar to its approach for the Fiber rollout in Atlanta, which is still being installed. The strategy has Alphabet purchasing or renting pre-existing fiber optic cables to increase the speed of deployment, while also lowering the cost of installation. This approach stands in stark contrast to current Fiber cities such as Kansas City, where Alphabet footed the bill to install and deploy the service.

While this new strategy might appear a prescient template for all future Fiber installations, it also brings with it some unique downsides as well. Since Alphabet only plans to use pre-installed fiber, the company will have effectively no say in which areas of the city receive the service. As such, Google has said it plans to limit the initial Fiber rollout to multi-unit buildings and public housing developments within the city, though it may extend future growth plans to single-family residences as well. Either way, both its new instillation model and assault on another major American city should have major Internet service providers nervous indeed.

Attack of the Google Fiber
Indeed, much has been made about the potential competitive pressure a gradual, mass-market Fiber rollout could put on major ISPs such as Comcast (CMCSA 0.07%), Time Warner Cable (NYSE: TWC), AT&T (T -0.14%), and more. And here, Fiber's disruptive potential should have investors in the likes of AT&T, Comcast, and Time Warner Cable relatively concerned.

Though Google Fiber's 1 GB/s speed sits well above the nationwide average, ISPs such as Comcast, Time Warner Cable, and AT&T have gradually launched comparable, or even faster, fiber-based services for some subscribers, which at least erodes Alphabet's speed advantage in attracting customers. However, Alphabet typically prices Google Fiber at $70 a month, making it by far the best value among ultra-fast Internet services.

Of course, it isn't immediately clear how profitable Fiber becomes for Alphabet at that price. However, unlike its rivals, Alphabet probably realizes secondary benefit from higher-speed Internet users who enjoy the ability to search and stream content more frequently. At the same time, this isn't to say that Fiber's business plan represents an imminent threat to Comcast, Time Warner Cable, AT&T, and other ISPs in the near term.

The one very sizable chink in the armor of Alphabet's new deployment strategy is that it's largely predicated upon the availability of large chunks of unused fiber lying dormant in metro areas across the country. So while I don't have the municipal information to fairly judge this new strategy's long-term feasibility, Google's recent expansion activity still relies on a widely available supply of subterranean fiber for it to purchase or rent. Should the opposite prove true, Fiber installation costs could again surge, possibly to the benefit of chief ISP rivals such as Comcast, Time Warner Cable, and AT&T.

So while Alphabet's plans to bring Google Fiber to San Francisco represent another major win for the search giant, this news still reflects the latest in what should be a long-term battle.