Shares of Urban Outfitters, Dollar General, and Air Transport Services Group all had an excellent week for investors.

The Dow Jones Industrial Average (^DJI) and the S&P 500 (^GSPC -0.61%) traded flat through most of last week before moving higher toward the end of Thursday's trading session and finishing the week up 1.22% and 1.10%, respectively.

There were a couple of positive developments for the markets to chew on last week. The number of Americans who  applied for unemployment benefits fell by 18,000 during the first week of March to a five-month low of 259,000, according to MarketWatch, which signals a healthier labor market. Also, oil prices moved higher, with The International Energy Agency commenting that prices have been supported by easing supply around the globe – crude prices have moved roughly 40% higher after setting lows last month.

In other news, with earnings season mostly completed, there were a handful of companies posting results strong enough to power them higher last week. Here are some highlights. 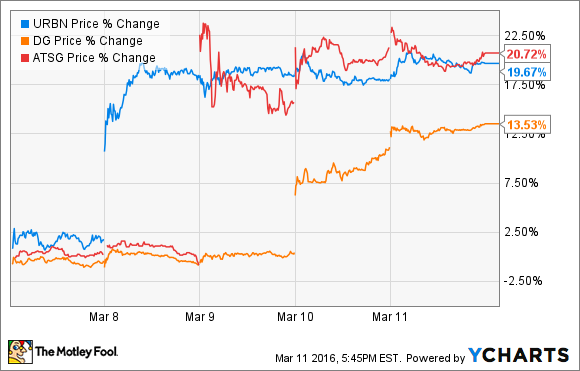 Rebounding retailer
It's been a rough year for many clothing retailer stocks, including Urban Outfitters (URBN -1.42%) which is down 25% over the past 12 months despite surging 45% higher so far in 2016. Shares of Urban Outfitters added to their  year-to-date gains Tuesday after investors digested its fourth-quarter earnings report.

Further, the company's net income declined more than 9%, compared with the prior year, down to $72.9 million. What fueled the shares jump on Tuesday? The only real bright side amid a fairly disappointing fourth quarter was that the company's share buyback program was able to boost earnings per share to $0.61, which was a penny better than the prior year and $0.05 better than consensus estimates.

On the flip side
While shares of Urban Outfitters rebounded despite a weak quarter, shares of Dollar General Corporation (DG 0.11%) moved higher for good reason. Dollar General reported earnings per share of $1.30, which was ahead of consensus estimates of $1.26, and it was a healthy 14% rise compared to the prior year. Consumables, such as tobacco and candy, drove fourth-quarter revenue 7% higher to $5.29 billion. Looking at same-store sales, Dollar General reported a 2.2% gain compared to the prior year. Honestly, though, what's even more impressive is that 2015 marked the 26th consecutive year that Dollar General delivered positive same-store sales growth.

It probably came as a bit of a surprise to many investors as Dollar Tree reported disappointing earnings as well as weak guidance. As icing on the cake, Dollar General also raised its quarterly dividend by 14% to $0.25 per share.

Todd Vasos, Dollar General's chief executive officer, had this to say in a press release: "Looking ahead, Dollar General continues to have significant opportunities for growth. The goal of our long-term growth model that we announced today is to drive 11% to 17% total annual shareholder return per year through EPS growth and dividend yield. ... For 2016, we plan to return approximately $1.3 billion to shareholders through anticipated quarterly cash dividends and consistent share repurchases."

Amazon's move
In an interesting development that doesn't revolve around earnings, Amazon.com announced that it will lease as many as 20 Boeing Co. 767 aircraft from Air Transport Services Group (ATSG -8.95%). After the announcement hit the headlines, Air Transport's stock soared roughly 20% higher for the week.

From Amazon's standpoint, the company is simply taking steps to reduce its reliance on carriers such as UPS and/or FedEx Corp. According to analyst Jack Atkins, as noted in The Wall Street Journal, the deal between Amazon and Air Transport would put the former in control over about 15% of the packages that it ships annually.

Air Transport had been working with Amazon since last summer, according to the company, to demonstrate a fully customized air cargo network could be a strong supplement to existing distribution resources and the deal will enable Amazon to acquire up to 19.9% of ATSG's common stock over a five-year period at $9.73 per share.

This seems to be the first step in a big strategy by Amazon, but it's easily a huge win for ATSG.

Daniel Miller has no position in any stocks mentioned. The Motley Fool owns shares of and recommends Amazon.com. The Motley Fool recommends FedEx, United Parcel Service, and Urban Outfitters. We Fools may not all hold the same opinions, but we all believe that considering a diverse range of insights makes us better investors. The Motley Fool has a disclosure policy.