Here are three reasons oil refiners can continue to deliver solid returns for years to come.

Since Jan. 1, 2015, Phillips 66 (NYSE: PSX) has handily outperformed the S&P 500, turning in a positive return of 17% versus the S&P 500's 4% decline. Valero Energy (NYSE: VLO) has done even better, beating the S&P 500 by over 30% in the same time frame. Although hybrid refiner and distribution company Marathon Petroleum (NYSE: MPC) hasn't done as well, it has still turned in a better performance with that of the broader energy sector ETF, the Energy Select Sector SPDR ETF (XLE).
Crude refiners have been one of the bright spots in the energy sector because they don't need high crude prices to do well. Refiners benefit from the crack spread, or the price difference between crude oil and the petroleum products extracted from crude. Because demand for petroleum products has been robust because of the strong U.S. economy, and crude prices have been weak because of oversupply, the crack spread has been wide, and many refiners have been extremely profitable.
Although the crack spread has come under pressure after Congress lifted a 40-year-old crude export ban in December and the spread between Brent and WTI has narrowed in dollar terms from 2014 levels, there are several reasons to believe the sector can deliver solid returns for the years to come, including strong demand for refined products, low energy costs for domestic refiners, and steady buying by a famous investor.  Keep reading to learn the details.
Strong demand for refined products
Because the U.S. economy is in full-steam-ahead mode, demand for high-margin refined products such as gasoline and diesel is expected to remain strong. Based on his research, Morgan Stanley's Evan Calio expects refined product demand to more than absorb new capacity additions for 2016. Calio believes global growth would need to slow substantially before strong demand for refined products weakens enough to change the bullish outlook.  Given that the ECB and other central banks around the world are doing everything that they can to stimulate growth, a global slowdown that weakens refined product demand enough isn't very probable at the moment.
The repeal of the crude export ban won't affect oil refiners much in the short term either. Given that it currently doesn't make much economic sense to export WTI because the spread between WTI and Brent doesn't cover the transportation costs, Phillips 66 has said that the lifting of the export ban will have no material impact on the company's financials for at least a year.
Location, location, location
Perhaps the greatest advantage independent refiners have is their location. Because many of their refineries are in the United States, Phillips 66 and Marathon Petroleum have access to cheap natural gas, which lowers their energy bills and increases their profits (refining is very energy intensive given the boiling and processing). 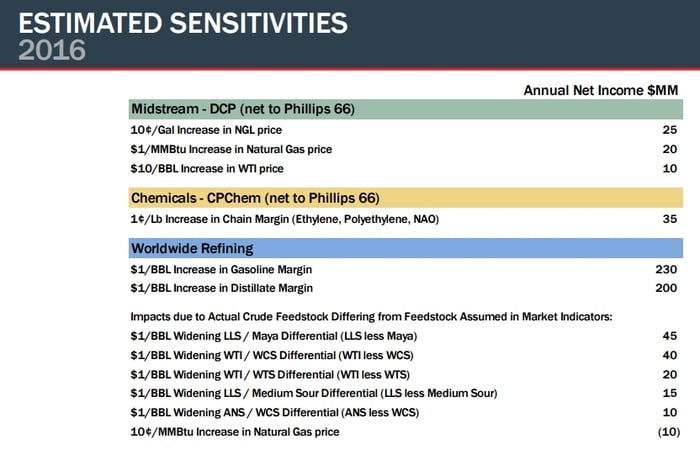 According to the above presentation on the company's 2016 sensitivities to various changes, Phillips 66's annual profit declines by $10 million for every 10 cents/MMBtu increase in the natural gas price. Given that over 80% of Phillips 66's crude processing capacity is inside the U.S. and natural gas prices in the United States are anywhere from $3/MMBtu to $7/MMBtu cheaper than European or Asian natural gas prices, Phillips 66 enjoys an annual $240 million-$560 million competitive advantage versus its more international competitors. To put the number in perspective, Phillips 66's total adjusted earnings for 2015 was $4.2 billion and the company is expected to make roughly the same amount for 2016, meaning that the Phillips 66's cheap energy advantage increases its earnings anywhere from 6% and 15%.
Given the advances in shale technology in recent years, cheap natural gas could be the new normal. . That means independent refiners with all or the majority of their operations in the United States will continue to earn high margins and good returns on capital while their more international competitors lag.
Warren Buffett Loves Phillips 66
Another reason to love oil refiners is that Warren Buffett's Berkshire Hathaway has been steadily buying Phillips 66. Buffett initially established a position in Phillips 66 in early 2015 and gradually built his position up from that point. In early February 2015, Buffett added another 1.69 million shares, giving Berkshire a total of 74 million shares, or around 14% of Phillips 66's shares.
Buffett's purchases of Phillips 66 is good for all refiner investors because it shows that Buffett thinks Phillips 66's profits aren't something that will attenuate or disappear if energy conditions change. If Phillips 66 profits are more durable, other refiners' profits could be more resilient than expected. The purchases also show that Phillips 66 is a typical 'Buffett' company with a wide-moat, consistent cash flows, and durable competitive advantages given its economies of scale. If Phillips 66 is a 'Buffett' company, Valero and Marathon Petroleum are to a lesser extent 'Buffett' companies because they also have wide-moats and durable competitive advantages.
Investor takeaway
Although Congress repealed the crude export ban, Phillips 66, Valero Energy, and Marathon Petroleum still benefit from several favorable factors, including decent U.S. economic activity, low domestic natural gas prices, and substantial barriers to entry. Those factors, along with Warren Buffett's purchases of Phillips 66, endorse the idea that refiners can deliver sustainable earnings that make their current sub-12 P/E valuations look cheap. In addition, given their low payout ratios and their expected next five year average earnings growth rates of between 5% and 9% annually, each of the three refiners have secure dividends that will likely steadily increase over time.

TMFJay22 has no position in any stocks mentioned. The Motley Fool owns shares of and recommends Berkshire Hathaway. We Fools may not all hold the same opinions, but we all believe that considering a diverse range of insights makes us better investors. The Motley Fool has a disclosure policy.