The company faces a seemingly endless string of struggles that are worrying investors.

First, a bit of background
Healthcare payers are steadily beating the drum that drug prices are on an unsustainable path upward, and according to Express Scripts, the average price of a brand-name drug sold in the United States has increased 164% since 2008. Given the price of medicine is increasing far faster than inflation, it's little wonder that a firestorm was ignited last September when news broke that the now infamous Martin Shkreli's Turing Pharmaceuticals had acquired Daraprim, a 60-year-old drug, only to jack up its cost by 5,000%.

That revelation put acquisitive company's like Valeant Pharmaceuticals under the microscope for similar, albeit less egregious behavior. Initially, Valeant was called out publicly for acquiring and increasing the price on Isuprel and Nitropress by 537% and 237%, respectively, last year. However, research by Deutsche Bank last October also found that Valeant Pharmaceuticals increased prices by an average 65.6% on 54 other medicines in 2015.

Intense scrutiny of the company resulting from pushback on its pricing strategy led to questions regarding the company's relationship with the specialty pharmacy, Philidor. Specifically, industry watchers began wondering if Philidor's filling of patient scripts with Valeant's more expensive drugs, rather than less costly generics, created a relationship that was too close for comfort. Questions regarding improper accounting of sales made through Philidor were also raised.

Valeant responded to allegations by launching a review of its accounting practices, and so far, that review has discovered $58 million in previously reported sales that were recorded when they were shipped, rather than when they were sold. Valeant's review is ongoing, so it's uncertain if other accounting problems will eventually come to light.

Paying the piper
Valeant Pharmaceuticals' CEO Michael Pearson has broadly eschewed internal R&D in favor of M&A and that's made Valeant one of the industry's most acquisitive players.

Until recently, top- and bottom-line growth resulting from Valeant's continuous string of acquisitions trumped the fact that those deals were saddling the company with more than $30 billion in long term debt.

However, now that Valeant's torrid acquisition pace has ground to a halt and the company's struggles have given management little opportunity to buoy investor confidence with presentations touting its "next big deal," investors are left digesting a mountain of negative news that has left them increasingly pessimistic about Valeant Pharmaceuticals' future. 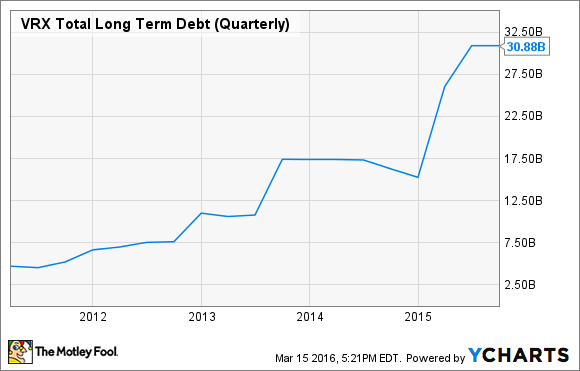 Challenges continue
The list of headwinds facing the company is undeniably long.

Push-back from payers has led Valeant Pharmaceuticals to shutter Philidor, and that's causing sales to slip as generics start getting prescribed more frequently than its own drugs.

To offset that dip in sales, Valeant inked a consignment deal in December with Walgreens Boots Alliance. Under that agreement, Valeant will sell drugs directly through Walgreens' stores that can be used instead of generics, and that will be sold at prices that are competitive to generics. Ultimately, the agreement should allow Valeant to push more volume out the door, but it's not clear what the impact will be on the company's profit.

Patience is warranted to see if this deal pans out. However, investors don't have much patience left to offer following today's report of the company's unaudited fourth quarter financials.

Unfortunately, Valeant's outlook for the full year isn't much better.

Stakes are high
In addition to the company's top- and bottom-line struggles, there's also a risk that the company runs afoul of covenants on its bonds.

Because the internal review of its accounting hasn't wrapped up yet, the company can't file its financials with the SEC, potentially violating a bond requirement. Conceivably, debt holders could respond to the filing delay by delivering a notice of default to the company that could limit the company's access to its credit line. If so, then it could put Valeant in a bit of a cash crunch.

Looking forward
Politicians are proposing various policies to end runaway price increases which could limit Valeant's upside. Also, the ongoing review of its books could result in unfriendly restatements of its financials. And there's no guarantee that the deal with Walgreens will pan out as hoped, or that debt holders will let Valeant slide.

Given that backdrop, Valeant's far from a risk-free investment. However, investors with a longtime horizon and a penchant for risk and might find some value in Valeant. Valeant has valuable products and brands, including Bausch & Lomb, and despite its issues, it remains profitable. If Valeant can get its act together, then picking up shares when they're trading at a single digit multiple to expected earnings may make sense.