Should you invest in the market leader or the underdog of the networking equipment market?

Cisco (CSCO -0.76%) and Juniper (JNPR -1.20%) are two of the four biggest networking equipment companies in the world. IDC reports that market leader Cisco controlled 59.2% of the global Ethernet switching market in the fourth quarter of 2015. Juniper, which ranks fourth in that market after Huawei and Hewlett-Packard Enterprise, controlled just 3.8%.

However, Juniper's Ethernet switching revenue rose 16.7% in 2015, while Cisco's only inched up 1%. Juniper's market share is also growing as Cisco's is gradually declining. So, which networking equipment stock is a better buy today -- the market leader or the growing underdog?

Top-line comparisons
Cisco's revenue slipped 0.1% annually to $11.93 billion last quarter, which still beat estimates by $170 million. Excluding the set-top box business it sold to Technicolor, for both quarters, revenue rose 2% to $11.83 billion. Cisco's brightest spot of growth was its service provider video business, which posted 37% sales growth thanks to soaring demand in China. Security sales grew 11%, collaboration sales grew 3%, and its routing sales improved 5%. Those four units generated a third of Cisco's revenue during the quarter. Deferred revenue rose 8% to $15.2 billion thanks to growing demand for its software and subscription offerings.

However, revenue at its data center and switching businesses, which together accounted for 36% of Cisco's sales, respectively fell 3% and 4%. Soft demand in the U.S. and the EMEA region (Europe, Middle East, Africa) also wasn't completely offset by double-digit growth across the Asia Pacific region. For the current quarter, Cisco expects to post 1% to 4% annual sales growth -- which easily beats consensus estimates for a 1% decline.

Juniper's revenue rose 20% annually to $1.32 billion last quarter, beating estimates by $20 million. Revenue at the routing and switching businesses, which accounted for 65% of its sales, respectively rose 24% and 21% annually. Security solutions revenue rose 20% and accounted for 9% of Juniper's top line, while other services revenue rose 12%. Unlike Cisco, Juniper posted double-digit sales growth in the Americas and Asia, which was only slightly hurt by a 2% decline in EMEA revenue. However, Juniper's guidance for 9.7% sales growth in the current quarter missed more bullish expectations for 11.5% growth because of macro concerns.

Looking further ahead, analysts expect Cisco and Juniper to respectively post 8% and 12% annual earnings growth over the next five years. Based on those forecasts, Cisco currently has a 5-year PEG ratio of 1.5, while Juniper has a PEG ratio of 1. This means Juniper is "cheaper" than Cisco based on its earnings growth potential, but it still can't be considered "undervalued" since the PEG ratio hasn't dropped below the 1.0 mark.

Dividends and buybacks
While Juniper is fundamentally cheaper, Cisco's forward annual dividend yield of 3.7% is more than double Juniper's 1.5% yield. Cisco has raised its dividend for five consecutive years, while Juniper hasn't hiked its dividend since introducing one in 2014.

Over the past 12 months, Cisco has paid out 34% of its free cash flow as dividends, and another 23% on buybacks, which lifted its EPS. Last quarter, Cisco committed another $15 billion to its buyback program, bringing the total allocation to $16.9 billion -- enough to buy back about 12% of its outstanding shares at current levels.

During the same period, Juniper paid out 22% of its free cash flow as dividends and another 151% on buybacks, which were mainly fueled by debt. Juniper didn't authorize any new buybacks, but it noted it had returned $3.6 billion to shareholders in buybacks and dividends since the first quarter of 2014, and it plans for that figure to reach $4.1 billion by the end of this year. 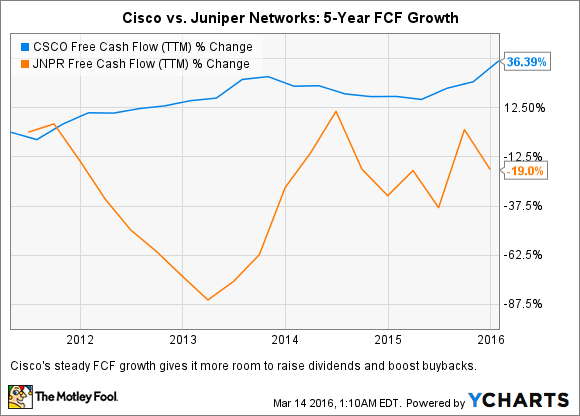 The verdict
Choosing between Cisco and Juniper is tough. Cisco has a higher dividend, a more diversified business model, and a more aggressive inorganic growth strategy, but Juniper is growing in markets where Cisco isn't, and its double-digit growth and low PEG ratio make it look like a cheap growth stock. For now, I think Cisco is a better buy because it's a more stable, income-generating play in a volatile market, but I'll keep an eye on Juniper to see if it becomes cheap enough to be considered a value play.

Leo Sun has no position in any stocks mentioned. The Motley Fool recommends Cisco Systems. We Fools may not all hold the same opinions, but we all believe that considering a diverse range of insights makes us better investors. The Motley Fool has a disclosure policy.