Just because you're investing in the gambling industry doesn't mean it should be a complete gamble.

MGM Resorts International (MGM 1.82%) has made some big bets lately, including major expansions in Las Vegas, Macau, and the U.S. Northeast. That expansion has come with a hefty price tag of added debt during a time when the company is posting only modest earnings. Meanwhile the stock price is down nearly 10% year to date.

So just how risky is MGM Resorts' stock now? Looking at regional trends, MGM's business decisions, and its financials, it's less risky than its peers, including Las Vegas Sands (LVS 0.33%) and Wynn Resorts (WYNN 0.58%). Let's start with the regions the company is betting on now.

MGM's low-risk regional bets
Macau's gambling industry grew to a record $45 billion in 2013, after the Chinese government opened up to foreign casinos in the early 2000s. Two years ago, however, the government created regulations that pushed Macau's revenue back down to around $30 billon in 2015. The companies with the biggest bets there, including Las Vegas Sands and Wynn -- with 66% and 75% of total revenue at one point, respectively -- have been crushed by this downturn. MGM only ever had about 33% of its revenue tied to Macau, so the downturn there has affected it less. 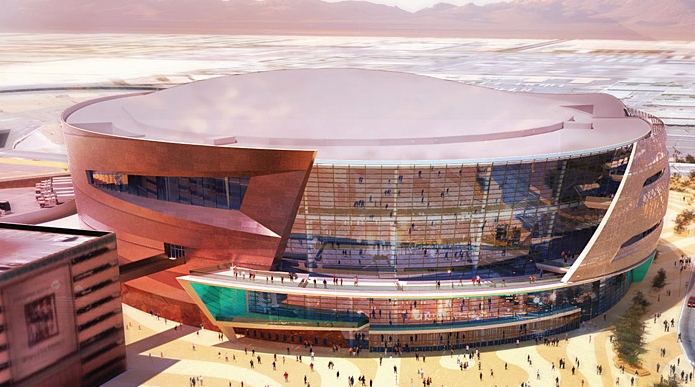 A rendered view of what the MGM and AXS arena is expected to look like when it's complete. Source: ArenaLasVegas.com.

MGM has kept the majority of its bets in Las Vegas, where it owns more properties than any of other company and has more than a quarter of all hotel rooms. MGM is betting on far more than just casinos and hotels in Vegas, though. It's also focusing on convention space, with its new 20,000-seat arena scheduled to open this summer and other convention space construction under way. Las Vegas itself is not immune to macroeconomic risks, but the economy there is more diversified than Macau, with gambling, hotels, convention space, dining, and live entertainment. This diversification helps to limit MGM's risk.

Finally, MGM Resorts has been building its new National Harbor resort in Maryland, which is planned to open later this year. The resort will be one of the biggest in the region, on a 1.7 million-square-foot property outside Washington D.C. Coming up soon after will be another casino resort in Massachusetts slated to open in 2017. With limited competition and a more populated region compared with Las Vegas or Macau, these resorts also appear to be at low risk of failure.

The big risk: a heavy debt load
MGM's debt load has ballooned in recent years to now over $12 billion, making it the most indebted company in its industry. The former debt leader, Caesars Entertainment (CZR), declared bankruptcy for its largest subsidiary and is undergoing a restructuring because its debt levels became unsustainable. Compare MGM's debt to Las Vegas Sands at just $9.47 billion or Wynn at $8.75 billion, while MGM's total cash is just $1.67 billion compared with Las Vegas Sands and Wynn Resorts, each with over $2 billion in cash.

MGM certainly has a much more solid cash position than Caesars did before it started restructuring, and its situation doesn't look dire at this point. Still, this debt load is definitely a major risk if some of MGM's bets don't pay off as expected. Investors should be paying attention to MGM's current ratio, or the company's ability to use liquidity for current debt obligations. Usually 1.5 is a safe current ratio, and MGM falls short at 1.08. Below 1.0 is when investors should start to worry more, though the company at least looks to be moving in the right direction this year. 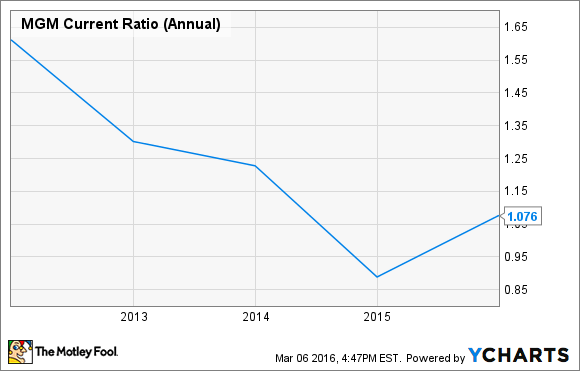 Still one of the safer bets in the industry
MGM Resorts International has been a lower-risk stock over the past two years compared with Las Vegas Sands and Wynn Resorts, which dropped 41% and 61%, respectively, since March 2014, while MGM stock dropped a more tolerable 30% during the same time. While that's still a rough two years, it's less risky than other industry bets.

MGM continues to look like the lower-risk option going forward. It does face risk, particularly with its debt position, but because of its diversification by region and also by focus on non-gambling revenue, MGM looks to be the safer option.

Bradley Seth McNew owns shares of Las Vegas Sands. The Motley Fool is short Caesars Entertainment. We Fools may not all hold the same opinions, but we all believe that considering a diverse range of insights makes us better investors. The Motley Fool has a disclosure policy.