These charts give a quick glimpse into why Royal Caribbean's stock looks undervalued, and what to expect in the coming months and years.

Royal Caribbean Cruises (RCL -0.19%) operates 25 ships, which together carried 5.4 million passengers in 2015. While the company continues to expand worldwide both in number of ships, brand names, and passenger capacity, what's happening with its stock?

After dropping around 30% from December 2015 through this February, the stock has gotten to the point that it seems cheap, as the company increases earnings, dividends, and capacity. Here are three charts that offer a snapshot of the stock's growth potential. 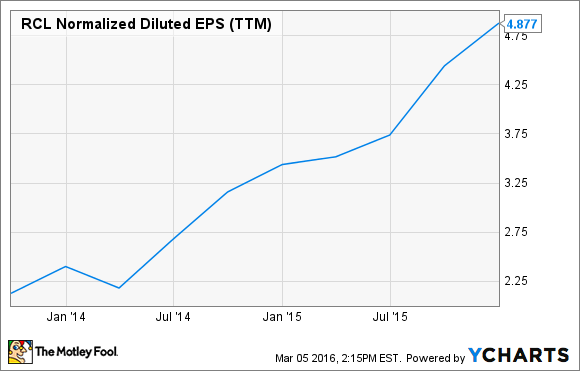 Earnings for fiscal 2015, released on Feb. 2, disappointed many analysts, which has pushed the stock lower after an already tough past few months. However, CEO Richard Fain sought to reassure long-term investors, stating in the earnings release:

Our core brands are firing on all cylinders, our new ships are performing exceptionally well, and our costs are well controlled. This is driving 40%-plus earnings growth in two consecutive years. These very gratifying results [and] position us well on our path toward Double-Double.

2. Dividends are growing nicely
Royal Caribbean's dividend yield is a modest 2.1%, just below the S&P 500 average of 2.3%. However, dividends paid have grown steadily in the past few years, and the yield seems low only because the stock price has also grown along with the increasing dividend -- up until the past few months, at least. With earnings increasing as rapidly as they are, it appears that Royal Caribbean will maintain this trend and raise its dividend further in 2016. 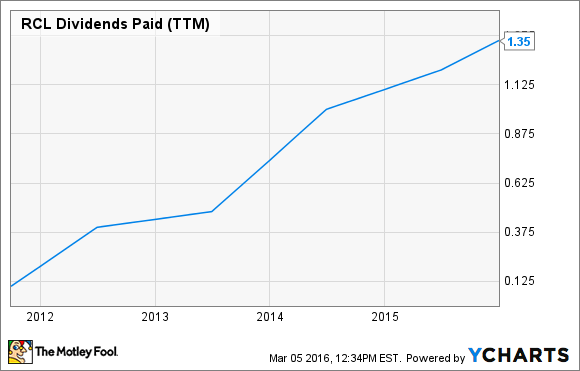 3. Is Carnival crushing Royal Caribbean?
For all of its capacity growth in recent years, Royal Caribbean still booked less than half as many cruise passengers in 2015 as its largest competitor, Carnival Cruise Lines (CCL 3.67%). 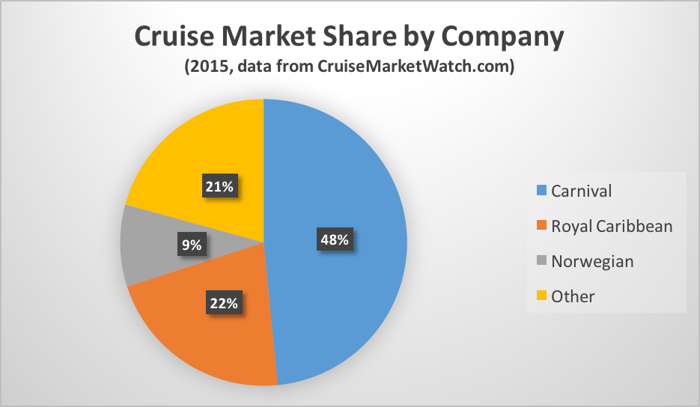 However, there's little reason to believe that Royal Caribbean can't impede on Carnival's massive market share. The total global cruise market is estimated to expand from 22.2 million passengers worldwide in 2015 to 25.3 million by 2019. Much of that market growth is due to demand in China, an area of growth that Royal Caribbean is striving to capitalize on by increasing its capacity for China cruises from 6% of its total in 2015 to 9% in 2016 and more in the coming years.

Time to jump on board?
Royal Caribbean stock has been hammered so far in 2016, putting its current price at just 24 times earnings compared to the S&P 500 average of 23 times earnings. However, this current price is just 10 times estimated 2017 earnings, meaning that this pullback could be a great time to buy and hold this stock for future growth. There could certainly be more challenges ahead, such as a potentially unstable Chinese economy, fuel prices that start to rise again, and new competition. Still, with rapidly growing earnings, a steadily rising dividend, and opportunity for increased capacity growth, this looks like it could be a good time to jump on board Royal Caribbean stock.