Please ensure Javascript is enabled for purposes of website accessibility
Log In Help Join The Motley Fool
Free Article Join Over 1 Million Premium Members And Get More In-Depth Stock Guidance and Research
By Daniel B. Kline - Mar 18, 2016 at 11:01AM

One company has potential while the other sort of is what it is.

Would you rather own the stock of the fourth-place wireless carrier or a company that could be described as either an irrelevant also-ran or an up-and-comer in the pay-television/broadband fields?

Essentially that's what you're considering when you weigh whether Sprint (S) or Frontier Communications (FTR) represents a better stock buy. Neither company leads its industry, nor does either have a real chance of making a run for the top of its respective field. In both cases, however, there is upside, and in many ways Sprint and Frontier are following similar approaches.

The two companies present themselves as alternative to the major players in their fields. Sprint and Frontier are generally cheaper than their bigger rivals and both market aggressively based on that fact. In Sprint's case, that involves its half-off promotion which offers to cut consumers' bills from other providers in half (it really only halves the service plan part) and Frontier's aggressive introductory pricing.

In theory, those tactics could help both companies grow, but in practice the ship has probably sailed on one, while the other at least has a chance to show it can hang with the big boys. 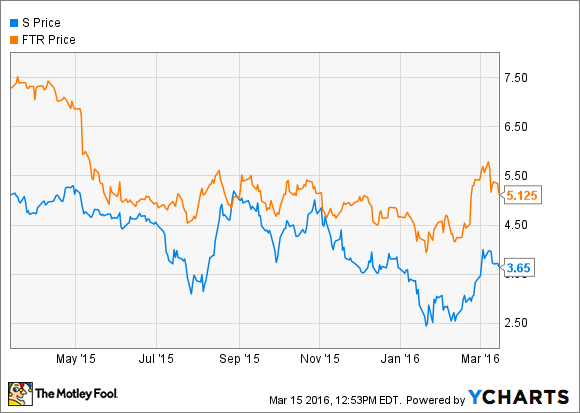 The case for Frontier
As a cable and Internet provider, Frontier has really just entered the game having recently received regulatory approval to complete an acquisition which will more than double its size. When the deal closes, which it is expected to do on April 1, the company will add 3.7 million voice connections, 2.2 million broadband connections, and 1.2 million video connections, according to a press release.

The challenge for Frontier will be holding onto those customers. In Q4 of 2015, the company dropped 0.7% of its residential customer base and lost 1.7% of its business customer. But for the full year, it did post an impressive-for-its-size net add of 102,000 broadband customers while losing 38,000 cable customers, which was in line with industry norms.

And when you consider buying Frontier over Sprint, it's worth remembering that even though it has borrowed heavily to expand, the growing cable company paid a $0.15 dividend per share each quarter in 2015, a practice it continued in Q1 2016. Sprint does not offer a dividend.

The case for Sprint
Sprint has a much larger customer base than Frontier -- about 58 million paying users, according to Statista -- but it has fallen from third to fourth in the wireless industry. Perhaps more important than its ranking is the fact that Sprint sits behind T-Mobile (NASDAQ: TMUS), a faster-growing company which uses the same cheaper-than-AT&T-and-Verizon (the industry leaders) marketing angle.

That has put Sprint in a difficult position when it comes to growth. For example, in Q4, it had total net additions of 491,000 compared to 967,000 in the prior year quarter. That's a decent showing, but it's well below T-Mobile, which added 2.1 million net customers in the year's final quarter and an astounding 8 million for the year (whereas Sprint barely topped a million in net adds for all of 2015).

The challenge for Sprint -- and it's a large one -- is that it's not viewed as a top-tier player nor is it the go-to discount carrier.

Why Frontier is a better buy
While a Sprint turnaround remains possible, CEO Marcelo Claure has really only succeeded in stopping the company's rapid decline. It's pretty clear that the carrier will remain in fourth place and there's really very little reason to believe it can change its fate. That's not to say Sprint won't continue to grow or that Claure won't find ways to eek out more profitability, but it's hard to see much upside.

Frontier on the other hand is on the beginning of a major growth journey and it might be able to become a competitor in its new markets as a low-cost alternative. While that's shaking out -- and it may take years -- the company has been, and should continue to be, quite willing to pay its shareholders a dividend for the privilege of using their money.

Neither one of these companies is a clear winner, but Frontier has more upside and a healthy dividend to compensate you while you wait for the company to execute. Those two factors make its shares a better buy than Sprint's.