The two healthcare REITs have a similar focus despite a big difference in size. Should you invest in the little guy or the massive incumbent?

With the huge baby-boomer demographic entering its senior years, elder care is a big business right now. That's good news for investors in real estate investment trusts that focus much of their resources on the provision of senior housing facilities.

Two notable REITs that have drilled into this niche are Welltower (WELL -0.59%) and National Health Investors (NHI -0.72%). Let's see how they stack up against each other, and which one might be more worthy of inclusion in your stock portfolio.

The senior senior housing provider
Welltower is the original senior housing REIT, having opened for business in 1970. Since then, it has snowballed in size to over 1,400 properties (mainly in the U.S., but with a few in Canada and the U.K.) and over $26 billion in net property assets.

Nearly two-thirds of its portfolio consists of senior housing, with the remainder occupied by post-acute care and outpatient medical facilities. As advertised, the former is a sweet spot right now given the advancing years of the boomers. Also, the population of senior citizens in the U.S. is projected to grow sharply over the coming decades.

That has helped Welltower perform quite well lately. The company's funds from operations (a key profitability metric for REITs that strips out depreciation and smaller line items from net profit) rose a healthy 17% on a year-over-year basis in its fiscal fourth quarter.

The REIT can't build facilities quickly enough. The occupancy rates of the senior housing facilities it operates on its own (as opposed to leasing to outside parties) rose slightly in Q4 to stay at just over 90%, even with the company having completed around $1.5 billion in investments during the quarter.

In addition to its own development, Welltower keeps its eyes open for acquisitions. Late last year, it snapped up Canadian senior housing operator Regal Lifestyle Communities, purchasing it with a joint-venture partner for around C$764 million ($573 million).

Healthy nation
National Health Investors is a minnow next to the whale of Welltower. Incorporated in 1991, it has fewer than 200 properties, all of which are located in the U.S. In terms of business focus, though, it's roughly similar, with 62% of its facilities dedicated to senior housing (other types of medical properties occupy the remainder).

Occupancy isn't quite as high as that of Welltower, but National Health Investors' facilities are rather full nevertheless at nearly 88%. Like its monster peer, it's actively building new properties and growing through acquisitions. One recent notable recent buy is a 98-unit assisted living facility near Olympia, Washington.

The REIT has done a good job drawing profit out of both new and existing assets. Its rental income more than tripled from the 2012 to 2015 fiscal years. Narrowing the window to the most recently reported quarter, this metric rose by 28% on a year-over-year basis to nearly $55 million. (Welltower's figure for the comparable period was 13%).

Meanwhile, funds from operations saw a big 83% gain across the same stretch of time, rising to almost $68 million.

Size matters
On several key measures -- current and across the past few years -- the two REITS are fairly similar despite their great disparity in size.

The dividends are nearly identical ($0.86 for Welltower versus $0.90 per share for National Health Investors), and since their stock prices are very close, the dividend yields nearly match (in the low 5% range). 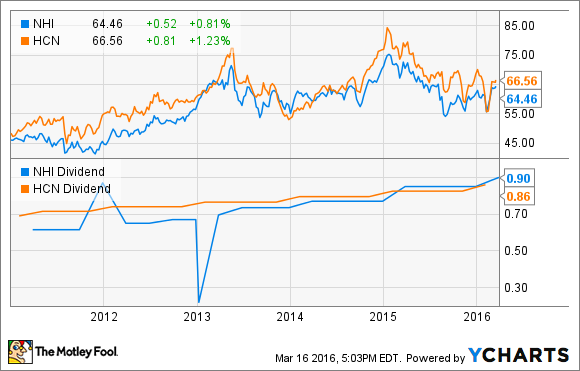 Growth in FFO has also been in the same ballpark, with the metric rising by 166% since 2012 for the former and 150% for the latter. 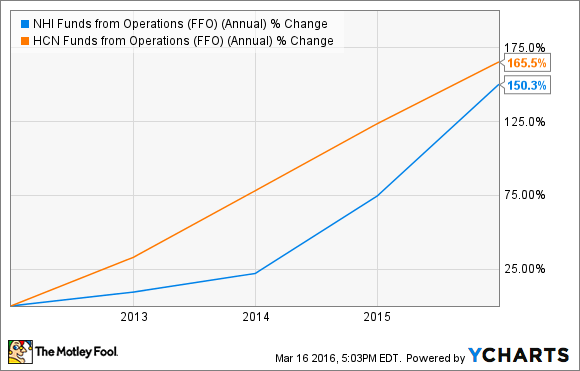 It almost makes this race too close to call, but I think the little guy has the edge here.

At the end of the day, these are two high-quality REITs active in a segment with a bright future. It was hard to choose between the two as, in my opinion, they're both quality stocks well worthy of investment.

How Welltower's Dividend Cut Will Help It Grow
413%