The gamer market may be the obvious place to start promoting virtual reality, but social media is where it's liable to really heat up.

The first market for virtual reality devices is the world's billion plus gamers, a fact not lost on Facebook (META 3.01%) CEO Mark Zuckerberg. As Zuckerberg put it when announcing the $2 billion deal to acquire VR headset manufacturer Oculus in 2014, "The Rift is highly anticipated by the gaming community, and there's a lot of interest from developers in building for this platform."

However, the Rift, which will begin shipping this month, wasn't the first Oculus-designed VR device to hit the streets however. The initial taste of an Oculus virtual experience came courtesy of Facebook VR partner Samsung (NASDAQOTH: SSNLF) late last year with the release of Gear, an inexpensive smartphone-based device. Be it a Gear or a Rift, Zuckerberg recognizes gaming is just the tip of the VR iceberg. Virtual reality will become "a new communication platform," he predicts, and Facebook has decided that transition will happen sooner rather than later. 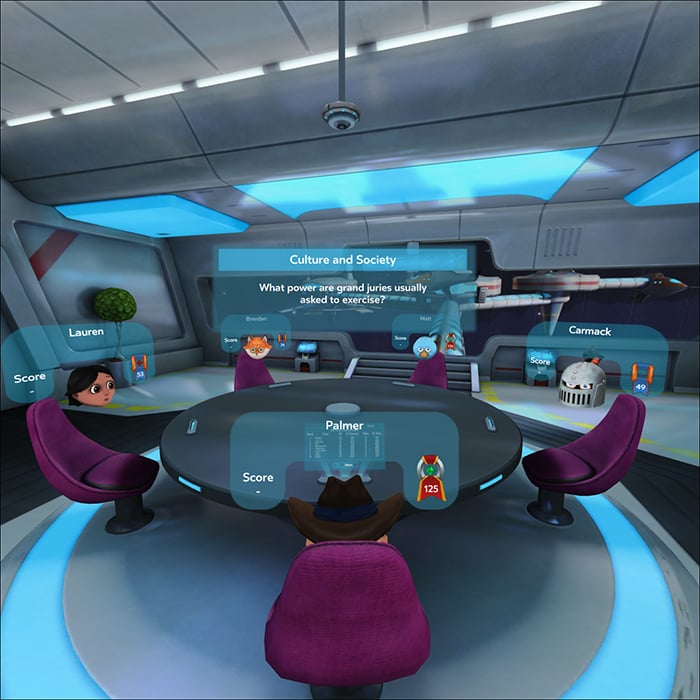 Phase two
Neither Samsung nor Oculus is sharing how many Gears have been sold since the device debuted in November, but early indications suggest its affordable $99 price tag is helping make it a hit with consumers. And soon, Gear owners will be able to do a lot more than immerse themselves in virtual games.

Oculus recently announced it's incorporating social media-like functionality into Gear, with Facebook's site itself likely not far behind. Gear users can now search and connect with fellow VR aficionados by simply creating a profile. New "social games" have also been added that allow Gear owners to create virtual "rooms" where they can visit with friends from around the world, and compete in a trivia game.

These early steps toward creating Zuckerberg's VR communication platform are certainly noteworthy. In a market expected to grow to as much as $30 billion in just four years, expanding beyond the gamer demographic will mean an opportunity to grow Gear, and ultimately Rift, even further than the already sky-high projections. And one additional feature Oculus announced offers an intriguing peek into Zuckerberg's long-term virtual reality plans.

Beginning this week, Samsung Gear fans will find a Facebook Videos tab to watch 360-degree content in virtual reality. Establishing a connection to Facebook's social media features is significant in and of itself, but Oculus hasn't stopped there. Gear is also able to connect Facebook accounts with Oculus video to personalize video feeds, "based on the pages and people you follow."

Soon, Gear users will be able to take their respective Facebook connections even further. In the next few weeks, VR fans will be able to "like" and share their favorite videos with Facebook friends, another big step in Zuckerberg's plans for making Oculus more than a gaming device.

Facebook is notorious for taking as much time as needed to test, and retest, most every new feature on its properties before rolling it out to the masses. Incorporating video across Facebook's primary site, monetizing Instagram, and adding a video-calling feature for Messenger's 800 million-plus monthly active users (MAUs) are just a few recent examples.

Clearly, Facebook and Oculus have been working to develop Gear into a communications platform for some time -- and almost certainly doing the same for the Rift as well.

Facebook's user engagement levels are the envy of most every social media site. Of its 1.59 billion MAUs, more than 1 billion access Facebook every day. Now imagine a healthy percentage of all those engaged users being able to converse and share with an unlimited number of friends -- regardless of where they reside in the world -- across a virtual table?

There's also the not-so-small matter of how Facebook generates revenue: advertising. Video spots are more expensive for marketers because: one, they generally cost more to produce; and two, Facebook is able to charge more for them because they work. Virtual reality will add an entirely new dimension to the advertising landscape,  and Facebook's early adoption of the technology, combined with a VR social media experience, will ratchet its ad revenue up even further.

The Gear is a mere four months old, and pre-ordered Rifts have yet to be delivered, but Facebook isn't waiting around to make Zuckerberg's early plans for VR a reality. That's great news for Facebook shareholders and VR fans, whether they're gamers or not.

Tim Brugger has no position in any stocks mentioned. The Motley Fool owns shares of and recommends Facebook. We Fools may not all hold the same opinions, but we all believe that considering a diverse range of insights makes us better investors. The Motley Fool has a disclosure policy.