Please ensure Javascript is enabled for purposes of website accessibility
Log In Help Join The Motley Fool
Free Article Join Over 1 Million Premium Members And Get More In-Depth Stock Guidance and Research
By Alex Dumortier, CFA - Mar 18, 2016 at 11:19AM

The "fear trade" in gold has been a winner; Bank of America ups its buyback authorization.

That's right: Gold, which had been left for dead, has recovered some of its luster and is currently the best-performing major asset in the world this year.

Little over a month ago, with gold at around $1,150, Goldman Sachs, arguably the most closely followed bank in the commodities markets, predicted that gold would fall to $1,100 within three months, and to $1,000 within a year. Instead, the price of the yellow metal has risen to close at $1,266.50 yesterday. 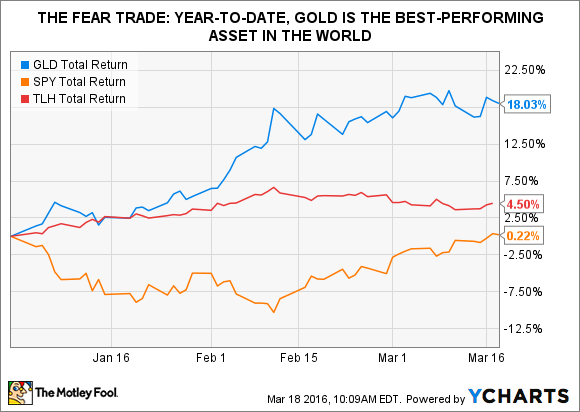 You'd be better off seeking reasonably priced productive assets that are a claim on a stream of cashflows than following the timorous into ultimate fiat currency.

Bank of America: Would you like cash back with those shares?
And speaking of reasonably priced assets, cashflows, and capital return, Bank of America Corp (NYSE: BAC) announced in a regulatory filing this morning that it had received the go-ahead from the Fed (or, in official terms, "the Federal Reserve did not object to...") to repurchase $800 million of shares. This is on top of the bank's existing $4.0 billion share repurchase authorization announced in March 2015.

This authorization is not related to the results of the annual Comprehensive Capital Analysis and Review (commonly known as the stress tests), which is administered by the Federal Reserve. Those results are due to be released this month, but today's announcement bodes well for Bank of America in that regard.

This Fool is looking for the Fed to authorize a substantial increase in B of A's dividend payout, which has been a long time coming. If that does occur, it would likely produce an upward rerating of the stock's price multiples. At 9.6 times the next 12 months' earnings-per-share estimate, B of A is not as attractive as it was in the first half of February, but it still looks like an attractive value.