Investors are starting to flock back toward growth stocks, and these companies could benefit.

Following the market's January plunge, investors seem to be warming back up to high-multiple stocks as their appetite for risk returns. All of the major indices recently hit 2016 highs as sentiment recovers. While 2016 could still prove to be quite volatile, here are some potential growth stock candidates to consider adding to your portfolio.

What you'll quickly note is that Ligand is a special breed of biotech stock. Instead of developing drugs in a laboratory, which is a process that often takes a decade or longer, it purchases royalty rights and then reaps single-digit percentage royalties from the sale of drugs that sport its patented technologies. Perhaps the most well-known of its technologies is Captisol, which is used to improve the solubility and stability of certain drugs. Ligand's strategy of partnering its patents at the earliest stage possible is a smart move that helps deflect its share of costs, and reduces risk.

After having just nine partnered therapeutics in 2008, Ligand now has a stake in more than 140 developing compounds using its technology, eight of which are now approved products. You might also be interested to know that Ligand's patents can be found in biosimilars, including a biosimilar to Humira, the best-selling drug in the world.

Even if a good chunk of Ligand's partnerships fail, it'll still reap substantive rewards if just a handful of approved products hit a home run. We've already witnessed Kyprolis, a multiple myeloma drug that received approval into second-line treatment this past summer, push past the $500 million annualized mark, while Cerenia, a motion sickness and antiemetic medicine for pets, has produced steady sales for years. Both products pay a royalty to Ligand.

If we see a steady expansion of Ligand's product portfolio, and drug developers keep their end of the bargain by successfully bringing new and innovative products to market, Ligand could deliver nearly $11 in EPS by 2019. That would be solid growth from the $3.37 it reported in full-year EPS in 2015.

George Budwell: Small-cap robotic surgery company TransEnterix (ASXC 1.80%) has my attention this month -- and apparently the market's as well, given the stock's explosive move to the upside only two weeks into March: 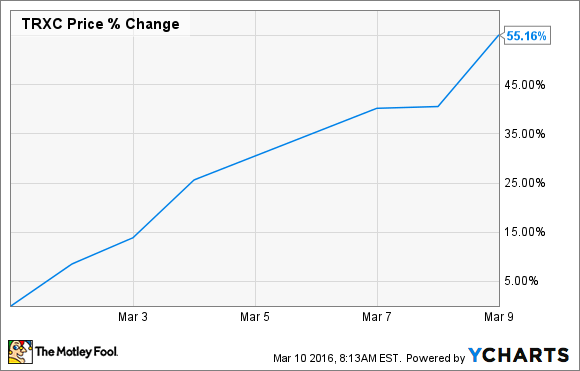 The long and short of TransEnterix's story is that the company is attempting to enter the ultra-high-growth robotic surgery market with two systems, namely ALF-X and SurgiBot. Both of these systems will reportedly compete against Intuitive Surgical's (ISRG 2.62%) blockbuster product known as the da vinci system.

Turning to the company's value proposition, TransEnterix's market cap presently stands at around $430 million, whereas the robotic surgery market as a whole is forecast to grow to an astounding $20 billion within the next four years. As such, this small-cap company wouldn't need to capture much of this vast market in order to generate tremendous returns on capital for investors.

Having said that, TransEnterix does come with a fairly substantial risk profile. At the end of the day, it's tough to launch high-tech medical devices of any sort. These types of products require a highly trained sales force and they rarely get off to a quick start in terms of overall sales for a number of reasons. That's not a great recipe for success for a tiny company like TransEnterix, as it implies years of dilutive financing ahead.

Given these hurdles to commercializing its product portfolio, my gut feeling (and that's all it is at this stage) is that management is most likely going to sell the company if the FDA green lights the SurgiBot system. After all, there are big players out there that have expressed significant interest in gaining a foothold in the robotic surgery market, and TransEnterix's product candidates could be game-changers in the right hands. Of course, the possibility of a sale is not a good reason to buy a stock.

Evan Niu, CFA: It's tough to buy stocks at their highs, but the last thing you want is for that feeling to keep you on the sidelines for too long. That's why I think Facebook (FB 1.83%) continues to look like a compelling buy, even as the company flirts with all-time highs. Shares are currently trading in the neighborhood of $110, just a stone's throw away from the peak of nearly $118 set last month following a strong fourth-quarter earnings release.

Fool co-founder David Gardner has a saying. Instead of the standard "buy low, sell high" that you always hear, David says to "buy high, never sell." The underlying idea is that a company whose shares are trading at highs has often earned that premium through strong execution of its business. If you wait too long for a pullback for an entry point, sometimes you can wait too long and keep missing out. There's another common investor axiom that could be relevant here, too: "The trend is your friend." Stocks pushing new highs will often continue to push new highs.

Facebook continues to execute incredibly well on mobile, and in many ways has a stronger positioning in mobile ads than even Alphabet (GOOG 4.16%)(GOOGL 4.20%). Facebook is rapidly chipping away at its lead with a strong portfolio of diverse apps, products, and services that all build its advertising business. eMarketer expects this trend to continue in the years ahead.

Steve Symington: On the surface, Zillow Group's (Z 7.33%)(ZG 7.01%) latest quarter may not have shown it, but I think the online real estate specialist boasts one of the most compelling growth stories our market has to offer.

For one, Zillow's pro forma fourth-quarter revenue -- which assumes its February 2015 acquisition of Trulia would have closed at the start of last year -- rose a modest 7% year over year, to $158.5 million. But that also included a decline from Market Leader, a real estate CRM software business Zillow owned as part of the acquisition, but chose to sell to Constellation Software this past September as it didn't fit with Zillow's broader business strategy. Excluding Market Leader, Zillow's fourth-quarter revenue would have climbed 18%.

More specifically, within Zillow's core marketplace segment was a 27% increase in real estate revenue, and 48% growth from mortgages revenue. But here again, that was held back by a 25% decline in the smaller display segment. For that, however, note in late 2014 Zillow began intentionally under-investing in its display business so it could allocate more resources toward the larger long-term growth opportunity its sees in the marketplace segment. And that's not to mention the fact Zillow has barely touched the tip of the iceberg in the rentals industry, which Zillow still considers an "emerging market" and rapidly exceeded Zillow's initial $10 million annual revenue run rate last year. Over the next several years, rentals revenue is expected to more than quadruple to match mortgages' 2015 ARR of $40 million.

Zooming out further, while Zillow anticipates pro forma revenue for all of 2016 to be in the range of $805 million to $815 million, or 26% growth over 2015 at the midpoint, that's still just a tiny piece of the estimated $12 billion real estate agents spend annually advertising their listings. In the end, as Zillow emerges from this period of transition, I think now is the perfect time for opportunistic investors to buy its shares.

Jason Hall: One of the most frustrating things to experience as an investor is when you see a company continue to strengthen itself and grow, while Mr. Market keeps looking the other way. That's been the case with natural gas for transportation company Clean Energy Fuels Corp (CLNE 5.50%) for more than a year now: 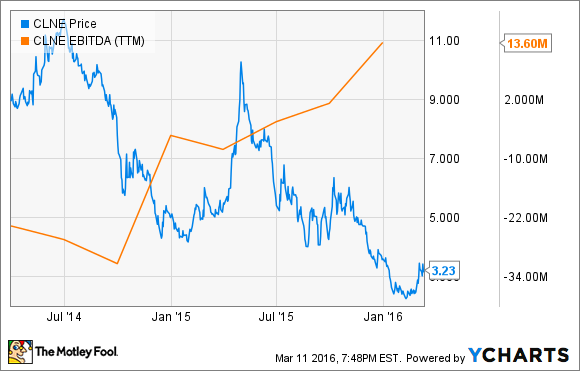 EBITDA -- or earnings before interest, taxes, depreciation, and amortization -- is far from a perfect measure of a company's performance, but it highlights something important with Clean Energy: The company is transitioning from a cash-burning business focused on spending to expand, into a profit-focused company taking advantage of the huge opportunity in front of it.

Clean Energy's business is selling natural gas for transportation, as well as building and supporting stations for its customers, and its own public stations. Since fuel prices can fluctuate significantly, revenue can be misleading. In 2015, total revenue declined 10%, but almost entirely due to a huge decline in natural gas prices. Gallons delivered for the year increased 16% to 308.5 million, as large vehicle fleet operators continued to switch from diesel and gasoline, due to the lower cost and emissions of natural gas, even with those fuels selling for half as much as the year before.

Finally, the target market for Clean Energy is primarily medium- and heavy-duty vehicles, which consume more than 35 billion gallons of fuel annually. Clean Energy could grow 10 times larger and still only be a fraction of that. Now's a great time to invest in the long-term potential.