Investing in retirement can be difficult. The time frame you might need money in is shorter than for younger investors, and that often means retirees are pushed into safer investments. But there can be pitfalls in "safe" stocks as well. Here are three well-known companies that may be riskier than they appear.

Procter & Gamble
When someone makes a list of safe dividend stocks, Procter & Gamble (NYSE:PG) usually makes the list. The company has been paying a dividend for 125 straight years, after all, so what could be safer?

But there are some disturbing trends within P&G that long-term investors looking for safety should worry about. Over the past decade, revenue and net income have been virtually flat, but management has still been pumping out bigger and bigger dividends. As you can see below, the company's payout ratio (dividends paid divided by what a company earns) has risen to nearly 100%. 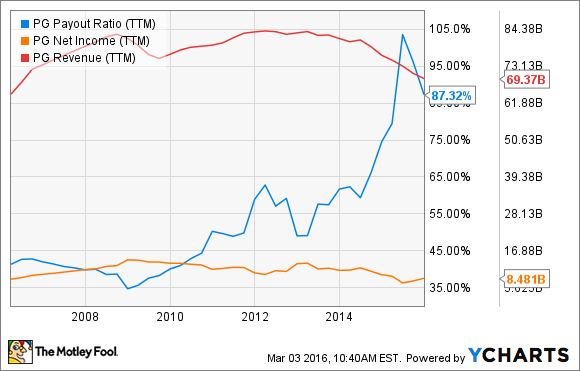 Continued growth in the dividend will require Procter & Gamble to either grow the business or take out debt to pay shareholders. The last decade has shown that growth may be harder than it seems for Procter & Gamble, as there are fewer new international markets to exploit and its competitors are stepping up their game. This stock may not be as safe as it appears.

Freeport-McMoRan
What could be safer than a company that pulls valuable and necessary materials like gold, silver, oil, and gas from the ground? The answer is: A lot of things.

Freeport-McMoRan (NYSE:FCX) has shown that there's a lot of risk in the commodities business, and most of that risk is tied to commodity prices. As a retiree, you can't predict when commodities are going to rise or fall, and probably don't have a long enough investing horizon to be able to play major commodity cycles. 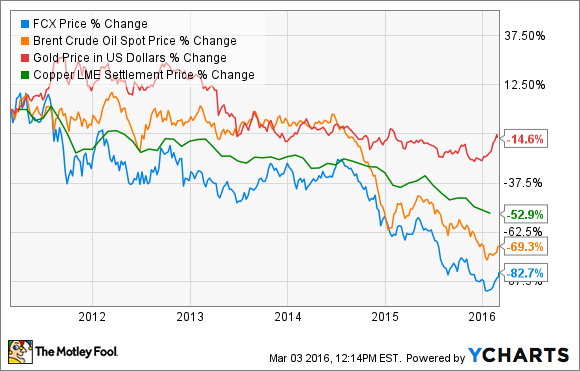 While owning things like gold or oil may sound like ways to preserve wealth in retirement, the truth is that they're not income generators, especially compared to rock-solid dividend stocks. And miners and explorers who search for these commodities are actually more leveraged to commodity prices than owners of the commodity itself. This dynamic makes a company like Freeport-McMoRan a terrible stock for retirees.

HP
Another one of those legacy companies that may be buried somewhere in your portfolio -- like P&G -- is HP (NYSE:HPQ). The company is one of the longest-running tech companies in America, and has a rich history in everything from PCs to data centers. But the HP of today is a lost tech giant.

You can see below that HP's overall business is in decline, both on the top and bottom lines, including massive writedowns a few years ago. 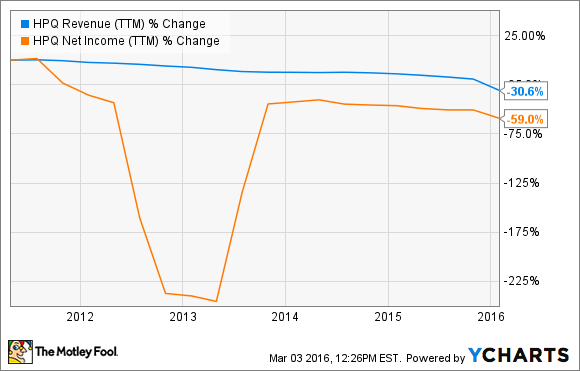 The broader challenge for someone in retirement who owns HP is that it doesn't seem to have a well-established position in the world of technology anymore. Printing, personal computing, enterprise services, and software sales were all down last year, and there doesn't seem to be anywhere HP is building a lead over the competition. HP may be an old name in tech, but that doesn't mean it's worth holding in your portfolio.

Stick to the basics
Investing during retirement should be about finding safe, predictable companies to own. P&G, Freeport McMoRan, and HP all have businesses that are either fundamentally flawed or are too volatile for a retirement portfolio, and they're worth reconsidering if you own them.