Global auto specialist BorgWarner (NYSE:BWA) has watched its shares suffer more than some of its industrial peers. But it's looking like 2016 will end up being a solid year for the company, even though other industrial companies expect to struggle. That sets the stage for a potential investment opportunity. Here are three reasons this auto specialist's stock could rise.

Emissions
One of the first and most important things to know about BorgWarner is that it works in the auto space, so the waxing and waning of auto demand will have a major impact on the company's results. However, that doesn't really give you a full picture of its business, because what BorgWarner makes are high-tech turbochargers and other emissions controlling & power-enhancing equipment for automobiles. 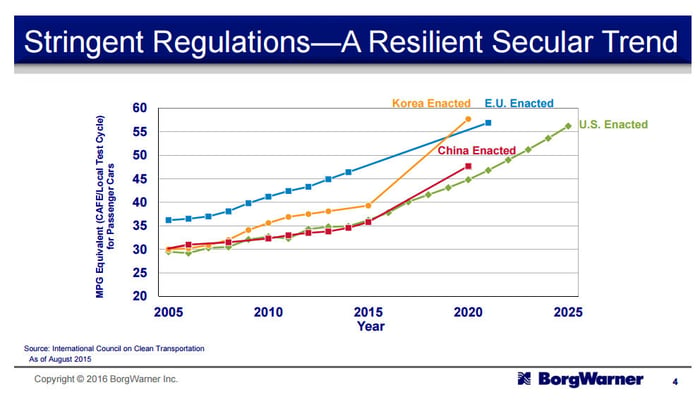 The world is getting more and more strict, in terms of emissions. Source: BorgWarner.

These little miracle workers allow engines to produce more power with less fuel, which in turns means less pollution. In other words, by partnering with BorgWarner, a car company can do some of the things it needs to increase gas mileage and reduce pollution. In a world increasingly concerned with global warming, this is a valuable niche. And it gives BorgWarner a long runway for growth, since the types of equipment it makes are likely to be increasingly in demand as more countries around the world implement more and more stringent pollution and mileage standards. This is the big-picture reason to expect BorgWarner's stock to rise.

Global exposure
The second reason for a long-term upturn is the company's global footprint. This is good in a couple of ways. For example, the Americas, which includes more than just the United States, is expected to make up around 35% of the company's business in 2016. Although there are some key mature markets here, like the United States, emissions regulations are getting more difficult to meet. That helps explain why BorgWarner expects the Americas to account for nearly 40% of its organic growth between 2016 and 2018.

Then there's Asia, which the company expects to account for about 30% of its 2016 business. This region is expected to make up almost 45% of its sales growth between 2016 and 2018. Asia is home to some of the fastest growing countries in the world, notably China, which is a key market for BorgWarner (14% of projected 2016 sales). As these nations move up the socioeconomic ladder, more and more cars will hit the road, which alone suggests increasing demand. Couple that fact with emissions standards getting tougher, and you get a double benefit.

The laggard is Europe, which accounts for the rest of its business and projected sales growth. Although that's probably because Europe's standards are higher at the moment, I wouldn't expect this trend to be long-lasting. Controlling emissions is a growing global issue, and once the rest of the world catches up, Europe will have no choice but to push higher again. And that will boost demand for BorgWarner gear.

Investors will notice, eventually
The next thing about BorgWarner is really investor-centric. Its stock is down around 45% from the highs reached in 2014, while industrial conglomerates such as Eaton Corp. (NYSE: ETN) and Emerson Electric (NYSE: EMR) are down roughly 25% or so. But here's the interesting thing: Eaton is projecting organic sales to fall between 2% and 4% in 2016. And Emerson thinks its organic sales could fall as much as 5%.

BorgWarner's sales did decline nearly 3.5% in 2015, so you can understand at least some of the investor pessimism surrounding the shares. But unlike Eaton or Emerson, BorgWarner expects its existing business to grow between 2.5% and 5.5% in 2016. And then there's an acquisition that was completed at the end of 2015 that should boost revenue growth up as high as 18%. In fact, the company is calling for earnings to advance as much as 20% in 2016, including the acquisition. Assuming BorgWarner puts up the numbers it expects, the market seems like it's far too pessimistic here. That's a discrepancy that that investors will eventually notice... and fix.

A little love
So the long-term picture for BorgWarner is serving a growing world that's increasingly concerned with the environment. That underpins the company's future and the reason investors should be looking at this industrial specialist. In the near term, however, perception is the big issue. But if BorgWarner can pull through on its sales and earnings goals, investors are likely to change their view of the company, causing BorgWarner stock to rise.