The closeout retailer is growing again but getting zero contribution from this important market segment.

Discount retailing giant Big Lots (BIG -0.34%) is enjoying a business rebound. Sales at existing stores have been rising for two years after 10 consecutive quarters of declines, and net income improved in 2015 following four years of decreases. Yes, its headline operating figures are not much better than they were five years ago, but at least they are moving in the right direction.

Still, the company remains far behind other national retailers in one critical growth segment: online retailing.

The digital difference
Last year, Big Lots' comparable-store sales, or comps, rose 1.8%, trailing Target (TGT 0.53%) and its 2.1% comps growth but edging out Wal-Mart (WMT 0.21%) and its 1% improvement. The key difference in those results, though, is that Big Lots' comps number includes zero contribution from the online selling channel.

Meanwhile, Wal-Mart and Target both leaned on digital revenue to generate a major portion of their growth. At Target, the contribution was especially pronounced: E-commerce was responsible for more than half of its 1.9% comps gain during the holiday quarter.

Both discount rivals are treating e-commerce as a must-win area. Target CEO Brian Cornell called it "critically important" that the company become a leader in the space, and Wal-Mart is spending heavily on building out its fulfillment infrastructure, adding expensive offerings like grocery delivery. The retail titan has warned investors that profit growth will be hurt in the short-term by such investments.

These companies are adapting to the steady shift away from traditional retail to the digital world. In just the past decade, e-commerce has seen its share of retail spending spike from 2.6% to 7.5% of the total: 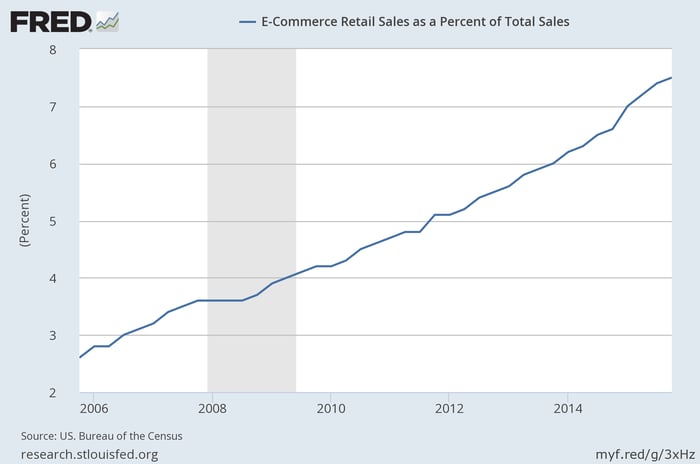 And if you think that number won't be much larger in a decade, just look at the recent example of Home Depot (HD -1.24%). The home improvement giant is pouring resources into e-commerce, and this year, it plans to offer delivery for bulky materials like concrete, mulch, and cinder blocks within a single business day. If Home Depot can find a way to make it profitable to sell such heavy, commoditized products online, then what is stopping traditional brick-and-mortar categories like Big Lots' prized furniture segment from eventually moving into online sales channels as well?

An opportunity, or a threat?
The good news for Big Lots shareholders is that the retailer is (finally) getting into the e-commerce game. The company just launched its website and is now taking orders on a small slice of its product offerings.

CEO David Campisi believes that despite years of planning, this will be a slow process that will take time to evolve. "I want to emphasize our mindset here is on crawl, walk, run as evidenced by our conservative, limited offering," he told investors in a recent conference call.

In fact, Campisi and his management team only expect to generate sales of about $20 million from the website this year, representing roughly zero percent of its $5.2 billion top line. In contrast, Target's digital business is at 3.4% of sales and growing quickly, while Home Depot's online sales passed $3 billion last year.

As those numbers suggest, Big Lots has plenty of work ahead of it to build a solid digital business from scratch. But at least many of its peers are demonstrating that it can be done.

Demitrios Kalogeropoulos owns shares of Home Depot. The Motley Fool recommends Big Lots and Home Depot. We Fools may not all hold the same opinions, but we all believe that considering a diverse range of insights makes us better investors. The Motley Fool has a disclosure policy.