Please ensure Javascript is enabled for purposes of website accessibility
Log In Help Join The Motley Fool
Free Article Join Over 1 Million Premium Members And Get More In-Depth Stock Guidance and Research
By Keith Speights - Mar 22, 2016 at 9:10AM

Among the largest drugmakers, there are some large dividend yields, but one stands out as most likely to pay off handsomely for investors down the road.

Big pharmaceutical firms have been a popular choice for dividend-seeking investors for a long time. Several pay out attractive and reliable dividends, and they throw in some opportunities for growth to boot. But which big pharma is the best dividend stock of all? Here's how they stack up.

Looking at the present
If you just look at dividend yield, two big pharma stocks immediately stand out. GlaxoSmithKline (NYSE: GSK) and AstraZeneca (NYSE: AZN) both lay claim to high yields that are nearly identical. 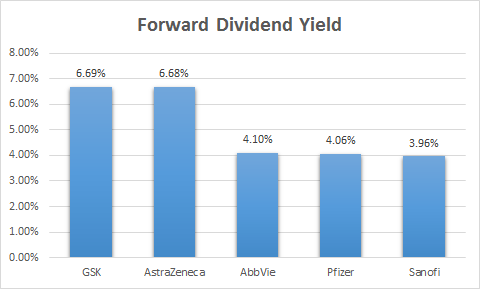 So should you just go with Glaxo -- or maybe flip a coin to decide between it and AstraZeneca? Not so fast. While both stocks come with tasty dividends now, that doesn't necessarily mean that they're the best bets. For example, what if GlaxoSmithKline slashes its dividend next year and AbbVie bumps its dividend a lot higher? That would change the picture altogether.

Looking at the future (and a little at the past)
Our challenge is that it's impossible to know for sure what will happen next year and beyond. It's tough enough to forecast what might happen this year. As physicist Niels Bohr once said, "Prediction is very difficult, especially about the future."

But if we can't predict the future with any certainty, there are still some things we can look at to give us a reasonably good sense of which big pharma dividends might be on solid ground, and which might be shaky. One key metric is the dividend payout ratio. 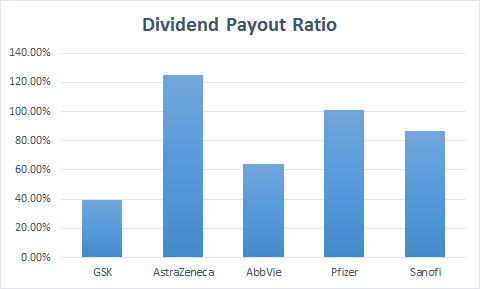 The dividend payout ratio is calculated by dividing a company's earnings by its dividend payment. A very high payout ratio could indicate a company liable to have trouble down the road with continuing to maintain its current dividend levels.

Based on the numbers, AstraZeneca and Pfizer will either have to generate higher earnings or reduce their payouts. Glaxo and AbbVie appear to be in pretty good shape to at least maintain dividends at current levels. Sanofi doesn't seem to be in immediate trouble, but its payout ratio is still pretty high.

There are a couple of problems with relying too much on dividend payout ratios, though. First, earnings numbers can be affected by one-time events that make a payout ratio look better or worse than the real story for the company. Glaxo, for example, generated significant additional revenue and earnings in 2015 from a major deal with Novartis, making its current payout ratio look more appealing than it would otherwise.

Second, they're based on past earnings, not on earnings that the company is likely to make in the future. To gain a better feel for the future earnings potential of these giant drugmakers, we need to look at their current products and their pipelines.

Glaxo experienced year-over-year sales declines in 2015 from its pharmaceuticals and vaccines. Slowing sales for Advair have hurt. On the other hand, the company is seeing strong growth from its HIV drugs Tivicay and Triumeq, and the Fluarix vaccine. Glaxo also counts around 40 drugs in its pipeline, with eight in late-stage clinical trials.

AstraZeneca also took a hit last year, with revenue dropping 7%. Declining sales of Crestor due to patent expiration present an especially big challenge for the company. AstraZeneca has a few bright spots: Sales of Brilinta, Bydureon, and Farxiga are growing briskly. Its pipeline includes over 30 treatments in late-stage clinical trials.

2015 turned out quite nicely for AbbVie, though. The company reported solid year-over-year revenue and earnings gains, powered by Humira, Creon, and newer drugs Imbruvica and Viekira. AbbVie has over 40 clinical studies in progress, 17 of which are in phase 3. The main hurdle for the company is that Humira faces the loss of U.S. patent protection at the end of 2016, and could eventually face competition from biosimilars.

Pfizer, on the other hand, saw revenue and earnings fall in 2015 compared to the prior year. Patent losses continue to weigh heavily. However, the company does have some rising stars -- most notably Xeljanz and the Prevnar family of vaccines. Pfizer also has a robust pipeline of 90 programs, including 38 in registration or late-stage trials.

It's a mixed picture for Sanofi. The French drugmaker reported higher year-over-year revenues in 2015, but lower earnings. Many of Sanofi's drugs continue to perform well, with multiple sclerosis treatments Aubagio and Lemtrada especially standing out. The company's pipeline holds lots of potential also, with 46 drugs and vaccines in clinical trials; 14 of those are in phase 3 or registration.

And the winner is...
So which big pharma is the best dividend stock? Let me first state which stocks aren't the best.

I'm leery of AstraZeneca's high dividend. The drugmaker is already paying out more in dividends than it makes on the bottom line. That can't continue indefinitely. I question whether AstraZeneca's pipeline will deliver quickly enough to avoid potential dividend cuts.

My take is that AbbVie, Pfizer, and Sanofi will likely keep their dividends flowing near current levels at least over the next few years. Despite challenges for all three companies, I like the potential for the drugs in their pipelines. However, although these three have great dividend yields, they're definitely in the second tier.

Glaxo has the highest dividend yield of them all. Although its low payout ratio is only a temporary result of the Novartis deal, I don't think the company's dividend is in any jeopardy. I don't expect tremendous earnings growth for Glaxo any time soon, but we're talking about income rather than growth. When all factors are considered, GlaxoSmithKline stands as the best big pharma dividend stock.