A serious collaboration between the tech giant and the luxury automaker recently looked likely. Now, it looks more like they're on opposite sides of an electric vehicle arms race.

For investors, the attempts by many of the tech industry's most powerful incumbents to disrupt the auto industry make for some exciting, and potentially lucrative, opportunities. For the auto industry, the barbarians are at the gate.

This understandable tension underscores much of the back-and-forth between the technology and automotive communities at the moment. Initially friendly and collaborative, relations between the two industries have turned increasingly adversarial as each develops its own self-driving cars.

BMW unveils now tech-heavy strategy
Earlier this month, BMW's new CEO, Harald Krueger, announced an important official shift in the company's strategy, one that clearly seeks to counter the looming competitive threats from the likes of Apple, Alphabet, and Tesla. Claiming, "We will lead the BMW Group into a new era," he said the company's plans now involve launching additional versions of its i-Series of electric vehicles, including a model dubbed iNEXT. 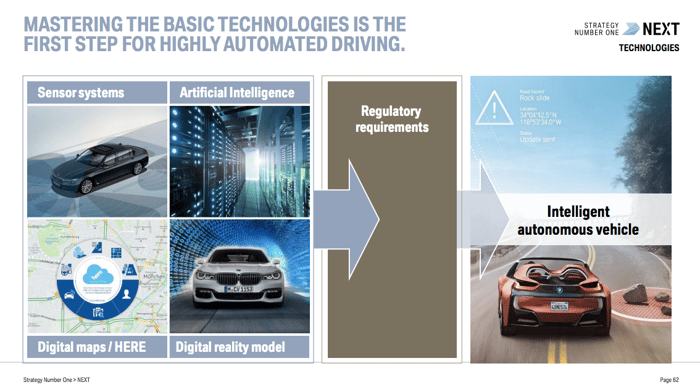 The iNEXT will feature BMW's forthcoming electric powertrain and lightweight body materials, and will feature an optional self-driving mode. The company will also place a greater emphasis on in-car software and services. Mobile software giants like Apple, Alphabet, and BlackBerry have each tried to consolidate market share in the budding market for smart-car software, but BMW remained largely mum on the topic in its strategy presentation.

BMW's iNEXT vehicles won't reach market for at least five years, which largely mirrors the product launch schedule at tech firms like Apple. This raises the possibility of a glut of electric, fully autonomous cars reaching market at roughly the same time: Google, for example, hopes to have its autonomous vehicles ready for market by then. Only Chinese search giant Baidu has an appreciably earlier target launch date for its autonomous driving project -- 2018 -- though its applications may be relatively limited early on.

Circling the wagons
BMW's moves could signal the end of its relationship with Apple, with whom the German auto giant has held meetings in the past. As recently as last July, Reuters reported that Apple and BMW had met to discuss potentially working together to realize their electric-vehicle ambitions. However, Reuters said, caution on BMW's part led to a cooling of sorts. BMW likely wishes to avoid simply becoming another parts supplier for Apple, a la Apple's infamous assembly partner Foxconn.

More broadly, this exemplifies the natural tension currently playing out between automakers and tech companies today. Though virtually everyone sees a massive economic opportunity in revolutionizing the transportation of people and goods around the world, the automotive and technology industries each, by and large, lack a core expertise the other possesses. Apple's software is used and beloved by hundreds of millions of people around the world, but at present, it lacks the requisite manufacturing skills to bring its Project Titan to market at scale. Conversely, BMW produces millions of cars annually, but lacks expertise in developing software and services.

Both industries are hard at work poaching talent from each other in an effort to cover their knowledge gaps, which has led to the arms-race scenario we see playing out in the headlines. So while BMW's more revolutionary EVs won't reach the market for at least five years, the company's recent moves speak to the broader continued race to shape the future of the auto industry.