Cupertino is still sprinting to big wins with iPhones and iPads, but Alphabet looks more ready for a multi-decade marathon.

Apple (AAPL -1.96%) is not only the world's largest company by market cap, but also a very popular holding for individual investors. Nearly 40% of Apple's shares are neither owned by insiders nor by financial institutions. Google parent Alphabet (GOOG -1.24%) (GOOGL -1.02%) is only slightly smaller, with a respectable 21% of the stock held in retirement accounts and other non-institutional portfolios.

These are some of the most popular investments on today's stock market. But which one is a better fit for your portfolio?

Not business as usual
Normally, I would start speaking in maths at this point. Compare and contrast growth rates, incoming cash flows, financial stability, all the good stuff that makes up a quality business worth investing in.

But that's kind of a moot point in this particular case. Both Apple and Alphabet can boast revenues and cash flows that would look appropriate for a mid-sized European country. If and when their business luck runs out, Alphabet and Apple will fall back on cash reserves of $73 billion and $216 billion, respectively. If you still insist on playing the numbers, a picture still says a thousand words: 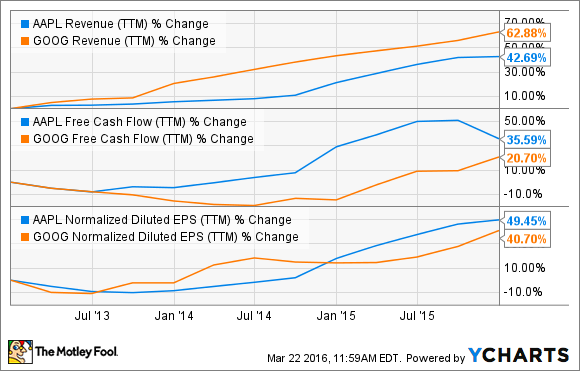 In short, both of these companies operate from fundamentally fantastic financial platforms. There are no deal-breakers here. In order to really separate Apple from Alphabet, we'll have to look at what makes these figures tick.

The numbers never tell the whole story
On the surface, we're still looking at two extremely similar companies. Alphabet is best known for its Google-branded online search and advertising services, with a sprinkling of loosely related side projects. Apple lives and dies by the iPhone and iPad product lines, with some help from Mac computers and iTunes services sprinkled in. A pair of one-trick ponies, though these simple tricks are mind-blowingly profitable.

But once you scratch below that surface, the differences start to emerge.

Google rebranded itself as Alphabet in order to explore new markets without spooking investors. Google clearly has no business looking into self-driving cars or advanced medical research, because these projects are miles away from the online core businesses. But these ideas can thrive under the Alphabet umbrella, while Google itself stays laser-focused on Internet services as just another piece of a larger puzzle. Think of Google as the insurance-focused core of Berkshire Hathaway (BRK.A 0.35%) (BRK.B 0.40%). Nobody complains that Dairy Queen, Norfolk Southern, and Fruit of the Loom are too different from Berkshire's insurance businesses, but the conglomerate would stop making sense if the fast food and underwear were sold under the GEICO banner.

Apple, on the other hand, really does focus as tightly as possible on what the company does best. From iPads to the Apple Watch and those increasingly old-school iPods, the company has built its fortunes on a single hardware/software platform. Take away the iOS collection, and Cupertino would be stuck promoting a Mac business that only accounts for 9% of total sales.

Apple did this to old-line Walkman players and then to simple feature phones; Google also joined the smartphone revolution after having forced nearly every rival search engine out of business. Meanwhile, Blackberry (BB 0.62%) was once synonymous with smartphone until iPhone and Android came along. Now, former Crackberry addicts have moved on to stronger mobile platforms. Blackberry shares have fallen more than 95% from their 2007 highs, and 87% in the last 5 years alone.Yes, I understand that running a diverse business comes with its own risks -- "diworsification" is more than just an empty insult. But it's also true that high-tech empires don't last forever. The next next big thing is always lurking just around the corner, threatening to turn all of our favorite markets upside down.

This could happen to Apple, too. The harder CEO Tim Cook doubles down on the only viable product platform at his disposal, the harder Apple will fall when the next mobile revolution starts. Don't think it won't.

And that's why Google was smart to take on the Alphabet moniker and go looking for new markets. This company is investing to get ready for the fall of Google. It's long-term planning of the extreme variety. It's the right way to plan for The Innovator's Dilemma. And I don't see Apple doing anything of that sort.

Final Foolish verdict
Alphabet is planning for the very long game while Apple is milking a relatively short-term win for all it's worth. Apple may be the bigger winner over the next couple of years, but Alphabet is the stock you can sew up in an old mattress and leave alone for decades to come.

Come back in 20 years and I'm sure that Alphabet will have become a very different but equally vibrant business.

I just can't say the same about Apple.

Suzanne Frey, an executive at Alphabet, is a member of The Motley Fool's board of directors. The Motley Fool owns shares of and recommends Alphabet (A and C shares), Apple, and Berkshire Hathaway.