Find out why this high-yield LNG Tanker MLP is badly mispriced by Wall Street, and how it can supercharge your portfolio in 2016.

Anytime a cyclical industry such as energy experiences a massive crash, Wall Street is prone to overreact and beat down both high- and low-quality energy stocks. This creates the potential for long-term dividend investors to realize market crushing total returns for the next five to 10 years. 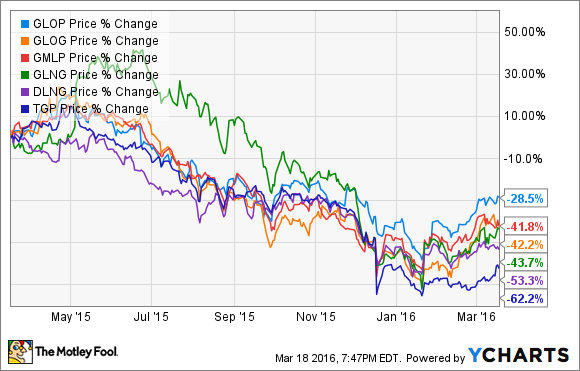 GasLog Partners has by far held up the best among its peers, and that's no accident. Let's take a look at why this high-yield MLP is suffering the least from the worst oil crash in 50 years, and, more importantly, see why it continues to make a potentially exceptional long-term income investment.

Last year's exceptional growth was a result of growing its fleet 60% via the acquisition of three additional LNG tankers from its sponsor, general partner, and manager GasLog LTD (NYSE: GLOG) .

What investors should especially pay attention to is the growth of GasLog Partners' coverage ratio, which is one of the best metrics for measuring the long-term sustainability of the MLP's generous distribution.

Not only did GasLog Partners' manage to grow both it coverage ratio during exceptionally challenging market conditions, but management has shown remarkable forethought in growing its coverage ratio over time. This despite impressive payout growth rate of 18% annually since its IPO. 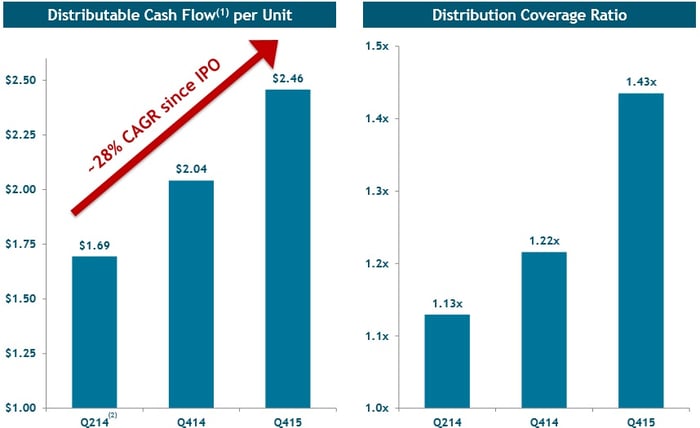 In fact, in the last quarter of 2015, GasLog Partners reported a record high DCR of 1.43, indicating not only that the current distribution is far more secure than the sky-high yield would suggest, but also that 2016's DCR is likely to increase even further. That's especially true given that management's current payout plans don't involve any short-term distribution growth.

Payout profile remains one of the strongest in the industry

High-yielding investments are often a sign of the market's lack of faith that a company can maintain the payout going forward. For example, Teekay LNG Partners, owing to large short-term financial obligations and a lack of access to cheap growth capital markets, was forced to slash its distribution by 80% to finance its upcoming liabilities with excess cash flow.

On the other hand, GasLog Partners' ability to retain a far larger amount of cash flow as a percentage of revenue puts it at a distinct advantage to both Dynagas and Teekay in terms of future growth potential. That's because LNG tankers are very complex and expensive to build and so MLPs in this industry require access to both cheap debt and low cost equity in order to allow them to pay out such generous distributions.

However, if investors become overly bearish on the industry, such as over the past year, then growing DCF per unit via new tanker acquisitions becomes extremely difficult. This can make long-term, sustainable distribution growth all but impossible.

Luckily, GasLog Partners has a way around this that's independent of energy prices and fickle Wall Street sentiment.

Putting excess DCF to work to prepare for future growth

A distribution that has to be slashed, as occurred last year with Teekay, can result in massive investor losses. This is why the sustainability of a payout should be the first priority of any dividend portfolio.

Thus the coverage ratio, while important, isn't the only thing to monitor closely. An MLP's debt load is also of paramount importance, because creditors or ratings agencies, under threat of a credit downgrade that will greatly increase borrowing costs, can force an MLP to greatly reduce its payout even if cash flows remain strong.

GasLog Partners' leverage ratio is the second highest of its peer group which is why investors should be excited to see GasLog Partners putting its excess DCF to good use in Q4. In its latest quarter the MLP , in combination with previously retained cash, paid off $30.6 million in debt. Half of that was on its revolving credit facility which represents the MLP's highest borrowing costs.

According to management the debt repayment actually improves DCF per unit, further increasing the security of the payout in 2016 and likely increasing GasLog Partners' excess cash flow margin.

This bodes well for GasLog Partners' future growth because the MLP and its sponsor just announced successful debt refinancing off all debt coming due before 2018.

Bottom line
GasLog Partners isn't likely to be able to grow its payout until its equity recovers enough to make further tanker acquisitions accretive. However, investors should have confidence in management's use of excess cash flow to pay down debt and prepare for strong growth once energy prices recover and cause its unit price to rise.