Alphabet's coming launch of a keyboard for Apple's iOS is pure genius.

You don't get to $300 billion without overcoming your fair share of problems. This truism certainly applies individually to tech titans Alphabet (GOOG 1.56%) (GOOGL 1.90%) and Apple (AAPL 1.37%) at different points in their respective corporate histories.

What's more, the two face entirely different problems today. However, in an interesting, if not unforeseen, development, it appears Alphabet plans to try to solve one of its most-pressing big-picture issues through none other than Apple itself.

Alphabet's upcoming iOS keyboard
According to a flurry of recent reports, Alphabet is currently developing a branded keyboard for Apple's iOS mobile devices. This news in and of itself isn't especially noteworthy, as a brief scan of Apple's App Store on my iPhone reveals what seems like well over 100 different third-party keyboards, with plenty of room to continue scrolling. However, Alphabet's keyboard would differ from Apple's standard iOS keyboard in a few important regards. 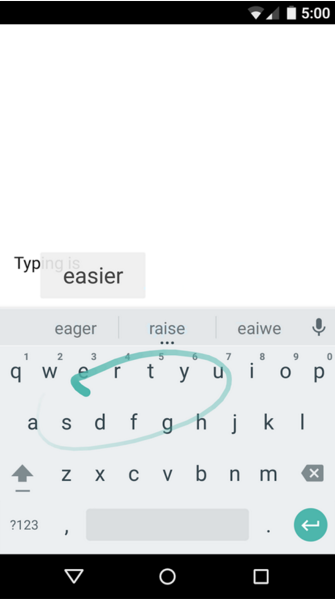 For starters, Alphabet's keyboard will allow gesture-based typing, which enables a user to slide his or her finger continuously from one letter to the next, instead of striking each individual key a la the default iOS keyboard. Far more importantly, Alphabet's forthcoming keyboard is also rumored to include a button that will launch a search function built directly into the keyboard. This will allow users to search for things like animated GIFs to include in their messages; but it will also enable web search queries to Alphabet's flagship Google search engine. This is a very clever move, indeed.

Sign of the times
In terms of its impact on Alphabet itself, we can hopefully all agree that the search-enabled keyboard should increase the overall volume of searches to Google, which still generates the bulk of its sales from advertisements shown next to search results. However, it also isn't clear whether integrating its search function into an iOS keyboard would violate Alphabet's search referral agreements with Apple, for which it purportedly pays the tech giant $1 billion annually. There's also a functionality concern to consider, as third-party keyboards, in my own personal GIF-sending experience, tend to be buggy, and somewhat slow to load.

However, the move likely stands to benefit Alphabet in a broader context. Messaging platforms, like Apple's iMessage, among many others, are taking on increased importance within the technology industry. Messaging networks like Facebook Messenger, its wholly owned subsidiary WhatsApp, or Tencent's WeChat, have each opened their services for third-party app developers in recent years. This has led to an explosion in the types and number of activities users can engage in inside their messaging platform of choice.

In Facebook Messenger alone, users can book Uber rides, check flight status updates, and interface with an increasing number of companies' customer service departments, all without leaving Messenger. In fact, some technophiles have enthusiastically claimed that messaging services like those listed above, or start-up unicorn Slack on the enterprise side, could one day serve a role similar to that of an operating system today.

With this trend likely to continue, Alphabet's move to develop a keyboard that can place its profit center search function into messaging apps only behooves the company over the long term. The company is, in many ways, simply skating where the puck is going, which is always good business in the frenetically paced world of technology.