Here is your risk of getting audited by the IRS by adjusted gross income.

If you dislike paying taxes, you'll hate getting audited. The time-consuming process makes many taxpayers sick with worry. Luckily, the odds of any individual taxpayer getting audited are quite low, particularly if your income isn't significantly higher or lower than the national average.

The IRS publishes an annual Data Book that shows how many returns were filed, and how many returns received additional scrutiny. With this information, we can roughly quantify your odds that the IRS audits your 2015 tax returns.

Odds of an IRS audit
The chart below shows the percentage of returns that were audited by range of adjusted gross incomes. Notice that low- and very high-income earners were the most affected by audits. Incomes most commonly associated with "middle-class" households received very little scrutiny, as fewer than 1 out of 100 were audited. 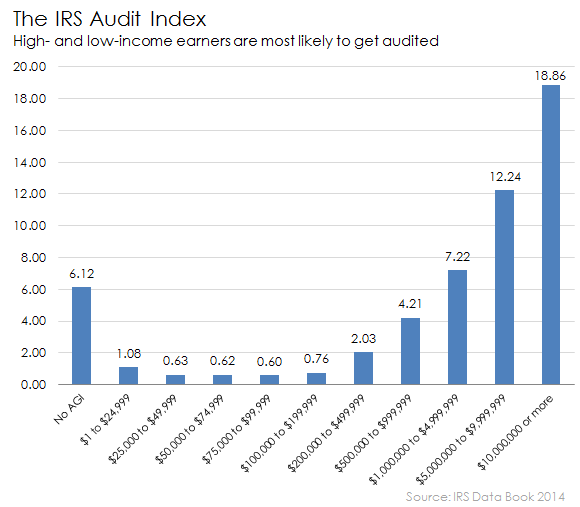 Meanwhile, high-income earners are obviously the most frequent target of the IRS. Those who earned more than $10 million in 2013 were nearly 19 times more likely than the average to get a second look from the IRS.

It makes some sense. Those who report having no income might be hiding some income from the IRS. Those who report a lot of income in any given year may have claimed credits they didn't qualify for, or failed to pay some taxes.

The main takeaway is that the IRS is a rational entity. An hour spent auditing someone who makes millions likely has a substantially better payoff than shaking down a plumber or middle school teacher. The average American has a very small chance of getting audited in any given year.

How to reduce your odds of getting audited
"Plain vanilla" tax filers have the lowest audit risks. In short, it's all about the simplicity of your returns. If your income comes on a W-2, you don't own a home, and file on a 1040EZ, your audit risks falls to basically zero.

Each deduction and tax credit creates extra complexity, and can increase the odds at getting audited. Most importantly, it increases the risk of simple math errors, which are flagged by the IRS.

Some common pitfalls are outsize charitable contributions as a percentage of your income, income reported on a Schedule C (typically small business owners), and deductions for mileage, which can be easily fudged for the benefit of the tax payer.

When it comes to tax credits, the Earned Income Tax Credit, First-time homebuyer credit repayment, and child tax credits, were the source of more than 557,000 simple math errors in 2013, according to the IRS. Double check these.

While some red flags are simply unavoidable -- you should claim any deduction or credit you qualify for, no matter how odd -- you can reduce the pain of an audit by keeping a good paper trail.

Most audits are done by correspondence, not by a field audit in which IRS agents come knocking on your door. Often, it's as simple as correcting a misplaced number or providing proof that you qualify for a tax credit. Those who keep good records should survive an audit with their sanity intact.