Please ensure Javascript is enabled for purposes of website accessibility
Log In Help Join The Motley Fool
Free Article Join Over 1 Million Premium Members And Get More In-Depth Stock Guidance and Research
By Beth McKenna – Mar 26, 2016 at 11:47AM

Investing in the snack-food giant behind such popular brands as Oreo, Cadbury, and Trident might be riskier than you think. 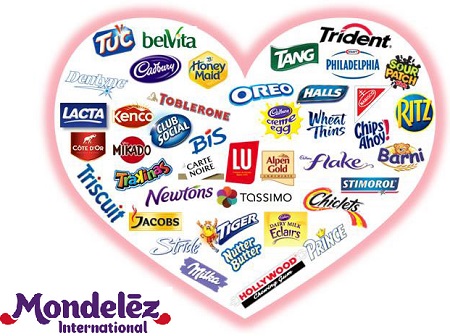 Shares of global snack-food giant Mondelez International (MDLZ 0.03%) have returned 15% over the one-year period through March 23, significantly outperforming the S&P 500, and competitors like chocolate giant Hershey (HSY 0.69%) and alternative dairy producer WhiteWave Foods (WWAV), which are both in the red about 9%. Mondelez's performance, however, falls short of that of cereal and convenience food maker Kellogg and J.M. Smucker (SJM 1.20%), which have returned about 21% and 16%, respectively, in the same period.

Mondelez's stock might seem like a safe bet since it's in the packaged-food industry, which is usually considered a conservative group, and because its brands include such heavyweights as Oreo, Cadbury, and Trident. But let's take a closer look to see how risky it might be.

Total return history
Mondelez was formerly the global snack business of Kraft Foods, before that company spun off its North American grocery business in October 2012 and renamed what was left. A one-year return history isn't nearly as telling as a longer-term one, so here's Mondelez's total return for its almost three and a half year trading history versus select peers and the S&P 500. 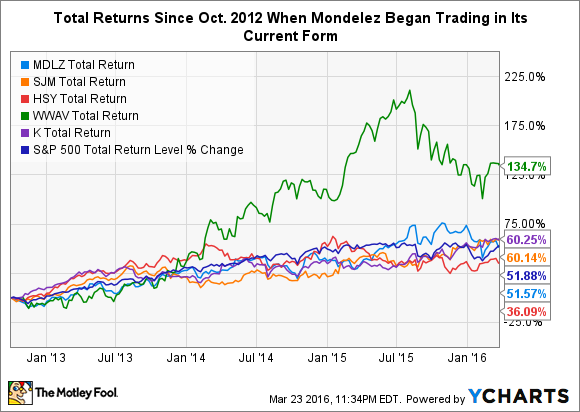 Mondelez's 52% return matches the S&P 500's return, but falls short of Smucker's and Kellogg's 60% returns. Hershey, which is the chocolate leader in North America, has been struggling even more than Mondelez, which is the global chocolate titan. Shares of WhiteWave Foods, best known for its flagship Silk brand of plant-based dairy-substitute products, have significantly outperformed the traditional packaged food stocks, despite a sizable pullback in 2015.

Let's dig into revenue and earnings growth to see if we can determine the reasons behind Mondelez's relative stock-price performance and gauge how risky the stock might be. 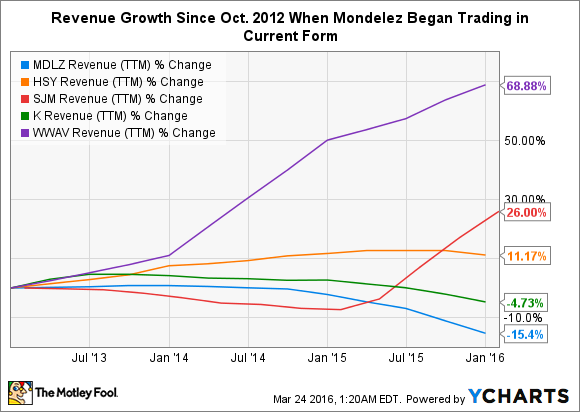 Mondelez's revenues have decreased more than 15% since it began trading as a snack-food pure play in October 2012. A big factor here is the strength of the U.S. dollar, which has hurt the reported revenue growth of U.S. companies that do a significant amount of international business. Mondelez's international business accounted for 76% of its total revenue in 2015. By contrast, companies like Smucker, which does business solely in North America, and Hershey, which sells primarily in North America, haven't experienced nearly the same currency impacts.

Currency headwinds aren't the only reason for Mondelez's poor showing on the revenue front. The company has been struggling to grow revenue in the developed markets of Europe and North America, experiencing difficulties that can largely be attributed to changing eating habits among consumers. These healthier eating trends, on the other hand, are helping WhiteWave, whose revenues are up due to both organic growth and acquisitions.

Smucker's big jump in revenue last year was due to the acquisition of Big Heart Pet Brands. It seems telling that Smucker, whose products are also largely filled with ingredients consumers are increasingly limiting or avoiding, such as high-fructose corn syrup, acquired a maker of foods for pets, rather than consumers. This could suggests that all is not well in the less-than-healthy consumer packaged food category.

Here's how Mondelez and its peers stack up on the normalized earnings growth front, which excludes one-time items that "artificially" inflate or deflate earnings: 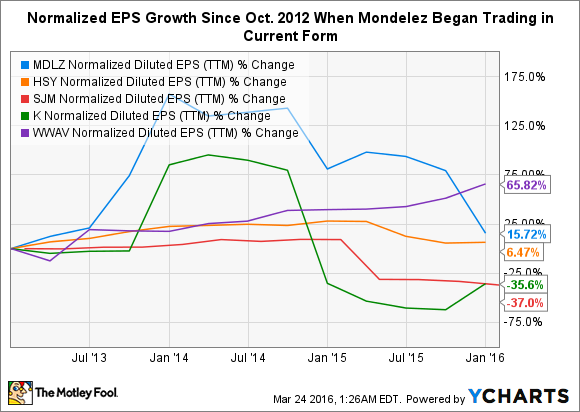 Mondelez's normalized earnings growth of nearly 16% during the period is modest. Nonetheless, it's solid, given that the company's revenues have contracted more than 15% during that time. Mondelez has managed this feat by increasing efficiencies  and cutting costs. However, these measures are not sustainable ways to grow earnings. Increasing revenue is the only sustainable way to increase earnings over the long term. The fact that Mondelez has been relying on cutting costs to grow earnings makes the stock more risky than it might seem. 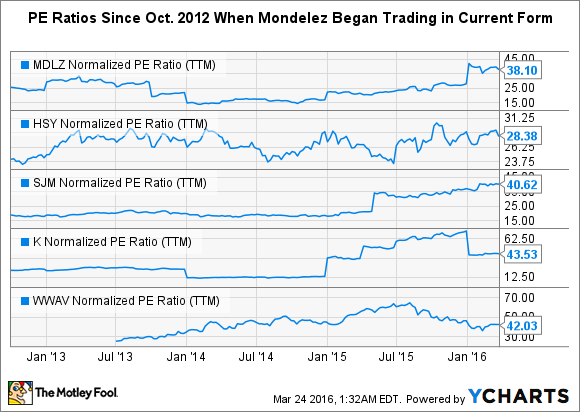 Mondelez's P/E ratio of 38 is high relative to its historic valuation. Its P/E, based on normalized earnings, hovered around 25 throughout 2015. The company's earnings growth does not justify a P/E of 38, in my opinion, especially since it's driven by cost-cutting, not revenue growth. Investors have flocked to more "defensive" stocks in 2016 due to the market's poor start to the year, which is a big reason the P/E ballooned. Nonetheless, it isn't justified by the company's fundamentals, so it's not surprising that Mondelez's stock has lost 10% of its value so far in 2016. It could have more room to drop.

Wrap-up
Mondelez's high valuation for contracting revenue and mediocre normalized earnings growth, driven by cost-cutting, makes it a riskier stock than it might seem. A significant reason for its struggles to grow revenue appears to be related to the type of food it sells. Investors should wait until Mondelez proves it can profitably grow its revenue before buying this stock, in my opinion.

Beth McKenna has no position in any stocks mentioned, though loves organic coconut-based dairy products. The Motley Fool owns shares of and recommends WhiteWave Foods. We Fools may not all hold the same opinions, but we all believe that considering a diverse range of insights makes us better investors. The Motley Fool has a disclosure policy.