Exact Sciences (EXAS -3.77%), maker of the noninvasive Cologuard colon cancer detection test, is very clearly a battleground stock. On one hand, Exact Sciences has a compelling growth story with a potentially game-changing detection tool. On the other hand, 26% of shares are sold short, according to data provided by S&P Global Market Intelligence, and Exact Sciences' share price has fallen more than 70% in the past 52 weeks. 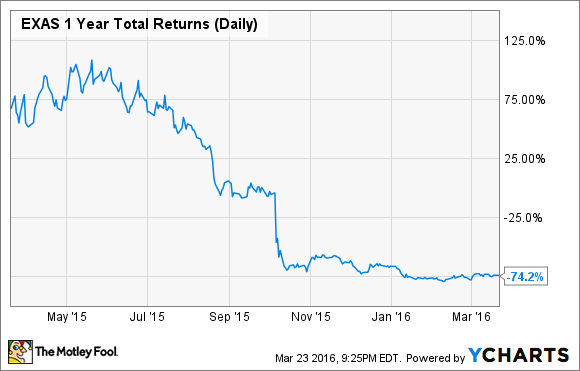 So, at current prices, is the stock a buy?

There are reasons to be bullish ...
Bulls argue that Cologuard is in the early stages of what could be a massive growth ramp-up. The colon cancer test has a 92% success rate in identifying colon cancer, and the test is popular, with 75% of patients in a study preferring it to a colonoscopy, and 84% of patients saying they would take another Cologuard test if it were recommended.

Management is guiding for 240,000 Cologuard tests to be administered this year -- more than twice the 104,000 kits completed in 2015. And remember, Cologuard is meant to be administered every three years, meaning that this would be recurring revenue. That's a powerful growth opportunity, and one that's reflected in Exact Sciences' peak sales estimates of $1 billion or so in annual revenue from Cologuard -- a great deal more than the $39.4 million Exact Sciences brought in last year or the $90 to $100 million management anticipates this year.

Cologuard's success will largely be determined by whether it ends up covered by insurers, and Exact Sciences got a big win with inclusion on Anthem's reimbursement list. Now management is working with Anthem in each of its 14 states to get in-network status on the company's branded Blue Cross-Blue Shield plans. As you can imagine, Exact Sciences is also working to get on a number of other insurer lists as quickly as possible.

And Exact Sciences' market cap is a hair over $600 million -- with its signature product potentially ramping up to $1 billion! In healthcare, that implies a stock that's pretty cheap, as  most healthcare companies trade at well over an equivalent to sales.

With a test that's popular, effective, and ramping up quickly, and a stock that looks really cheap, what's not to like?

Yet a whopping 26% of share float is sold short. So at least according to a lot of investors, there's plenty not to like.

It turns out they also have a point.

There are reasons to be bearish ...
Exact Sciences is burning through cash like nobody's business. Just last quarter, Exact Sciences burned through $36.6 million in cash, and it's unclear when cash burn will begin to moderate as the company hopefully achieves some scale. While the $306.9 million in cash and equivalents the company has on its balance sheet is a plus and should provide a fair amount of runway, expenses could continue rising because of the evolving commercial strategy around Cologuard. Management is even testing out TV ads -- talk about a big potential expense.

And Cologuard isn't as high-margin a product as healthcare investors are used to -- Exact Sciences' gross margin was only 38% in 2015, as compared with the 80%-plus gross margins usually seen in biotech. With a lower-margin product on their hands, management will have to have to work harder to attain profitability than with other healthcare companies, and with losses mounting, it'll be a tough hill to climb. Last year's net loss was $158 million, 2014's was $100 million, and 2013's was $46.5 million -- a pretty clear trend. In Exact Sciences' annual 10-K, management noted that "we expect that our losses will continue for at least the next several years." Not exactly a confidence-building commentary on the company's profitability.

The bears have a good point -- Exact Sciences doesn't look likely to become profitable anytime soon. But I believe the company has the potential to reshape the colon cancer detection market. With high patient satisfaction and a price point in between other colon cancer detection tests -- more expensive than the fecal immunochemical test, and less expensive than a colonoscopy -- Cologuard looks like a game-changer. I think that risk-tolerant investors should give the company a good, hard look before passing it up.

Michael Douglass has no position in any stocks mentioned. The Motley Fool recommends Anthem. Try any of our Foolish newsletter services free for 30 days. We Fools may not all hold the same opinions, but we all believe that considering a diverse range of insights makes us better investors. The Motley Fool has a disclosure policy.