Please ensure Javascript is enabled for purposes of website accessibility
Log In Help Join The Motley Fool
Free Article Join Over 1 Million Premium Members And Get More In-Depth Stock Guidance and Research
By Travis Hoium - Mar 26, 2016 at 9:45AM

The electricity business as we know it may be doomed.

There's an energy revolution happening in the U.S., and it may already be too late to stop it. Recent data from the U.S. Energy Information Administration shows that electricity consumption growth has slowed to a crawl over the past decade, while prices charged by utilities have been rising at a much faster rate.

This cost structure for the entrenched utility industry is being challenged by the growth of new energy options from rooftop solar to community solar that are taking demand off the grid. The more customers who get their energy from elsewhere, the more the grid's infrastructure costs must be spread among a smaller base of customers, the higher utility rates go, and the more attractive those alternatives to the grid become. It's a feedback loop that's at the heart of a downward spiral in the entrenched energy industry.

What the data shows
The chart below shows the overall electricity consumption in the U.S. (left axis) and the cost of that electricity (right axis). You can see that costs are rising much faster than consumption. 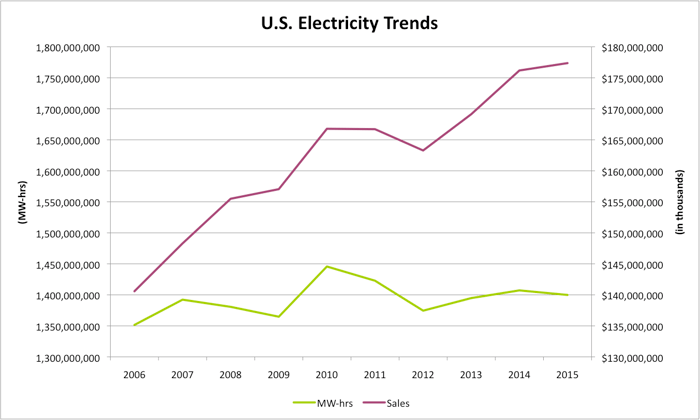 To put this data another way, total electricity sales rose 26.2% between 2006 and 2015, while electricity consumption rose just 3.6%. To be fair, that 2.6% compound growth rate in overall electricity costs is only slightly higher than the rate of inflation, so that growth rate isn't so shocking.

There are a number of factors leading to this rising-cost trend. New regulations make running old power-generation plants more expensive; aging infrastructure must be replaced; inflation has generally made running electric systems more expensive since that's what inflation does; and renewable energy mandates have raised utility's costs as well.

But before you blame renewable energy for rising costs, consider this: According to Lazard, wind is the lowest-cost source of new electric power in the U.S. today, and solar isn't far behind. Both are lowering costs rapidly, making them highly competitive even with lower cost fossil fuels. In many ways, renewable energy is now making it cheaper to provide power to the grid.

The world of unintended consequences
If these cost dynamics happened within the monopoly utility model, it wouldn't be a problem for the electric industry. What's changed in the last decade is that customers now have more options than buying from those utilities. So, rising costs are now a problem for utilities.

Companies like SolarCity (SCTY.DL) and SunPower (SPWR -0.41%) are selling energy to homeowners at better rates than the utilities through power purchase agreements. And some homeowners are choosing to buy their solar power systems to save even more money.

If costs for electricity rise far enough, home energy storage systems will become a viable option for consumers. That's why Tesla Motors (TSLA 0.13%) rolled out its Powerwall, a 6.4 kWh battery for homes and businesses that's ideal for storing solar power, and why customers in some markets are starting to look at it seriously. We're seeing a growing trend for storage in homes take shape in Hawaii, where electricity rates can exceed $0.30 per kWh and utilities recently pushed through a change to net metering that only pays homeowners about half of that rate for electricity they export to the grid. With that wide a gap between rates they must pay and the rates at which they can sell, why not just store the energy created during the day and use it at night?

Add it all up, and the entrenched energy industry may no longer be as stable as it's been for the last century.

This could happen in oil, too
What could be even more disruptive in the energy industry is both rising costs and increasing innovation in transportation leading to a paradigm shift there. If you look beyond oil prices today, it's becoming more costly long-term to extract a barrel of oil from the ground. Meanwhile, battery and fuel cell costs are coming down rapidly, creating the first viable competition for the combustion engine in a century.

Unless those trends reverse course, we could see a further shift to new technologies in transportation. In fact, that trend may have already begun, if Tesla's success and the number of rival EVs coming to market are any indication.

Don't be on the wrong side of the energy future
Energy stocks have been as close as investors could get to a "sure thing" for decades. Utilities had monopolies with guaranteed returns, and oil and gas companies could be assured of steadily increasing demand for their scarce resources.

But the past few years have demonstrated a shift in the direction our energy future is heading. Wind, solar, energy storage, hydrogen, and other technologies are starting to make major inroads, and they're all cutting costs for consumers rapidly. That changes where energy investments are headed, and you don't want to be on the wrong side of the industry's trends. Just ask a coal investor how that works out.