Please ensure Javascript is enabled for purposes of website accessibility
Log In Help Join The Motley Fool
Free Article Join Over 1 Million Premium Members And Get More In-Depth Stock Guidance and Research
By Jeremy Bowman – Mar 26, 2016 at 11:43AM

Bucking the conventional wisdom, there's been a surprising winner in the food industry over the past year.

Plenty of ink has been spilled on the massive shift happening in the food industry. Organic and natural food is taking over as Americans become more concerned about what they put into their bodies.

Major fast-food chains have made commitments to antibiotic-free chicken and cage-free eggs, and the number of food-makers that have pledged to label foods with GMOs increased this week after tiny Vermont passed a GMO-labeling law.

But while it's clear that the way we eat is changing, the reaction in the stock market is not what you might expect. The chart below shows the performance of three of the major players in the organic movement over the last year. 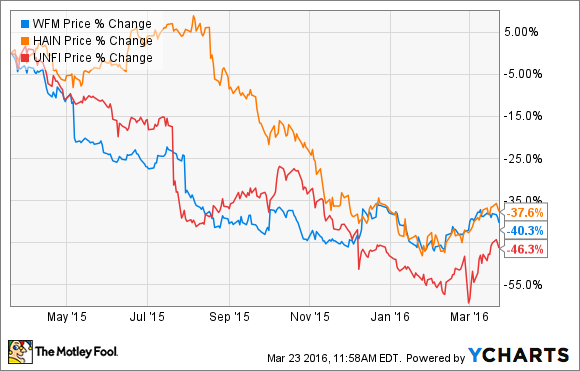 As you can see, all three have performed horribly over the past year. Facing rising competition, Whole Foods Market (WFM) saw its comparable sales decline in its most recent quarter, pushing profits down as well. Hain Celestial (HAIN 1.32%) and United Natural Foods (UNFI -0.11%) both count Whole Foods as their biggest customer, and unsurprisingly, those have posted slowdowns in sales and profits on Whole Foods' weakness and as competition has intensified in the sector.

Meanwhile, so-called big food stocks have easily bested the 3% drop in the S&P 500. 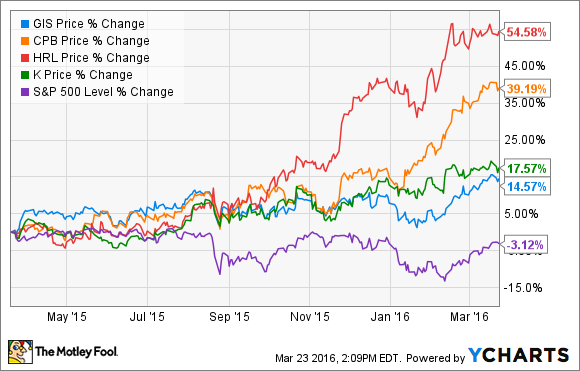 While many of these companies, like General Mills (GIS 0.23%), Kellogg (K 0.40%), and Campbell Soup Company (CPB 0.95%), are struggling to adapt to the shifts in the food business, their stocks have been thriving.

In General Mills' earnings report this week, sales fell 8% and adjusted earnings per share dropped to $0.65 from $0.70 a year ago, though that was better than expectations. Still, shares are trading near an all-time high. The same is true for rival Kellogg, which is also near an all-time high despite flat growth. The pattern is similar across the industry. While there's no clear reason that these stocks are rising together, here are a number of possibilities to explain their surprising performance.

Flight to safety
The market has been rocky since last August's crash. Analysts have projected a recession, and even after the recent recovery, stocks are down over the past year. In markets like this, investors tend to rush into defensive dividend stocks like this group of food-makers. These are all generations-old companies with multinational brands, and their stocks have been consistent winners over the years. They are the types of companies that will make money in good times and bad, so it's unsurprising that these stocks would get pumped up in the current market environment.

Managing the transition well
While you may expect organic specialists like Whole Foods to have the advantage with the current food trends, legacy food-makers aren't out in the cold as they have the cash flow to snatch up upstart organic brands. In recent years, General Mills has acquired Annie's, the maker of bunny-shaped mac and cheese; Campbell has taken over Bolthouse Farms; and Hormel Foods (HRL 0.53%) acquired Applegate Farms, which makes organic deli products. Despite their best-known brands, these companies have a stake in the organic movement and are looking to grow it.

General Mills has also taken significant steps to trim costs in order to boost profitability. Adjusted EPS at the Cheerios-maker are up 10% this year even with sliding sales. Its peers have made similar moves, helping to maintain small but steady profit growth. Additionally, these companies have also consistently met or exceeded earnings estimates over the past year.

What happens now?
Big food stocks' gains over the past year owe more to multiple expansion than growing profits. As a result, the stocks are all more expensive than they were a year ago. Of the brands listed above, all have P/E ratios of 25 or higher, a valuation above the S&P 500's and one that usually warrants considerable growth ahead.

Ultimately, the stocks can't keep growing without profits following. Cutting costs has proven to be a savvy strategy, but only so much can be cut without affecting the overall business. Eventually, these companies will need to find a way to drive sales growth, either through acquisitions or by reinvigorating old brands as General Mills did when it switched to natural colors in Trix and other cereals.

Without an increase in sales, these stocks are only becoming riskier as they move higher.