Please ensure Javascript is enabled for purposes of website accessibility
Log In Help Join The Motley Fool
Free Article Join Over 1 Million Premium Members And Get More In-Depth Stock Guidance and Research
By Reuben Gregg Brewer - Mar 27, 2016 at 11:35AM

If you're in your 70s, you're probably looking for a mix of safety and income; this trio should be right up your alley.

As we get older, our financial needs change. When we're younger, growth is important. But as we leave the workforce and start to live off our nest eggs, safety and income start to take center stage. That's where Southern Company (SO 0.91%), Duke Energy (DUK 1.13%), and Emerson Electric (EMR -1.21%) come in. If you're in your 70s, these companies are the types of names you might want to buy.

Boring old power
Southern is an electric utility based largely in the Southeast, serving some 4.4 million customers across Alabama, Florida, Georgia, and Mississippi. Roughly 90% of its revenues are generated from regulated utility businesses. That's important, because electric utilities are granted monopolies but have to get their rates, and thus profits, approved by the government.

Utilities generally get rate increases as they invest more in their businesses for things like power generation and transmission. The government puts a cap on the upside, but usually this arrangement tends to lead to very stable results over time. Southern has generally constructive relationships with its regulators, which helps, too.

In the end, Southern is a pretty boring company. However, there are a couple of interesting things going on. First, over the past couple of years, its growth projects have been a trouble spot. Cost overruns and delays have cost investors money and resulted in bad press. But that's helped to dampen investor demand for the shares and resulted in a nearly 4.4% yield. The projects appear to be on sounder footing now, and once they're complete, Southern will have a well-balanced, generating portfolio that can shift toward the lowest-cost fuel source. That helps keep customer costs down -- which keeps customers and the regulators that control its rates happy.

Southern is also in the process of buying a natural gas utility, AGL Resources (NYSE: GAS). That will further diversify Southern's business, but it won't change the regulated aspect since AGL's revenues are nearly 80% regulated. The big change? Southern's customer base will roughly double. The acquisition still has to pass regulatory muster, but it should enhance Southern as an investment option for those seeking steady income and capital preservation.

Getting more and more boring
Then there's Duke Energy, another of the nation's largest utilities. Duke serves 7.4 million customers across Ohio, Indiana, Kentucky, North Carolina, South Carolina, and Florida. Here's the thing: In 2012 or so, regulated operations made up about two-thirds of Duke's business. After a notable merger and asset sales, that number today is around 90%. So Duke has been on a quest to become more boring. 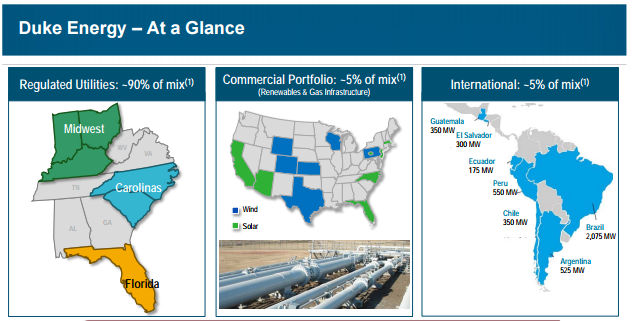 But it isn't done just yet. For example, the other two businesses it runs are an independent power producer and an international power business. On the independent power side, Duke has been selling older, fossil fuel-based power plants and investing in in-demand clean energy power, like solar. Clean power assets are able to get long-term contracts that make selling power on the open market less risky. On the international side of things, well, Duke has said it wants to sell that business so it can focus on its U.S. footprint. In other words, it wants to jettison a risky segment.

And, like Southern, Duke is in the midst of acquiring a gas company. In this case, it's Piedmont Natural Gas (PNY), with about 90% of its revenues coming from regulated businesses. Like Southern, Duke buying Piedmont will provide diversification, add to the regulated business, and likely make Duke increasingly boring. But if you like collecting an around 4.2% yield from a steady Eddy, boring is good!

A flyer, for the more adventurous
Two utilities sound about right as a foundation for a portfolio built to provide income and capital security. But you can't live on utilities alone, which is why you might want to take a look at Emerson Electric. It's a name you've probably heard of, and just for reference, it can trace its roots back to 1890, when Grover Cleveland was president.

But what makes Emerson interesting today is that it yields around 3.7% and its shares are off some 25% from recent highs. There's good reason for this, Emerson's organic sales fell about 2% last year and it's calling for organic sales to drop by as much as 5% this year. That doesn't sound like a good thing and it isn't. But, even during a tough stretch, which with over 100 years of life behind it Emerson has seen before, the global industrial giant turned a handy profit. 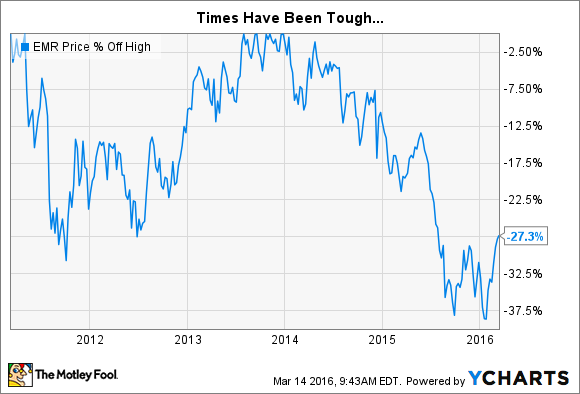 Emerson's bottom line was $3.99 a share in fiscal 2015. That was up from $3.03 the prior year. How did it do that, by controlling the things it could control. For example, streamlining its business to reduce costs. No wonder it was able to increase its dividend, again -- it has a nearly 60 year streak of annual hikes under its belt. Southern's tally is "only" 15 years and Duke comes in with 11.

So Emerson might be living through a tough patch, but that 3.7% yield is backed by a company that appears pretty committed to regular dividend hikes. Then there's the not so subtle fact that Emerson's annualized dividend growth over the past five years has been about 9%; Southern's dividend has grown an annualized 3.5% or so over that span with Duke pulling up the rear at about 2%. So while Emerson may not be as boring as a utility, that doesn't mean it shouldn't be on your watch list right now if you want to ensure your dividend income keeps up with inflation (historically around 3%).

Now you might be wondering about safeguarding your nest egg? That's where Emerson's widely diversified business comes in. Emerson is in the process of slimming down to focus on automation, commercial, and residential solutions. But within these categories are hundreds of productions. Having such a varied portfolio is why, even during a downturn, Emerson is able to put up big earnings. And once it has spun off and sold the assets it no longer wants, like network power and motors and drives, it's going to go into acquisition mode to build up the core that's left.

So growth should tick up again sometime in the next year, if everything goes according to plan. And remember that this isn't the first makeover Emerson has lived through and after a century of history, and it probably won't be the last. But before the clouds clear is a good time to consider taking a position in the still profitable company, to add a little growth to your overall portfolio just in case you live to 100, too.

The eye of the beholder
Clearly, the desirability of a stock is in the eye of the beholder. If you're in your 70s, Southern, Duke, and Emerson Electric are three stocks you might want to buy. They provide a mix of dividend income and safety. The two utilities and their regulated businesses are the more boring, but Emerson shines when you consider it in the proper historical context.