If the U.S. dollar weakens, the global economy strengthens, and the company increases its productivity, there's probably little stopping 3M's business from thriving and its stock from crushing the market.

Generally speaking, 3M (MMM 1.50%) has crushed the S&P 500 over most multiyear periods. Including reinvested dividends -- which 3M has increased each of the last 57 years -- the stock's return has been nothing short of stellar over the last decade. 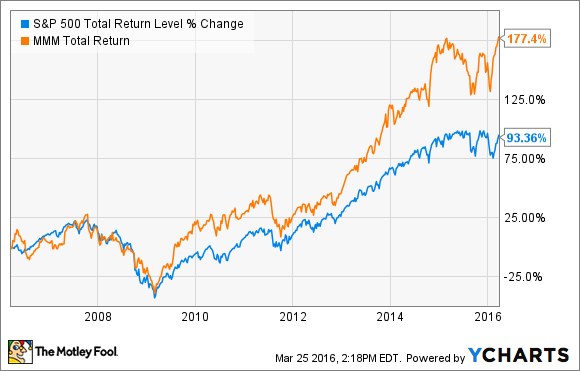 In more recent years, the $100 billion conglomerate has been buying back stock, reducing its shares outstanding, and driving earnings growth in an environment that's lacked meaningful sales growth. 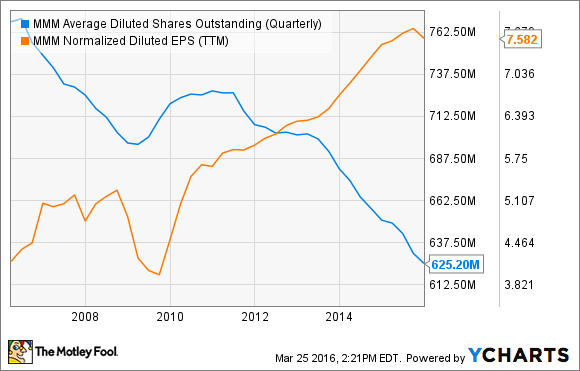 If 3M has been finding ways to drive longer-term shareholder returns in a difficult environment, it's exciting to imagine what the company could do in a more favorable climate. The following three areas have the potential to positively impact 3M's business -- and drive its stock higher.

The U.S. dollar weakens
A strengthening U.S. dollar has proven to be a sales headwind for 3M, which conducts about 60% of its business overseas. When the dollar is strong, other currencies generally become weaker and translate to fewer dollars. This reduced 3M's fourth-quarter revenue by 5.8% -- or $448 million -- year over year.

Had the dollar remained constant between periods, 3M would've likely shown stronger earnings growth, anywhere from 6% to 31%, depending on what expenses besides income taxes were incurred due to the increase in revenue. For full-year 2015, currency headwinds reduced sales by 6.8% year over year, or almost $2.2 billion. That's real money.

Not only would a weakening dollar likely boost 3M's top- and bottom-line results if its business remained stable, but it could also make the company's goods and services more competitive in the international marketplace. In other words, a falling dollar also has the potential to drive incremental improvements in its business prospects.

The global economy improves
Between collapsing oil prices and the negative impact it's had on resource-rich economies, a sluggish Europe, softening China, and low-growth U.S., the world economy has seen better days. Overall, 3M conducts business in more than 70 countries around the world, meaning an uptick in activity would almost certainly brighten its growth prospects.

To be fair, management isn't banking on a global resurgence in the near term. But eventually, the global economy will likely improve, which could position long-term investors to benefit.

3M's restructuring and transformation plans start bearing fruit
Along with 3M's third-quarter earnings released in October, management announced a restructuring plan that reduces its workforce by about 1.7%, which it expects will result in a pre-tax savings of $130 million in 2016. These restructuring efforts are aimed at making the company more agile and focused in a challenging global growth environment.

Additionally, as part of a longer-term effort, 3M is working to transform its operations so that it's easier to serve its customers. The core of this strategy relies on implementing a new enterprise resource planning system that better integrates and automates the many processes it uses to work with customers. By 2020, management expects this implementation will save the company between $500 million and $700 million a year and reduce its required working capital by another $500 million.

Putting it all together
Throughout its rich history, 3M has demonstrated that it can adapt to changing circumstances and operate in challenging environments in ways that still favor shareholders. After all, 3M's stock has outperformed the S&P 500 by around 800 percentage points since the mid-1980s.

While adaptability is certainly a desirable hallmark of an enduring business, the current strong dollar and low-growth environment is preventing 3M from firing on all cylinders. Now, if the U.S. dollar weakens, global economy strengthens, and the company increases its productivity, there's probably little stopping 3M's business from thriving and its stock from crushing the market.