Whether you like high growth or generous capital returns, these two businesses could find a place in any portfolio.

Almost three years ago, I decided to pit two of my favorite consumer-goods stocks against one another to see which was the better buy. On one hand was Nike (NKE -0.32%), a juggernaut in the sportswear and athletic footwear space. And on the other, Under Armour (UAA -0.08%), an up-and-coming competitor whose CEO, Kevin Plank, has long held Nike's dominant swoosh in his sights.

I ultimately chose Under Armour at the time, largely given its superior growth and as it showed early promise in translating its success in athletic apparel to its burgeoning footwear segment -- a multibillion-dollar business Nike still dominates to this day on a global scale.

That turned out to be a good choice; though shares of both Nike and Under Armour outpaced the broader market's more than 30% return since then, Under Armour has jumped more than 160% over the past three years, handily beating Nike's 102% return including dividends: 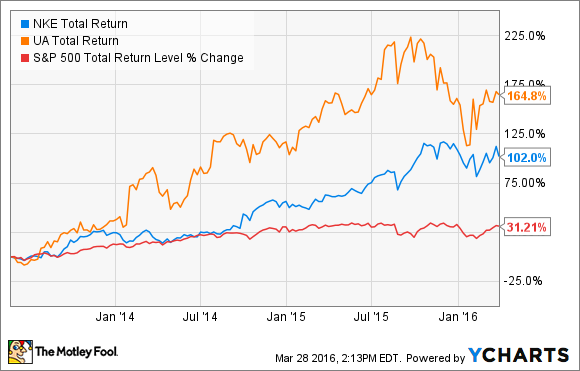 But that raises the question: Which is the better buy today? Let's dig in to see what's changed, and how Nike and Under Armour can serve investors looking to put money to work in 2016.

(Still) the underdog
First, it's worth noting Under Armour has maintained its edge even after a big pullback from all-time highs late last year -- and this despite Under Armour'x unveiling an ambitious plan in October to nearly double annual revenue to $7.5 billion by 2018, up from its previous long-term goal for maintaining compound annual growth of 20%.

But Under Armour is arguably priced to reflect that growth. Shares currently trade at 79 times trailing 12-month earnings, and nearly 50 times next year's expected earnings. However, longtime Under Armour investors also know it's rare to see the stock look cheap based on historical metrics. The stock has achieved its stupendous gains even as it sported a lofty average P/E ratio of roughly 65 over the past five years. And today, the metric is made all the more irrelevant as Under Armour management consciously foregoes bottom-line profits in favor of investing heavily to take market share, expand internationally, and ultimately achieve its top-line goals.

And its tactics appear to be working. Last quarter, for example, revenue growth accelerated to 31% (33% at constant currency), for total sales of $1.17 billion, notably including 22% growth from its core apparel business, to $865 million, a 95% increase in footwear sales, to $167 million, and a 25% increase in high-margin direct-to-consumer revenue, which represented 36% of total sales. International revenue also climbed 70% year over year (85% at constant currency), but still only represented 12% of total sales.

What's more, Under Armour has made heavy bets in the Connected Fitness space, including a smart shoe, smart scale, and even an innovative pair of heart-rate-measuring ear buds. That's not to mention the fact Under Armour spent hundreds of millions of dollars acquiring leading fitness app makers, through which it gained a wealth of valuable consumer information in the world's largest connected fitness community ending last year at almost 160 million registered users.

Let it suffice to say, then, that Under Armour has arguably never been stronger. But investors need to know they're paying a premium for that strength.

The global leader
That's not to say Nike can't stave off its smaller, faster-growing peer. In fact, Nike CEO Mark Parker regularly reminds investors during each call that "Nike is a growth company," and even unveiled the company's own target this past October to achieve $50 billion in revenue by the end of fiscal 2020 -- up 63% from last fiscal year's revenue of $30.6 billion.

Shortly afterward in November, Nike investors cheered when the company increased its quarterly dividend for the by 14% to $0.16 per share, revealed a now-implemented 2-for-1 stock split, and approved a new four-year, $12 billion share repurchase program under which it began buying back and retiring common stock in its latest strong -- albeit relatively unsurprising -- quarter. More specifically, Nike managed to increase quarterly revenue a modest 7.7% year over year, to just over $8 billion, and grow net income and earnings a much more impressive 20% (to $950 million) and 22% (to $0.55), respectively.

Meanwhile, Nike showcased its own stunningly innovative roots with its HyperAdapt 1.0 self-lacing shoe, the likes of which helps explain how the company is consistently able to demonstrate superior pricing power and expects gross margin to expand by another 50 basis points when all is said and done this fiscal year.

What's more, Nike is currently working on shifting its Converse brand to a more direct operating model overseas. Keeping in mind timing of shipments related to that transition caused Converse revenue to actually decline 9% year over year last quarter, the popular brand should ultimately return to growth and allow Nike to more effectively demonstrate the strength of its consolidated businesses to investors going forward.

In short, I think Parker was right to remind investors last week that, given the combination of its focus on innovation, strategic investments in growth, shareholder-friendly capital returns, and financial discipline, "Nike consistently delivers value to [its] shareholders."

The bottom line
Much has changed with Nike and Under Armour over the past three years, and both companies have laid out compelling long-term plans to drive profitable growth. But here again, I think both Nike and Under Armour can serve two distinct purposes for different kinds of investors. Nike, for its part, is an industry stalwart that demonstrates modest, but healthy growth and boasts generous capital returns programs. And seemingly against all odds, Under Armour has managed to accelerate its annual growth targets despite building from a significantly larger base, and enjoys outsized growth opportunities in footwear, direct-to-consumer, and from its still-small international business.

Personally, I still prefer Under Armour -- rich valuation and all -- given its incredible growth ambitions and global opportunity to continue taking market share. But for investors who wisely enjoy capital returns and would rather avoid the volatility that comes with a richly priced stock, Nike should continue beating the market as well.