Fuel cells haven't taken off as hoped in the energy sector, but is now the time to buy?

Fuel cells have generated a lot of hype and a lot of disappointment for investors over the past decade. You can see below that Fuel Cell Energy Inc's (FCEL 1.59%) stock has taken a nosedive, with a few spurts of investor excitement thrown in. Is a turnaround imminent for the company, or is this just another "story stock" that never quite panned out? 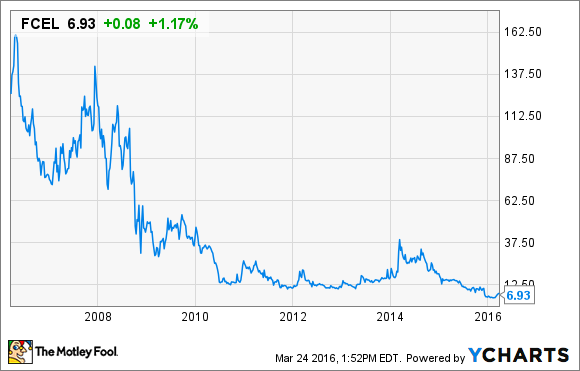 Impressive numbers hide a bad history
If you look at Fuel Cell Energy's first quarter of fiscal 2016 earnings, you might see some positive trends. Backlog was up $22.5 million sequentially to $403.9 million. That sounds impressive for a company with $33.5 million in quarterly revenue.

But take a look at the company's backlog after the first quarter of fiscal 2013 and you'll see that it was $428.1 million at the time. And that was coming off a quarter where revenue reached $36.4 million.

Projects like the 5.6 MW Pfizer and 63 MW Beacon Falls Energy Park can also mask the problems at Fuel Cell Energy. These projects are contracted and being built, but they're also reflected in the backlog, which I highlighted has been falling as the company has been reporting losses. And therein lies its biggest problem.

Is improvement ever coming?
Fuel Cell Energy has been playing up the potential of its business for years, but you can see below that it's nowhere near reporting a long-term profit. In fact, revenue and earnings have both been on the decline lately. 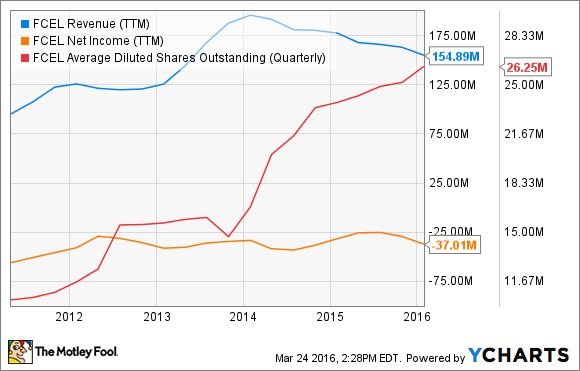 The other major concern is that management constantly needs to raise new capital to keep the business afloat. Since the fiscal 2013 backlog of $428.1 million was announced, the company's shares outstanding have nearly doubled.

Even if a financial turnaround is on the horizon, investors are getting a smaller and smaller piece of that benefit every day.

Fuel Cell Energy is not a buy
Until Fuel Cell Energy proves the ability to make money on the projects it builds and grow revenue long-term, this is definitely not a stock I would buy. There's too long a history of financial disappointment and dilution for investors to buy into the potential the fuel cell industry might have. Investors interested in the space should be cautious, because the large backlog and big-time growth potential may never lead to the stock appreciation you're looking for.