Bank of America's and Citigroup's dividends have a lot of room to run.

For investors in bank stocks today, there's a clear upside to the struggles faced by Bank of America (BAC 0.72%) and Citigroup (C 3.26%) over the past decade. These two banks, more than any of their megabanking counterparts have the most room to raise their dividends in the years ahead.

If you've followed Bank of America and Citigroup since the financial crisis, then you know that they were both forced to cut their dividends to virtually nothing in its wake in order to preserve capital, which could then be used to absorb losses. Bank of America's dividend dropped from $0.64 per share each quarter down to $0.01 per share, while Citigroup's declined from a peak of $0.54 per share down to $0.01 per share. 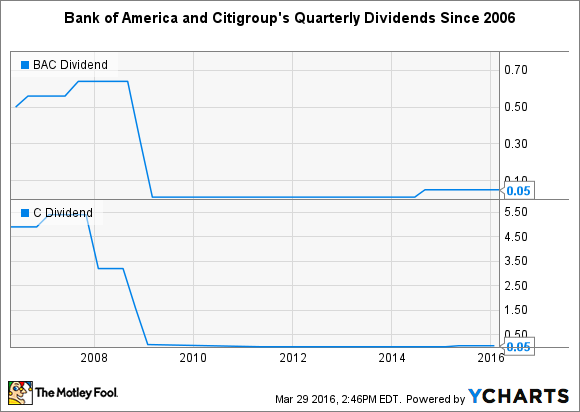 *NOTE: Citigroup's historical payout is distorted by its 1-for-10 negative stock split in 2011.

Since the crisis, moreover, Bank of America and Citigroup's attempts to increase their quarterly distributions have been stymied on multiple occasions by the Federal Reserve, which has authority under the Dodd-Frank Act to veto bank capital plans. In 2011, for instance, Bank of America's request to increase its dividend was denied. The same thing happened to Citigroup in 2014.

The net result is that the nation's second and fourth largest banks by assets, respectively, have only been able to increase their payouts once each since 2008. Bank of America received permission to boost its payout in 2014 to $0.05 per share, while Citigroup got the go-ahead the following year to increase its quarterly dividend to $0.05 per share.

By contrast, many of the nation's other leading lenders have increased their dividends every year for the past half-decade. This includes JPMorgan Chase and Wells Fargo. Because these banks were able to sidestep the worst excesses in the lead-up to the crisis, both emerged from the turmoil in relatively strong financial health. The Federal Reserve has thus felt comfortable that allowing them to bolster their distributions wouldn't jeopardize the banks' safety and soundness.

The net result is that Bank of America and Citigroup now pay out a smaller share of their earnings each year than any other major bank. Over the past 12 months, Bank of America has distributed only 22% of its earnings to shareholders via dividends while Citigroup's payout ratio is a mere 7%, according to data from YCharts.com. By contrast, the average payout ratio among the nation's 16 biggest banks over this stretch is 29%, with BB&T topping the list at 45%.

The upside is that Bank of America and Citigroup, despite their many troubles since the crisis, have more room to grow their dividends over the foreseeable future than any other major bank.