Shareholders in Triump Group, Inc (TGI -0.51%) have a tough decision on their hands today. To buy shares, or to sell them? There are reasons to cut and run. Revenue and profits for FY 2016 are now expected to come in at the bottom end of the company's own guidance. Moreoever, analysts expect revenue and profits to decline again in FY 2017 - not what any shareholder wants to see. Despite these issues, there maybe a case for value investors buying the stock, particularly as a turnaround could be on the cards. Let's take a closer look.

The bear case for Triumph Grouph, Inc
It's not easy being a supplier to aircraft manufacturers like Airbus, The Boeing Company (BA 1.46%) or General Dynamics.The typical business cycle of a company like Triumph involves signing contracts with aircraft manufacturers, then building out capacity to meet them while hoping that production rates and aircraft orders keep growing.

Consequently Triumph Group's earnings and cash-flow tend to be lumpy and subject to a high degree of uncertainty. It's wonderful when the market turns up and Triumph is well positioned on programs, but terrible when the market turns down and Triumph is left exposed to costs built up to service a deteriorating work load. As you can see below, EBITDA margin and productivity are highly variable. 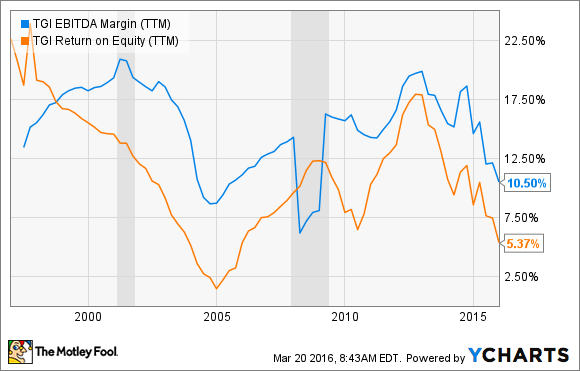 Unfortunately, despite a strong commercial aerospace market, Triumph faces issues going forward -- disappointing because this is precisely the point in the cycle where Triumph should be reaping the rewards of the upturn in aerospace. The issues were discussed in more detail in a previous article, suffice to mention three key points:

Triumph has been negatively affected by the production rate cuts on the Boeing 747-8 and Boeing 777. The former is seeing weaker than expected demand due to a weak cargo freight market and the latter's sales growth is disappointing as customers are preferring to wait for the new Boeing 777X plane.

The impact can be seen in margin and stock price chart below, and despite being on a projected P/E ratio of less than 6 times earnings for 2016, Triumph is set to generate minimal free-cash-flow this year. 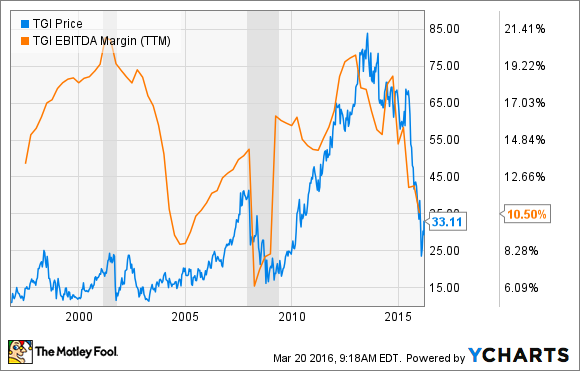 Bear case summary: Triumph Group, Inc needs to generate new work on airplane programs  in order to counter disappointments on the 747-8 and 777 programs, and it's relatively late in the developmental cycle on programs. Meanwhile the business jet exposure gives Trump even more exposure to highly cyclical end markets. In short, if the commercial aerospace market turns down then Triumph will be hit hard.

The bull case
On the other hand, it's not hard to see how Triumph Group has plenty of upside potential:

Based on most valuation metrics Triumph Group is cheap. As you can see below, based on price-to-sales and price-to-book (useful ways to look at highly cyclical stocks) Triumph is even cheaper than it was in the depths of the last recession. 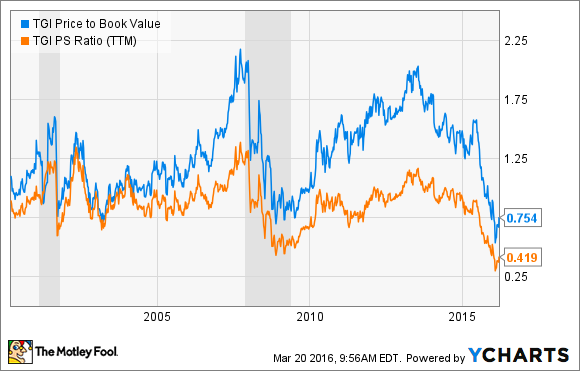 Furthermore, it's not expensive on a historic Enterprise Value (market cap plus net debt) to Earnings, Before Interest, Tax, Depreciation and Amortization basis (EBITDA), while its forward EV/EBITDA valuation makes the stock look a great value.

Meanwhile, if Crowley's attempts to win new business from Boeing -- CFO Jeffrey McRae claims Triumph has "prior agreements with Boeing that would shift 100% of production requirements to Triumph" on the 777 program -- and Airbus bear fruit then analysts could be rushing to upgrade earnings forecasts.

Bull case summary: The commercial aerospace market remains in good health, and Triumph Group's downside is limited while any good news on future contracts is likely to lead to significant upside to the stock.

If you are looking for exposure to aerospace then a stock like United Technologies or Honeywell International probably offers more to the average investor. They have better quality of earnings and wider program exposure. Moreover, if you are running a relatively concentrated stock portfolio the high risk/reward profile of Triumph Group will probably give you a little more risk than you might want.

On the other hand, Triumph's investment proposition could sit nicely in a value-based investors portfolio, particularly one looking for upside potential from a high risk/high reward stock. Any kind of good news on future contracts and Triumph Group is likely to move higher.