After plunging in the first few weeks of 2016, oil prices have bounced back. Surprisingly enough, that has also helped airline stocks recover.

Given that jet fuel is one of the biggest expense items for an airline, it would have been natural to expect airline stocks to rise as oil plummeted. Instead, they plunged, only recovering after oil prices started to bounce back.

Airline stock performance tied to oil
Oil price swings have been a primary cause of airline stocks' gyrations for the past three months. During the first three weeks of 2015, Brent crude prices fell nearly 30%. Shares of United Continental bottomed out around the same time, down almost 25%.

Shares of American, Delta, and Southwest bottomed out a couple of weeks later, down about 20% from late December. 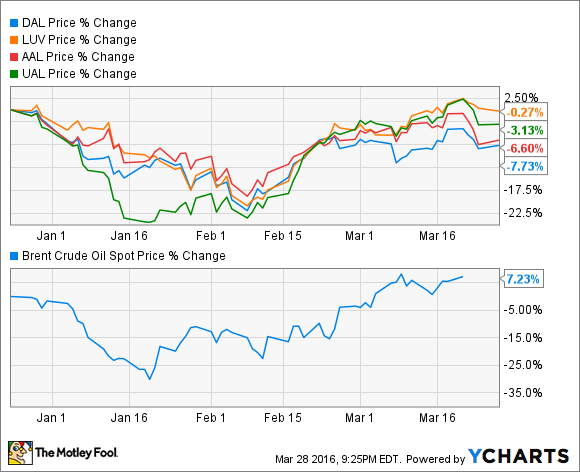 However, since reaching a nadir on January 20, oil prices have jumped more than 50%. Airline stocks have rebounded, too. Southwest Airlines stock is back where it was three months ago, while shares of American, Delta, and United are now down modestly year to date.

Making sense of the relationship
So, why have airline stocks been tracking oil prices so closely recently? To some extent, there's a direct link, as low oil prices have caused sharp declines in energy industry activity. That's hurt the economies of many oil-producing countries. Energy companies have also slashed corporate travel -- this had a particularly severe impact on United, which operates a big hub in Houston.

However, a bigger driver of the airline stock price declines appears to be a widespread fear that low oil prices were causing airlines to dial up capacity growth, causing fares to fall.

Indeed, domestic airline capacity increased 5.3% year over year in 2015, according to the U.S. Department of Transportation. That was the biggest increase since 2004 and nearly equaled the total domestic capacity increase over the previous five years combined! Not surprisingly, average airfares have been declining for about a year now.

Airfares have been declining across the industry over the past year.

Nevertheless, airline industry profits surged to a record high in 2015 and may continue to rise in 2016 as fuel hedging losses dissipate at carriers like Delta and United. This suggests that a big reason why airlines haven't reined in capacity growth yet is that they are making lots of money, even with lower fares.

What happens now?
The jump in oil prices and airline stocks over the past two months indicates that investors have become more comfortable with the global economic outlook. It also implies that investors expect airline unit revenue to return to growth soon, bolstered by tighter capacity discipline.

Indeed, airlines have recently displayed increasing urgency to get unit revenue growing again. However, it's not clear that this has anything to do with the recent rise in oil prices. And there haven't been any notable capacity cut announcements in the past two months.

Meanwhile, the further oil prices rise, the more pressure there is for airlines to grow unit revenue. When oil was in the $30/barrel range, airlines could look forward to another year of solid profit growth even with declining unit revenue. If oil rises toward the $50/barrel mark this year, some airlines could find their profits eroding quickly if fares keep falling.

In the long run, airlines should be able to offset the majority of any fuel price increase through higher fares. The U.S. airline industry is concentrated enough that American, Delta, Southwest, and United can cut capacity if necessary without worrying too much about market share losses.

However, in the short run, all bets are off. There is bound to be a lag between when oil prices start to rise and when airlines dial back capacity to bolster fares. Furthermore, it's doubtful that many airlines could replicate their current profit margins if oil were to return to the $80-$100/barrel level at some point in the future.

Higher oil prices could ultimately help get airlines' unit revenue growing again. But if oil prices continue rising, airline investors may find themselves longing for the days of rock-bottom oil prices and falling unit revenue -- because that has been a recipe for record profits.