Alaska Airlines Group is one of two carriers said to be submitting bids to acquire Virgin America. Here's why the Seattle-based airline would benefit from acquiring the Virgin brand. 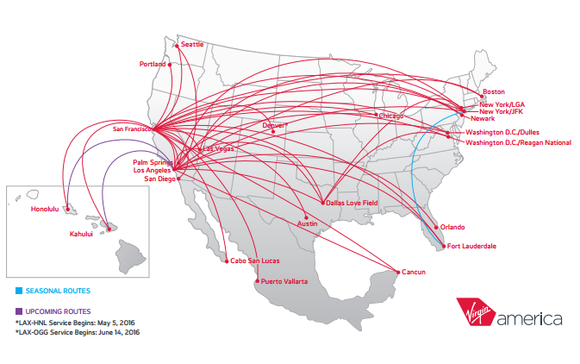 On the surface, a JetBlue acquisition of Virgin may seem more appropriate than one led by Alaksa Airlines Group. As Bloomberg's news article pointed out, buying Virgin would give JetBlue a West Coast presence to supplement its Eastern seaboard network. JetBlue and Virgin both fly Airbus Group aircraft, while Alaska is a Boeing shop.

Still, there are several persuasive arguments for Alaska Airlines to seriously entertain a purchase of the California-based airline, which launched in 2007. Let's take a brief look at three major reasons Alaska would indeed want to submit a competitive bid to pull Virgin into its operations.

Virgin's fleet actually fits Alaska's preferred profile
Virgin America flies 50 Airbus A320 and 10 Airbus A319 single-aisle aircraft, and though it's chosen a completely different platform than Alaska's Boeing planes, Virgin follows a similar operational plan. By keeping an extremely homogeneous fleet of two primary Airbus models, Virgin reduces maintenance expense, as parts can be interchanged between planes, and all mechanics work on essentially one type of aircraft.

Alaska has successfully honed its operations by similarly focusing on one type of plane: the Boeing 737 series. Since the company would likely keep the successful Virgin America branding upon acquisition and operate the smaller carrier "as-is," the platform conflict isn't really an issue. But Alaska executives must be attracted to this mirror image of the company's own operations. And it should be noted that Alaska already has a great amount of experience in consolidating a smaller airline with a separate engine platform. Its Horizon Air subsidiary serves 42 cities in the western U.S. using a fleet of 52 Bombardier Q400 planes.

Aircraft age is another similarity between Virgin's fleet and Alaska's desired plane profile. Alaska makes a practice of buying newer, more fuel-efficient planes, and it maintains one of the youngest fleets in the industry, with an average plane age of 9.6 years. Virgin's fleet is even newer, with an average age of just 6.3 years.

An opportunity to shore up a strong West Coast presence
While it's true that Virgin America's West Coast coverage would nicely complement JetBlue's East Coast routes, potential merger advantages also exist for Seattle-based Alaska. Virgin's headquarters are situated in San Francisco's Terminal 2. As you can see from the flight map at the top of this article, Virgin has significant presence in both San Francisco and Los Angeles, with an attractive number of routes into both Mexico and the Northeast.

Adding these routes through a subsidiary would refortify Alaska's presence in the western states. The company has been under a market share siege by Delta Air Lines (DAL -1.25%) since 2013. Most of the skirmish has been focused on Seattle, as Delta adds domestic and China-bound flights on Alaska's home turf. Acquiring West Coast capacity outside of Seattle helps Alaska mitigate revenue pressure as it withstands the international giant's assault.

In particular, Virgin's coast-to-coast route focus is intriguing, as Alaska has placed an emphasis on expanding eastward to diversify its revenue from the very earliest Delta route incursions in Seattle.

Attractive deal economics
It may have had help from low oil prices like most of its peers, but nonetheless, Virgin America recently reported an extremely successful year. The company booked $177.2 million of operating income on revenue of $1.5 billion, achieving an operating income margin of 11.6%. Net income was even higher, at $340.5 million, but this was due primarily to an outsized, one-time $173.5 million income tax benefit.

Alaska and JetBlue are undoubtedly drawn to Virgin's income statement and balance sheet, as the airline is presently generating profits without much of a debt load to speak of. This is very much in line with Alaska's own debt philosophy, as Alaska has paid down its borrowings over the last five years and is one of the few airlines worldwide to sport an investment-grade credit rating.

Virgin has skirted debt by building its fleet through long-term operating leases, and it presently owns only seven out of 60 planes. The lack of balance sheet debt and the upcoming expiration of 26 leases between 2019 and 2022 would give Alaska an immense amount of flexibility in optimizing Virgin's fleet economics. It could use some of its own cash or debt availability to purchase more planes, or renegotiate the expiring leases on much more favorable terms, given its greater financial strength.

Virgin's business resembles Alaska's in a few other intriguing ways. Like Alaska, the company attempts to present a higher-quality travel experience versus larger legacy airlines. It's cost-conscious, with an efficient CASM (Cost Per Available Seat Mile) last year of just 10.7 cents -- roughly equal to Alaska's own 2015 CASM. It balances fare revenue with an appreciable amount of add-ons: Both Virgin and Alaska rank in the top 10 airlines worldwide when ancillary revenue per passenger is measured.

Alaska Airline's management team understands that if it consolidates the smaller airline into its system while retaining the Virgin brand, profitability could likely be improved. Alaska's metrics-based employee incentive program, which focuses on cost reduction, quality, safety, and on-time arrival, could very well boost Virgin's margins. Alaska won't comment on the matter at present, but considering the points above, we shouldn't be surprised if it's soon revealed that the company has indeed submitted a bona-fide -- and competitive -- bid for Virgin America.

Asit Sharma has no position in any stocks mentioned. The Motley Fool recommends Virgin America. We Fools may not all hold the same opinions, but we all believe that considering a diverse range of insights makes us better investors. The Motley Fool has a disclosure policy.