Please ensure Javascript is enabled for purposes of website accessibility
Log In Help Join The Motley Fool
Free Article Join Over 1 Million Premium Members And Get More In-Depth Stock Guidance and Research
By Jay Jenkins - Mar 29, 2016 at 9:04AM

This regional bank has been hammered so far this year. The question is if the market has gotten it right.

PNC Financial Services Group (PNC 1.60%) currently trades at a price-to-book value ratio of 0.96 times. That means that investors value the bank's stock at less than the value of its assets minus its liabilities. Worse yet, that valuation has decreased 10% since January 1.

In other words, something is up, and it's not the stock price. To understand what's driving the poor stock performance, let's take a closer look at the bank's current fundamentals.

What drives a bank's value?
The first step to understanding changes in valuation is to understand how the markets value banks. The banks that will command the highest valuations will be the banks with exceptional credit quality over time and robust earnings today. They will also be positioned to succeed in whatever macroeconomic environment impacts the business in the future.

First, a bank can only succeed if the loans it makes are repaid. If investors have concerns that a bank's credit quality is deteriorating, the stock will trade lower to reflect the possibility of increased losses from those troubled loans. A simple way to monitor a bank's loan quality is with the ratio of its non-performing assets -- severely delinquent loans plus foreclosures -- to its total assets.

Once the market has assessed the bank's credit quality, it next looks to its earnings and earnings potential. This encompasses two components: the bank's profits today, and the outlook for its profits in the future. Current profits are measured relative to the bank's total assets and to its equity. Return on assets provides a clear view into the profit engine's core, giving context to both expense management and revenue generation. Return on equity takes it a step further, informing investors how optimized the bank's balance sheet is for shareholder returns.

Future earning potential takes into consideration profitability today, plus the interest rate and economic environment, the bank's mix of different revenue streams, and assesses management's strategic plans for the future. For example, a bank that tends to operate with low costs and focus on interest revenues would likely be better positioned to take advantage of an increase in interest rates than another bank that focuses more on fee-based revenues with different economics.

Where does PNC Financial Services Group fit into today's market environment?
In today's market, the best large banks -- those most comparable to PNC -- are being valued in the 1.5 to two times book-value range. Those banks, like perennial high-performer U.S. Bancorp (USB 0.97%), have very low levels of non-performing assets, have returns on equity of 10% or more, and have a healthy mix of revenue from both interest income and non-interest income. These banks tend to operate with lower cost structures, creating positive operating leverages to support profits no matter how quickly or slowly the Federal Reserve raises interest rates.

On the other end of the spectrum, lower-performing banks are trading well below their book values, sometimes as low as 0.5 to 0.6 times. Generally, their returns on equity fall below 5%-6%, returns on assets are well below 1%, and the market may have questions regarding their revenue mix or exposure to certain trouble industries like oil and gas.

Capital One Financial (COF 2.24%) is a good example of the latter. The bank's return on assets and equity have been in line or better than comparably sized large banks, but the bank still trades at just 0.78 times its book value. The reason for this is a concentration of loans in the energy sector, which are under siege by low oil prices plus loan exposure to taxi companies facing the disruptive threat from ride-sharing apps like Uber and Lyft.

The bank's overall level of non-performing loans to total assets is actually below the industry average today, but the ratio is trending higher, and analysts are concerned about the future. An increase in problem loans in those two sectors caused the company to miss widely Wall Street earnings expectations in the 2015 second quarter. Since then, the stock has tanked.

For PNC, the reality lies somewhere between the high-flying numbers posted by U.S. Bancorp and the struggles of Capital One Financial. The bank's earnings, credit quality, and strategy are all in line with other large regional bank averages. Its valuation relative to its peers follows those fundamentals, coming in just below the current average for large banks.

*ROA, and ROE for U.S. banks with more than $10 billion in total assets, sourced from the FDIC's fourth-quarter 2015 Quarterly Banking Profile. All other data from sample of 59 large banks, provided by S&P Capital IQ, and from company specific SEC filings.

If PNC's value is reasonable compared to its peers, what's up with the big drop so far this year?!
The sharp move lower to start 2016 has more to do with macroeconomic concerns than any particular issue with PNC itself. Financial stocks, in general, have been hit worse than the rest of the market, and PNC is no exception. Even the industry leaders, like U.S. Bancorp, are down year to date. 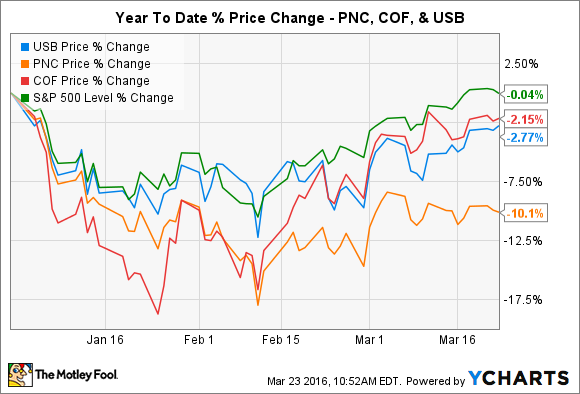 Why? Because the Federal Reserve has indicated that it may not raise interest rates as quickly as the market expected. Combine this with global economic concerns and the state of oil prices, and a tough market is created for financial stocks.

In my view, however, PNC's drop could be the buying opportunity investors have been waiting for. The bank's exposure to the energy sector is limited, and management clearly articulates its risk and focus on those loans to investors on its quarterly conference calls. PNC has lowered operating costs for three consecutive years, and anticipates accomplishing the same in 2016.

Those cost savings come even as the bank rolls out major investments in technology, branch upgrades, and a modernization of the overall customer experience. It has a strong track record of risk management throughout the ups and downs of the economic cycle, and has a strong balance sheet to back it up if the economy hits a speed bump.

While its performance and valuation fall short of the elite level of U.S. Bancorp, PNC today looks like, in the words of Warren Buffet, "a well-managed bank at a fair price." Investors shouldn't worry about the rough start to 2016. In the long term, PNC's fortunes look as bright as ever.