Big beer has had a rough few years, but these catalysts could help Molson Coors' stock.

The beer business may be dominated by companies like Molson Coors Brewing Company (TAP 0.35%) and Anheuser Busch Inbev (BUD 1.50%), but that doesn't mean it's an easy business to be in. Revenue growth has been hard to come by lately, and margins have been squeezed by the rising dollar and pricing pressure.

Yet, Molson Coors' stock keeps rising. And here's what could keep it rising. 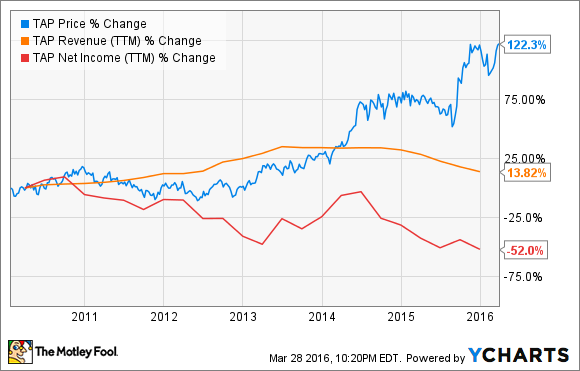 Scale pays off
A lot of the rise in big beer stocks has been based on M&A activity and an assumption that margins will rise as a result of scale. So far, that hasn't come to fruition, but it could in the future in a big way.

One point of leverage that scale has is in marketing. In 2015, Molson Coors spent a whopping 29.5% of net sales on marketing, general, and administrative expenses. That's nearly half of what it spent to actually make beer. But Molson Coors' size, and a smaller number of competitors in the market overall, could allow it to spend fewer ad dollars and see them go further. Even a 5% or 10% decline in the marketing, general, and administrative line item could have a big impact on profitability.

Will there be newfound pricing power?
Another goal of M&A is to reduce the number of competitors, which increases pricing power. Management has said that net pricing increases have helped the business of late, and this could be a big tailwind in the future.

MillerCoors (a joint venture of SABMiller (NASDAQOTH: SBMRF) and Molson Coors) saw its domestic sales to retailers decline 2.2% in the fourth quarter, and sales to wholesalers fell 3.1%. But revenue per unit was up 1.5%, offsetting some of the volume decline. If Molson Coors, and for that matter Anheuser Busch INBev, can raise prices for light beer, it'll be a positive for both of their businesses, even if volume declines slightly.

Craft beers lose momentum
Most of the troubles of big beer can be attributed to the rise of craft beer. According to the Brewers Association, overall beer volume sales grew just 0.5% in 2014, but craft beer sales jumped 17.6%. It's not hard to see that non-craft beer is losing ground at the moment.

But in the drinking business, trends can turn quickly. If craft beer growth starts to slow and Molson Coors can begin to take market share again, it could be a big help to the stock. But this is the least likely catalyst to take place in the near future.

Big beer has headwinds
Molson Coors' stock has done well over the past few years, but that doesn't mean its business doesn't have challenges. Big beer is seeing slowing demand, and efforts to buy craft brands can only offset so much of the lost sales.

The major hope is that consolidation in the industry will lead to rising margins as sales prices rise and marketing costs fall. If that happens, this stock will run higher, but shares are already trading at 18 times analysts' 2017 earnings estimates, which is a steep price for a company facing so many operational headwinds.

Travis Hoium owns shares of Molson Coors Brewing Company. The Motley Fool recommends Anheuser-Busch InBev NV. We Fools may not all hold the same opinions, but we all believe that considering a diverse range of insights makes us better investors. The Motley Fool has a disclosure policy.