Analysts at Barclays think the rally in oil and copper is overdone.

Analysts from Barclays (BCS 1.43%) issued an indirect warning for Freeport-McMoRan (FCX -2.34%) investors: Watch out below. That's after the bank said that the price of both copper and oil are at risk of a significant near-term drop, unless there's some real improvement in market fundamentals to support their recent rise. That's a big concern for Freeport-McMoRan because those commodities are its top two revenue generators and a big reason why the stock has enjoyed such a fierce rally in recent weeks.

A roller-coaster ride
Both oil and copper slumped out of the gate this year. Copper touched a 7-year low in mid-January amid concerns of a slowdown in the Chinese economy. Meanwhile, oil hit a more than 13-year low around that same time due to concerns that Iranian supply hitting the market would exacerbate the industry's oversupply issues.

However, both commodities rebounded over the past month and a half, sending Freeport-McMoRan's stock up sharply: 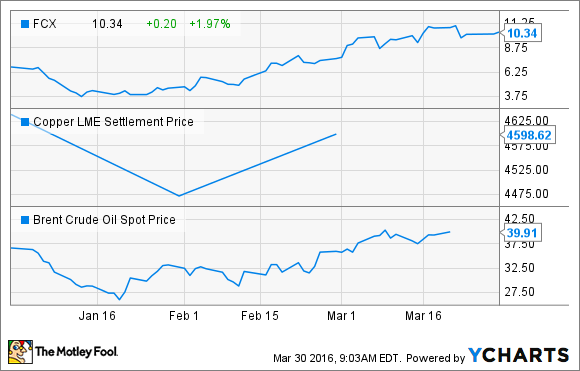 This surge was due to easing concerns about Chinese growth as well as a reported potential oil output freeze by OPEC and Russia. That being said, China's economic growth isn't accelerating, nor is the output freeze set in stone. As such, Barclays is worried that the price for oil and copper might be getting too hot, given that nothing has fundamentally changed. It was a thesis summed up by Barclays' team lead Kevin Norrish, who noted:

Given that recent price appreciation does not seem to be very well founded in improving fundamentals and that upward trends may prove difficult to sustain, the risk is growing that any setback will result in a rush for the exits that could again lead commodity prices to overshoot to the downside...There are several reasons to believe that a short-term turning point for investor flows might be close.

That potential downside risk is substantial according to the bank's analysts, who are warning that the price of copper and oil could both slump 25% from their current levels. That could have oil falling back below $30 a barrel while copper could drop to the low $4,000-a-tonne range, or below $2 per pound.

Hoping that doesn't happen
Such a reversal would be a tough break for Freeport-McMoRan because it really needs the price of both commodities to at least stabilize at their current price or, better yet, keep going higher. That's because it would provide the company with the cash flow it needs to not only meet its capex needs but pay down some debt. In fact, Freeport-McMoRan's initial plans for 2016 were based on copper averaging $2 per pound with oil expected at $45 a barrel. That would enable it to generate enough cash flow to fund its $4 billion capex budget with $600 million left over for debt reduction, though that's a paltry amount for a company that owes well over $20 billion.

That said, most recently copper hit $2.19 per pound, which is a level that Freeport-McMoRan would gladly see hold for the year. That's because a $0.10-per-pound change in the price of copper impacts the company's annual cash flow by $400 million. So, if copper can average $2.20 per pound this year it would pump an additional $800 million in cash flow into Freeport-McMoRan's coffers. That would help it offset the weaker oil price, where every $5 per barrel change impacts cash flow by $170 million. Suffice it to say, if both oil and copper plunge, it will have a significant impact on the company's ability to generate excess cash flow this year, making it all that much harder to make a dent in its debt. That's on top of the impact it will have on its ability to sell assets, which would fetch a much better valuation if oil and copper prices are on the rise, or have at least stabilized.

Investor takeaway
Freeport-McMoRan really needs Barclays to be wrong because it desperately needs oil and copper prices to at least stay right where they are, if not improve further. That's because the company's cash flow is directly affected by the rise and fall of the price of oil and copper, so a 25% plunge would take a big chunk out of its cash flow. Needless to say, it's hoping that the market fundamentals quickly catch up in order to keep these commodities from nose-diving and taking its stock with it.

Matt DiLallo has no position in any stocks mentioned. The Motley Fool owns shares of Freeport-McMoRan Copper & Gold. We Fools may not all hold the same opinions, but we all believe that considering a diverse range of insights makes us better investors. The Motley Fool has a disclosure policy.