Enthusiasm ahead of a key FDA decision on its SurgiBot robotic surgery system has propelled TransEnterix (NYSEMKT:ASXC) shares higher this year, but TransEnterix's management revealed this week that it's pushing back its timeline for a FDA go, no-go decision to April from March. 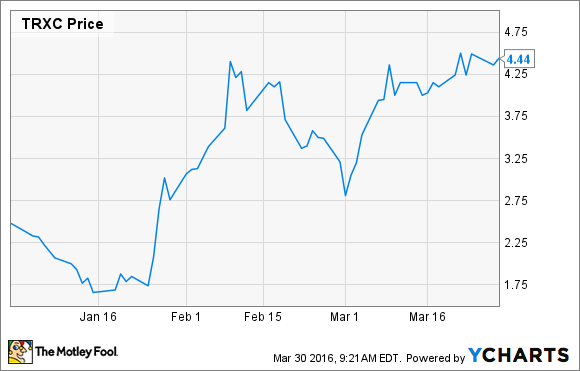 SurgiBot could allow TransEnterix to pose the biggest threat yet to Intuitive Surgical's (NASDAQ:ISRG) dominance in the fast-growing robotic surgery market, so let's learn more about it.

Improving procedures
Currently, Intuitive Surgical's da Vinci surgical system is the de facto market share Goliath in the industry. There are nearly 3,600 da Vinci systems installed at surgery centers worldwide, and sales of systems and the consumables associated with them exited 2015 at an annualized $2.7 billion pace.

Although Intuitive Surgical's da Vinci system is considered the industry gold standard, TransEnterix thinks its soon-to-launch SurgiBot offers distinct advantages to it that could allow it to carve away market share.

Specifically, SurgiBot's smaller footprint makes it easy to move from operating room to operating room and allows surgeons to perform procedures bedside, rather than from behind a console.

SurgiBot also offers an articulating camera that may provide surgeons with greater insight during procedures and haptic feedback that allows surgeons to feel precisely what the system's instruments feel.

The biggest advantage SurgiBot may offer over da Vinci, however, is a lower price tag.

The average da Vinci system sold for about $1.5 million last year, but TransEnterix plans to price SurgiBot at roughly $500,000.

At that price point, TransEnterix believes it can effectively compete for business with cash-strapped small and mid-sized hospitals that have previously foregone installing da Vinci systems. Small hospitals could offer a big market opportunity for the company because there are more than 3,000 hospitals with fewer than 200 beds in the United States alone.

Waiting game
Previously, management had expected a first-quarter decision on SurgiBot, which is being reviewed under the 510(k) pathway. However, management's latest timeline is for a decision to be made by regulators by the middle of April. The company didn't provide a specific reason for this delay.

Initially, TransEnterix filed for SurgiBot's approval last June, and in February, management reported it had "successfully completed its response" to questions posed by the FDA related to its filing. Therefore, it may not be a stretch to assume the FDA delay is tied to regulators digesting those responses, or asking additional follow-up questions. According to Emergo, the average time for a FDA decision on medtech submitted through the 510(k) pathway was nine months in 2015.

Risky proposition
There's no guarantee the FDA will approve SurgiBot or, if they do, that hospitals will embrace the system. Management indicates they "expect" clearance, but expectations can be dashed, and that means investors should remain cautious.

Caution may also be warranted with TransEnterix, because the costs associated with building and marketing SurgiBot will undoubtedly tax TransEnterix's balance sheet. Yes, the company has $47.1 million in cash on its books as of Feb. 29, and $69 million potentially available to it via stock offerings as of March 8, but operating expenses totaled $46.4 million last year, and they're likely to be substantially higher this year.