With a well-supplied market and its own debt issues, maybe the company shouldn’t be spending so much.

Chesapeake Energy (CHKA.Q) has been drilling its own grave for years by vastly overspending cash flow in a bid to grow production. However, with a mountain of debt to overcome and commodity prices at ultra-low levels, the company has finally slammed the brakes on production growth. That being said, while it has pulled back the reins on spending, the company still hasn't cut as deeply as some of its peers. Chesapeake appears to still be spending too much, which could really come back to haunt it if conditions don't improve.

The debacle that was 2015
Last year Chesapeake Energy burned through more than $3 billion in cash in order to push its adjusted production up by 8% over 2014's average. In doing so the company incinerated much of its cash cushion, allowing its net debt to rise: 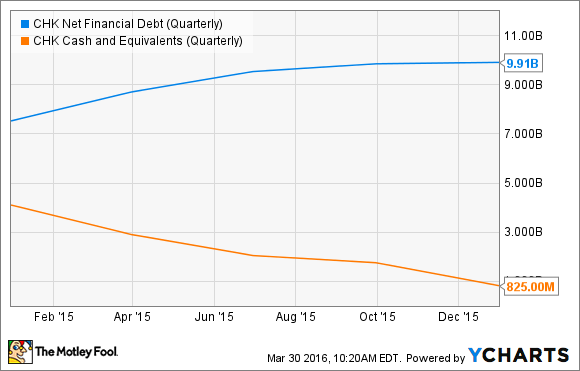 That left the company with precious little liquidity at a time when liquidity was (and is) at a premium. Furthermore, that production growth was completely unwarranted given that the oil and gas markets were well supplied. In fact, Chesapeake Energy and peers like Southwestern Energy (SWN -4.13%) really exacerbated the industry's supply problem by continuing to grow when that production wasn't needed, putting more downward pressure on commodity prices.

Tapping the brakes
With commodity prices even lower this year, and its liquidity almost dried up, Chesapeake Energy has had no choice but to cut spending deeply. The company only plans to spend $1.3 billion to $1.8 billion this year, which at the mid-point is 57% less than it spent last year. At best, this will be just enough to keep its adjusted production flat, while spending at the low end of its budget will result in its production slumping 5% over last year's average. While that's a steep cut, it will likely still be more than the company's cash flow, which is why it plans to help support its budget by selling assets. Under its current guidance, Chesapeake plans to unload $500 million to $1 billion in assets this year in order to both support its capex plan as well as to chip away at its gargantuan debt load.

Having said that, the company's plan to keep production roughly flat is quite ambitious compared to what some of its peers are planning. Southwestern Energy, for example, is cutting its capex budget from $1.44 billion all the way down to a mere $100 million to $125 million in order to generate excess cash flow to support its balance sheet. That's a stunning 92.5% drop at the mid-point. In fact, the company is being so cautious this year that's it not planning to drill a single well, which is a remarkable shift for a company that drilled 380 wells last year. This austerity plan will result in Southwestern Energy's production dropping by 15.5% over last year's average, a stunning shift for a company that grew its production by 27% last year.

Given Southwestern Energy's plan, and the fact that its balance sheet issues are no where near as dire as Chesapeake's, it begs to the question of why Chesapeake Energy isn't pursuing an austerity plan of its own. With plans to spend upwards of $1.8 billion this year to maintain production, that capital would be better used on debt reduction given the heightened concerns that the company could go bankrupt. Even redirecting $1 billion of that capital budget toward debt reduction would make much better sense given current commodity prices and the company's own dire financial situation.

Investor takeaway
While Chesapeake Energy is certainly spending less than it did last year, and has abandoned production growth, it still hasn't cut spending enough. This is a company that blew through billions of dollars last year on wells that weren't needed and is at risk of doing the same this year. Chesapeake would be better off following in Southwestern Energy's footsteps and halting all drilling so that it could redirect that cash toward debt reduction given how close to the brink of bankruptcy the company is right now.