Please ensure Javascript is enabled for purposes of website accessibility
Log In Help Join The Motley Fool
Free Article Join Over 1 Million Premium Members And Get More In-Depth Stock Guidance and Research
By Travis Hoium - Mar 30, 2016 at 8:55AM

Once the biggest renewable energy company in the country, SunEdison is now just trying to claw its way out of debt.

There isn't a lot going right with SunEdison Inc.'s (SUNEQ) stock right now. It's down more than 95% from its 52-week high and recently fell below the dreaded $1.00 per share. It's being priced like it's going out of business, and that might be the biggest thing investors need to watch for.

Debt is a problem, but not the biggest
The most telling chart about SunEdison right now is the one below. The company has taken on over $11 billion in debt since 2013; now, it's drowning under that debt load. 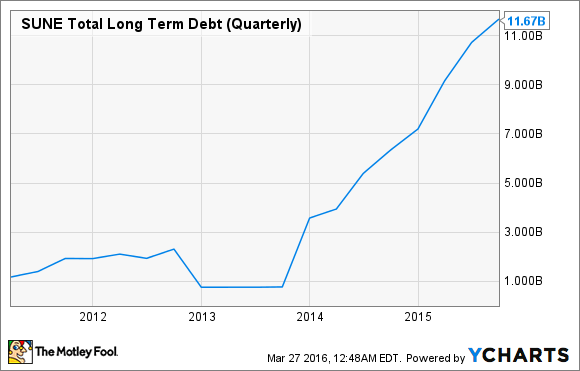 Some of that debt is in its yieldcos TerraForm Power (TERP) and TerraForm Global (NASDAQ: GLBL), but SunEdison isn't helping matters. The bigger problem may be that yieldcos might not be able to get SunEdison out of this mess as planned.

Yieldcos aren't helping
When SunEdison launched its two yieldcos, the plan was to develop projects and then drop them down to the yieldcos for long-term ownership. This would allow SunEdison to extract the most value from its renewable energy projects long-term.

The problem is, that model relies on yielcos having low dividend yields, which would allow them to issue new equity to buy projects from SunEdison, and requires them to have low borrowing costs. If you don't have a low cost of capital, you can't pay top dollar for renewable energy projects and still make money.

But both debt and equity costs seem to be moving in the wrong direction. TerraForm Power now yields 16.4% from its dividend and TerraForm Global yields 42.8%. Both are priced as if their dividends are going to drop, or worse.

Debt costs are likely rising as well. Moody's recently downgraded the debt of both companies due to the risks inherent in their affiliation with SunEdison. And the high cost of capital could put a cap on yieldco growth in the future.

Without the two yieldcos, SunEdison has had to turn to third-party sales, and that doesn't appear to be going well at all.

What about the financials?
The latest news from SunEdison, which caused shares to plunge on Tuesday, is that TerraForm Global won't be able to file its 10-K by the March 30 deadline, due to problems with SunEdison's accounting. The Wall Street Journal is reporting that the SEC is looking into liquidity disclosures SunEdison made, which may not have been accurate.

If we can't trust a company's financials, what can we trust? But all of these problems go to the biggest problem the company has with its business.

SunEdison's biggest underlying problem
High debt levels, a rising cost of capital, and delayed financials are bad, but the worst problem for SunEdison is that it's not executing on its own plans. As I mentioned, the company is shifting to a strategy of developing projects and selling them to third parties. But its development business doesn't appear to be firing on all cylinders.

In February, Hawaiian Electric canceled power purchase agreements for 148 MW worth of solar projects because they were months behind schedule. The details are confusing, at best, but there's no disputing that SunEdison missed major milestones repeatedly. If the company can't even get the construction of contracted projects right, how can investors trust its business. These kind of execution misses have exacerbated debt problems and led management to overextend itself.

It's the lack of execution that calls into question all of the debt and the acquisition/yieldco strategy. If there's not a steady developer behind all of that then there's a major problem. And that's the biggest problem plaguing SunEdison today. All of the debt and financial problem stem from a lack of operational execution in buying, bidding, building, and operating solar projects. If SunEdison can't get its core business right, why should anyone be interested in the stock?