If your PC is equipped with a graphics card, you can thank one of these two chip giants.

Chipmakers AMD (AMD 5.39%) and NVIDIA (NVDA 7.21%) have a duopoly on the market for dedicated graphics cards. Together, the two firms sold 50 million of them last year, according to Jon Peddie Research.

But which is the better pick for investors? Let's take a closer look at each business, comparing valuation metrics and assets to see which one may be more attractive.

GPUs, CPUs, and SOCs
Both NVIDIA and AMD derive virtually all of their revenue from their chips, most of which can be found powering traditional PCs. AMD competes in a couple of different markets, offering a variety of graphics and computer processors, as well as some systems on a chip. NVIDIA's business, in contrast, is dominated almost entirely by its graphical processors, although its Tegra line of SoCs does bring in a nontrivial amount of revenue.

AMD is a secondary player in most of the markets it participates in. It splits the demand for x86 processors (the sort that power the majority of traditional laptops and desktops) with rival Intel (INTC 2.85%), which is a much larger and far more dominant firm. In recent years, Intel has captured more than 80% of the market for x86 processors, leaving AMD with less than 20%. The same is nearly true for graphical processors. AMD's chips powered about 24% of the graphics cards sold last year, compared to nearly 76% for NVIDIA. AMD also sells SoCs for servers, and its semi-custom SoCs power both the PlayStation 4 and Xbox One.

PC gamers and graphics professionals are NVIDIA's primary market, as those groups purchase the majority of NVIDIA's GPUs. But some are also used in datacenters, and its Tegra chips are seeing increased usage in automobiles and, to a lesser extent, Chromebooks and Android tablets.

In 2015, AMD generated just under $4 billion in revenue, and posted an operating loss of $481 million. About 45% of its revenue came from the sale of CPUs and GPUs last year, with the remaining 55% from its semi-custom chips used in video game consoles and servers. Those semi-custom chips brought in $215 million of operating income, though that was offset by CPU and GPU-related losses.

In contrast, NVIDIA was profitable in its fiscal year 2016, which ended Jan. 31. NVIDIA brought in just over $1.4 billion of revenue and generated operating income of $252 million. PC gaming accounted for about 58% of NVIDIA's sales, with GPUs designed for professionals chipping in just under 15%. Datacenter and automotive each brought in about 7%. The rest came from NVIDIA licensing its intellectual property out to other chip-makers, as well as laptop OEMs.

One is generating income, the other is losing money
Given that AMD has been losing money for some time, it can't be valued under traditional metrics like its trailing price-to-earnings ratio. Using alternative metrics, such as price-to-sales, AMD appears cheaper than NVIDIA (roughly 0.5 compared to about 4). 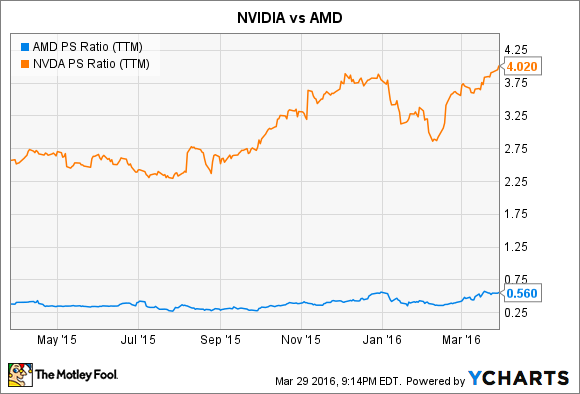 But in addition to being profitable, NVIDIA pays a dividend. It's not much (the stock is currently yielding a relatively paltry 1.33%), but it's better than what AMD is offering (nothing). Plus NVIDIA is a growing company: its revenue rose 12% last fiscal year. AMD's contracted nearly 28%. NVIDIA is expensive compared to other firms in the space (its price-to-earnings ratio of around 32 is considerably higher than Intel's 13.8), but with its push into self-driving cars and virtual reality, it may offer investors far more upside. 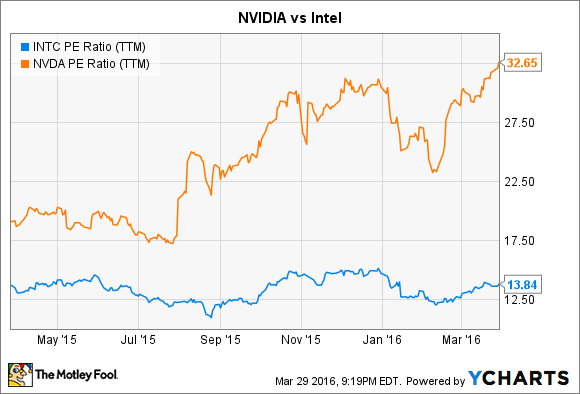 At current prices, NVIDIA shares certainly aren't a bargain, but it appears to be a more fundamentally sound company than AMD, and therefore a more attractive investment.

NVIDIA CEO Jen-Hsun Huang was asked about AMD on the company's earnings call last November. "Our company is just on a different trajectory," he said.